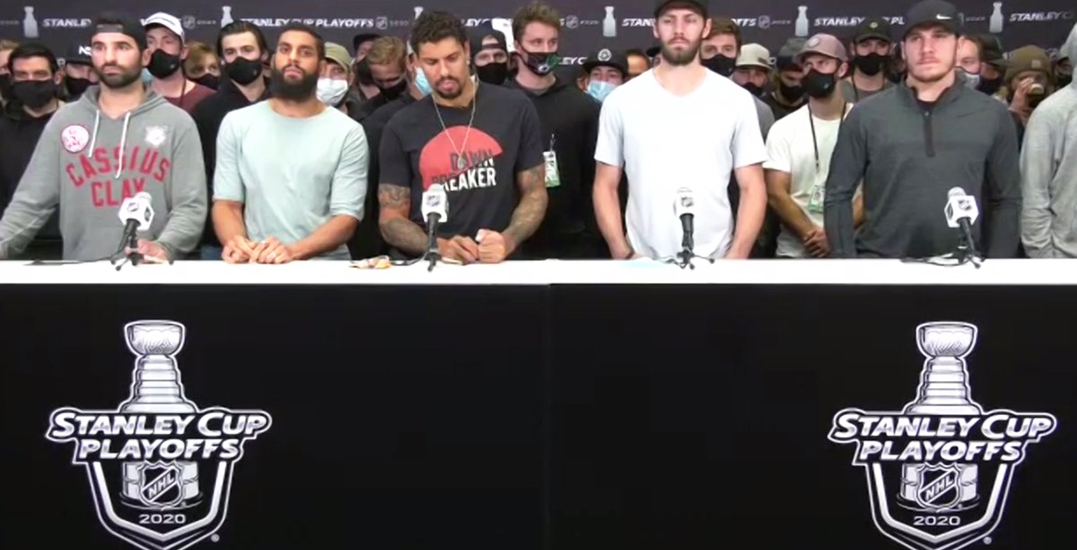 After the NHL confirmed that Thursday’s and Friday’s hockey games would be postponed, teams from the Western Conference playoff bubble spoke to the media and fans.

The league announced that four games in total would be postponed. Thursday would have seen the Vancouver Canucks and Golden Knights face off in Game 3, while Friday included Game 4 between the Colorado Avalanche and the Dallas Stars.

Vancouver Canucks captain Bo Horvat said that they met with the Vegas Golden Knights and agreed that postponing the match would “be the best form of action to take.”

Golden Knights forward Ryan Reaves added that it was a powerful statement for the players to make, especially in a league that’s mostly made up of white athletes.

“I think if you look around this room, there’s a lot of white athletes in here, and I think that’s the statement that’s being made right now,” said Reaves. “It’s great that the NBA did this and the MLB, and the WNBA, they have a lot of Black players in those leagues, but for all these athletes in here, to take a stand and say you know what, we see the problem too and we stand behind you.”

Reaves also admitted that the decision to play or walkout was something he struggled with heavily. He credited a number of players, particularly members of the Tampa Bay Lightning and the Vancouver Canucks, saying that they wanted to talk.

“I woke up to a text from [Tampa Bay Lightning defenceman] Kevin Shattenkirk and he had a bunch of guys out east there and they wanted to talk, and then I got a text saying Vancouver wanted to talk,” he explained.

“That I think was more powerful that the conversation started with white players on other teams wanting to talk. I think that’s the most powerful thing that happened today.”

During the press conference, players also hinted that more action would be taken by the Hockey Diversity Alliance to educate players, both during the bubble and beyond.

Colorado Avalanche forward Nazem Kadri, who is also a member of the HDA, confirmed that there is a plan as well as “initiatives and policies that they would like the NHL to act on,” but he said specifics would be revealed at a later date.

The four games that were scheduled to take place on Thursday and Friday will be rescheduled starting Saturday, and the league says that the remainder of the second round of playoffs will be adjusted accordingly.