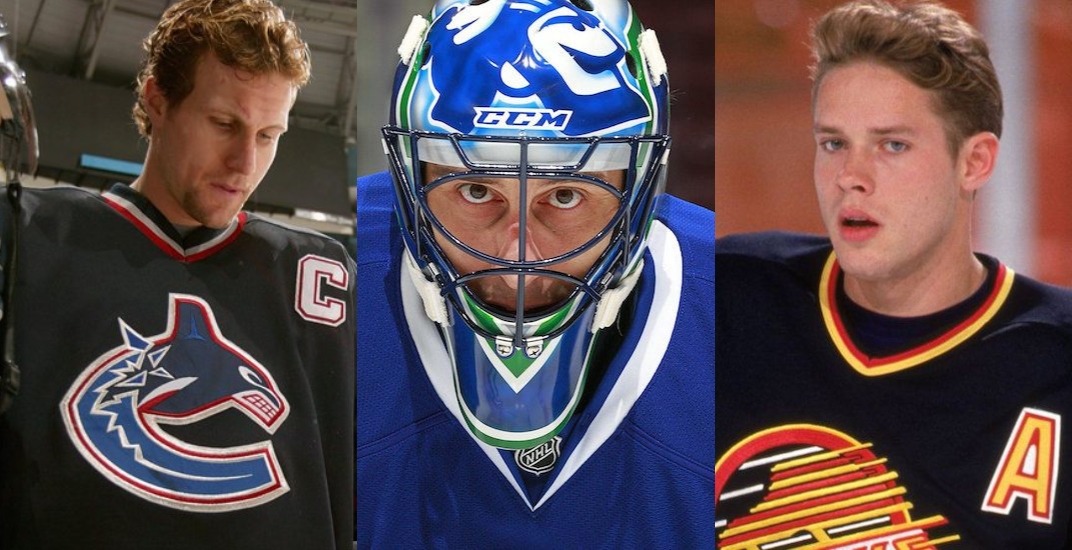 It’s mid-August. The Stanley Cup was handed out more than two months ago, and the Canucks haven’t played in over four months. The draft is long gone, and teams have finished most of their off-season acquisitions.

Do you really want to kick around what Brock Boeser’s next contract will look like again? How about weighing in on Loui Eriksson for the 100th time this summer?

OF COURSE NOT. We’re all sick of it, and October can’t come soon enough.

We here at Offside in the Daily Hive sports department aren’t the only ones dealing with hockey withdrawal. The folks over at the Athletic are going through the same thing, with Tampa Bay writer Joe Smith putting together an all-time Lightning team with the help of Martin St Louis and other former players.

When you ask #tblightning Hall of Famer @mstlouis_26 to help you choose “All-Time Lightning lineup” + he sends you handwritten picks. Had blast with this project, talking with St. Louis, Andreychuk, Bradley, Esposito + more for most complete roster of 23 https://t.co/pUc3jViJy6 pic.twitter.com/huJnY7iu3G

With the Canucks’ 50th anniversary season on the horizon, there’s no better time than now to come up with our own all-time team.

This is not an exercise in picking the highest scorers in franchise history. If we did that, Tony Tanti would most certainly make the team (you’ll see him listed with the honourable mentions later on).

You also don’t get on this team simply by virtue of long term tenure (be prepared to be disappointed, Harold Snepsts fans). But you also aren’t about to make an ‘all-time team’ unless there’s some form of longevity (sorry Anson Carter).

The era each player played in was taken into account, given that scoring goals in the 80s was a heck of a lot easier than it was in the early 2000s. We’ve also picked players based on position, with nobody playing a role they didn’t see for at least some portion of their Canucks career (Alex Burrows played both the left and right wing, don’t write any letters).

It doesn’t take a genius to put together the first line of an all-time Canucks team.

Henrik and Daniel Sedin are future Hall of Famers, while Pavel Bure has already been inducted. It also puts together the two best passers in Canucks history with the team’s most prolific goal scorer of all-time. Bure scored 60 goals twice with Vancouver — how many would he have scored with the Sedins setting him up?

Here’s the rest of the forward lines:

The under-appreciated Thomas Gradin slots in as the third-line centre. The Swedish playmaking centre should fit in well with former 50-goal scorer Alex Mogilny, and power forward Greg Adams on his wings.

Want a checking line that can also punish you on the scoreboard? Say hello to the line of Ryan Kesler, Alex Burrows, and Stan Smyl. 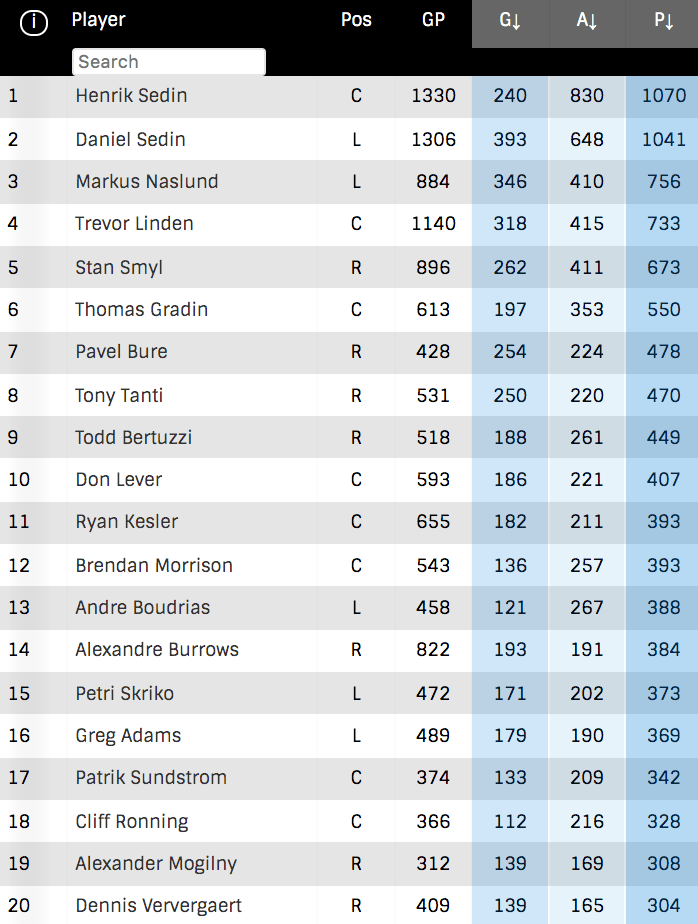 It might not be long before Elias Pettersson, Brock Boeser, and Bo Horvat make this team, but for now, there’s not enough body of work on their resumes. Here’s the list of forwards we snubbed:

The Canucks have never had a Norris Trophy calibre defenceman to call their own, but that doesn’t mean picking six blueliners (three on the left side, three that played the right side) was easy.

It wasn’t, as you’ll see in the honourable mentions.

Mattias Ohlund is no longer the highest-scoring defenceman in team history, but he was arguably the most reliable rearguard they ever had. He teams up with Sami Salo for a rock-solid top pairing.

The 2011 shutdown duo remains intact for the second pairing, with Dan Hamhuis and Kevin Bieksa.

Smooth-skating Jyrki Lumme is a left-shot, but played a significant amount of time on the right side as a Canuck. Instead of playing with Dana Murzyn, like he did for much of his time as a Canuck, we’ve paired him with the highest-scoring defenceman in team history, Alex Edler. 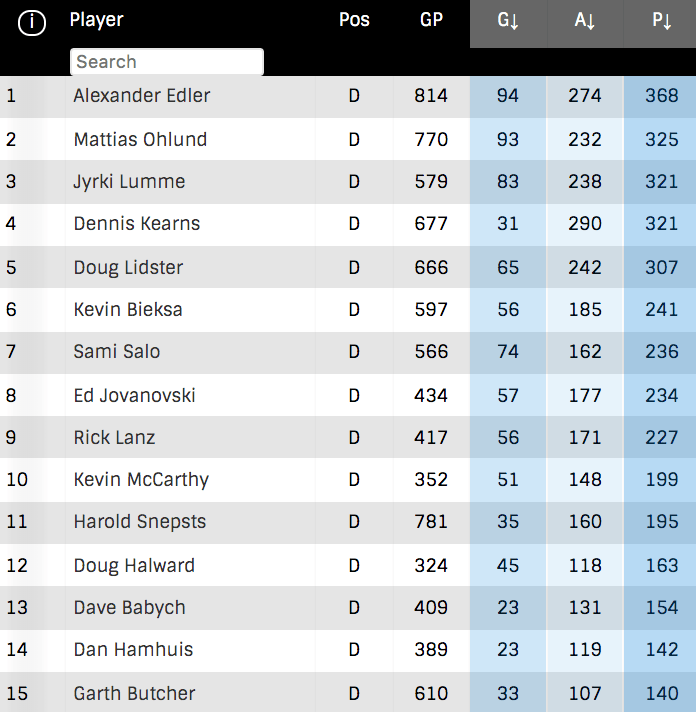 Offensive defencemen Paul Reinhart, Jeff Brown, and Christian Ehrhoff had excellent seasons with the Canucks, but didn’t stay long enough with the team. Meanwhile, Dennis Kearns and Doug Lidster had staying power, but were unable to work their way onto our roster. Ed Jovanovski fits somewhere in the middle.

Ok, this was easy.

Roberto Luongo is without a doubt the best goalie in Canucks history, and Kirk McLean is the clear-cut No. 2.

We do have some honourable mentions though. 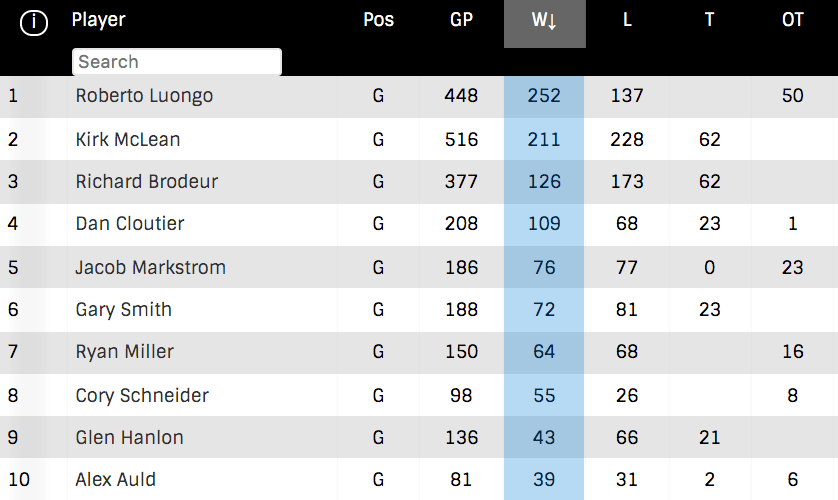 Richard Brodeur led the Canucks to their first-ever Stanley Cup Final in 1982, while Gary Smith was their MVP during their first trip to the playoffs in 1975. Cory Schneider owns the best save percentage in team history, but played under 100 games in Vancouver.