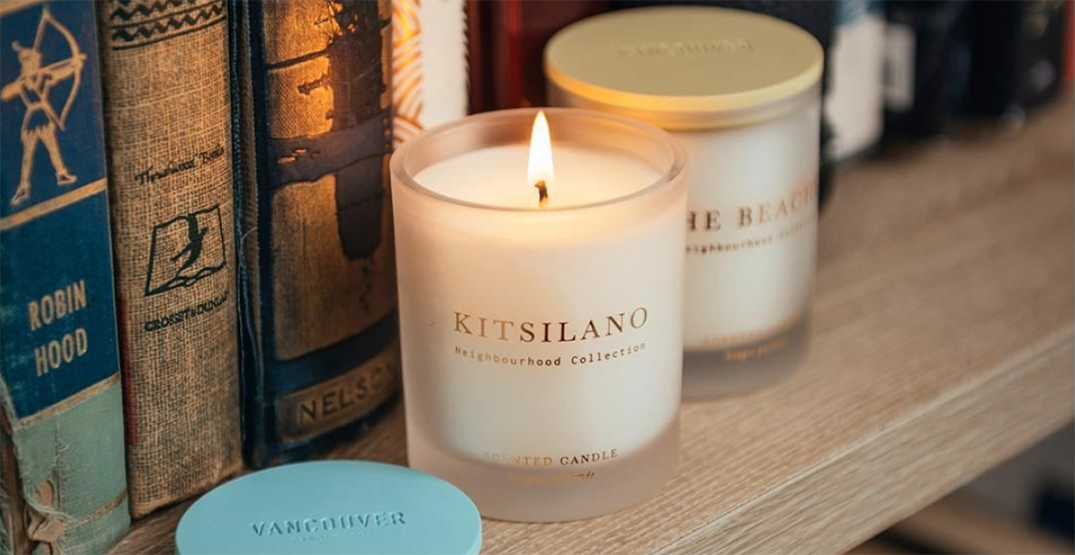 Several BC women have revealed to Daily Hive that they were subjected to harassing messages after finishing business contracts with Vancouver Candle Co., whose founder stepped away from the company last week after apologizing over screenshots of racist text messages shared online.

The women say they endured bullying, threatening messages, and in some cases, malicious rumours about their work that left them feeling scared and anxious.

Vancouver Police Department Const. Tania Visintin confirmed there is now an “active and open investigation” involving Vancouver Candle Co. But she could not identify any individuals they’re looking into until a person is criminally charged.

“It was just vile,” Christina McDaniel, founding partner of Warner McDaniel Agency, told Daily Hive. “We were terrified to the point it affected our business.”

McDaniel said she met Vancouver Candle Co.’s owners Nick Rabuchin and Farouk Babul at a craft show in 2016. She thought the couple had a nice product, and their business relationship began. Over the next two years, McDaniel said her boutique sales agency helped grow the candle company’s brand. It’s now well known for scented candles inspired by neighbourhoods in Vancouver and Toronto. 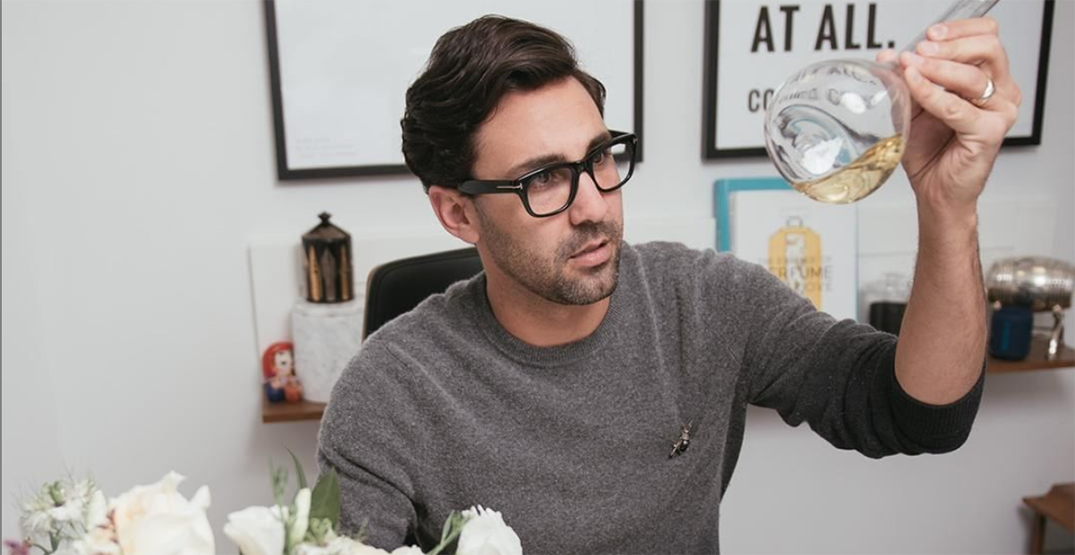 McDaniel’s business contract with them ended in 2018. She told Daily Hive the candle-maker was no longer a good fit for her agency, and she didn’t like the disparaging remarks she heard Rabuchin allegedly make about competing brands and others they worked with. For example, in 2017 McDaniel says Rabuchin texted her referring to a shop owner who carried the candles as a “fucking Jew.” 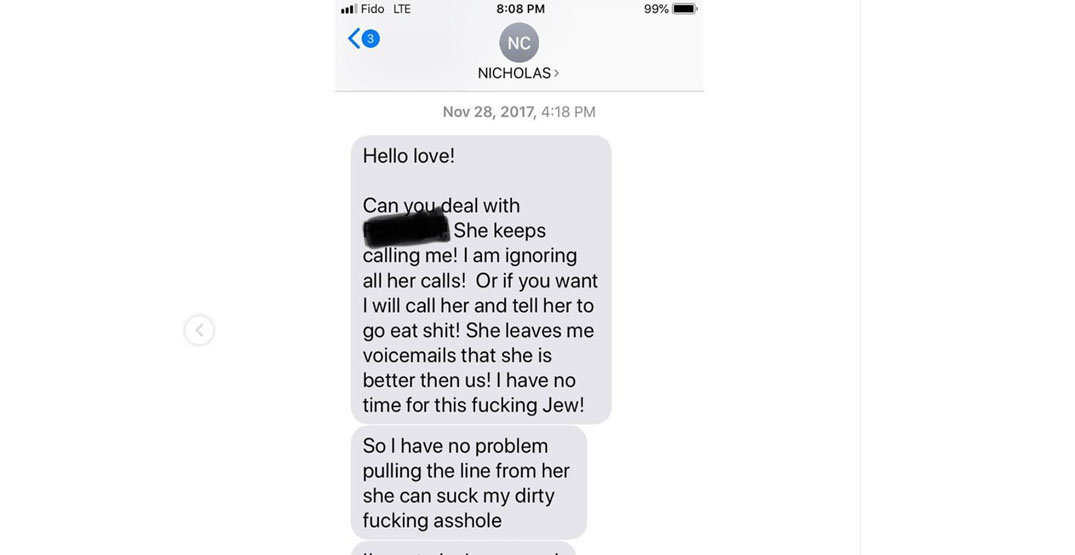 Rabuchin apologized on Instagram for sending this message about a store owner to McDaniel in 2017. (@warnermcdanielagency/Instagram)

Their parting of ways was amicable, McDaniel said, until she received a cease-and-desist letter from Vancouver Candle Co. in February 2019 after meeting with another BC candle company she was thinking of taking on as a client. The letter from Daniel Hepburn of Kornfield LLP alleges McDaniel shared Vancouver Candle Co.’s confidential information in that meeting, which McDaniel denies. She did not end up working with the second candle company.

Daily Hive has reached out to Hepburn to confirm the letter’s authenticity.

Later, in November 2019, McDaniel announced she would be working with Whistler-based Hollow Tree Candle Co. A few days later, she received a text from an anonymous number asking if she still had a store in Vancouver, followed by “I hope it burns to the ground with you in it. You fucking [N-word]. Ha ha ha.”

McDaniel, a Black woman, was shaken. 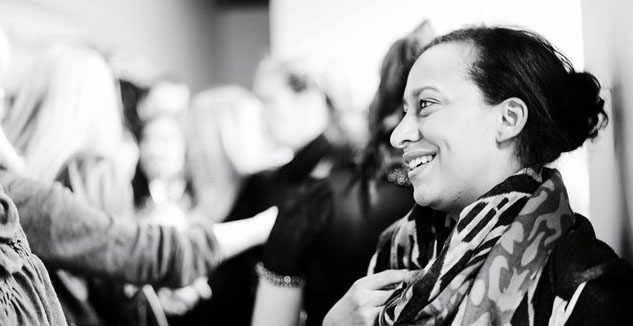 When Tobias Douglas, Hollow Tree’s owner, confronted Rabuchin about the anonymous text to McDaniel, he denied sending it but defended the use of the N-word in general. 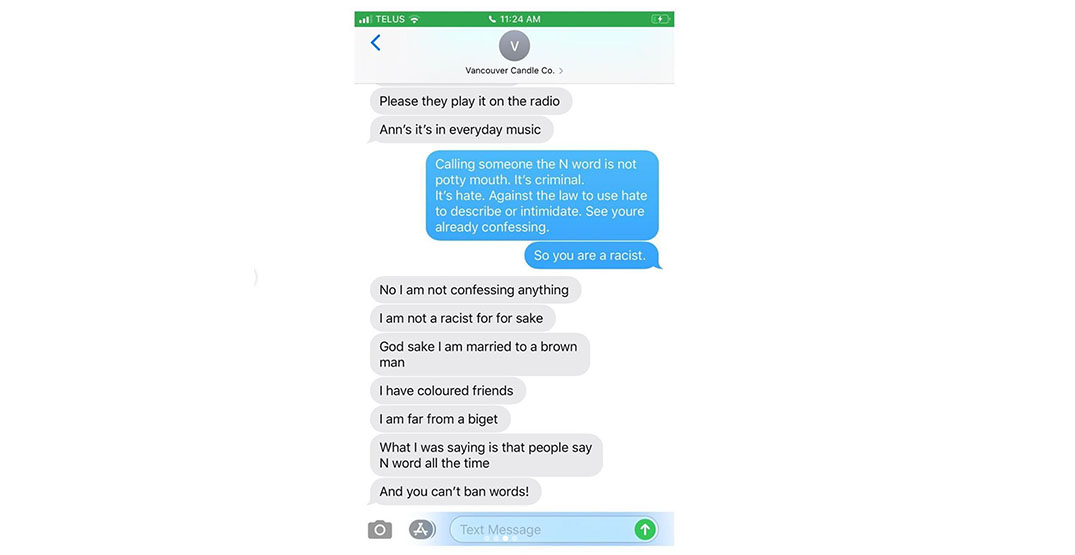 When Vancouver Candle Co. shared a Black Lives Matter solidarity post earlier this month, McDaniel thought it was disingenuous based on previous communication with the company. She decided to share screenshots of all three messages.

At first, Vancouver Candle Co. sent a cease-and-desist letter to McDaniel, which she provided to Daily Hive. Daily Hive has reached out to the lawyer who wrote it to confirm its authenticity.

But the next day, Rabuchin admitted to sending the message about the Jewish store owner and the one defending the use of offensive language, but not the one calling McDaniel the N-word. He issued an apology.

Major retailers Indigo and Nordstrom have confirmed they dropped the Vancouver brand over the issue.

Threatening messages from an anonymous number

Vancouver Candle Co. denied knowing anything about the hateful texts that wished McDaniel’s store would burn to the ground. But this week, two other women who used to work with Rabuchin say they also received rude and threatening messages on the same day from the same number. 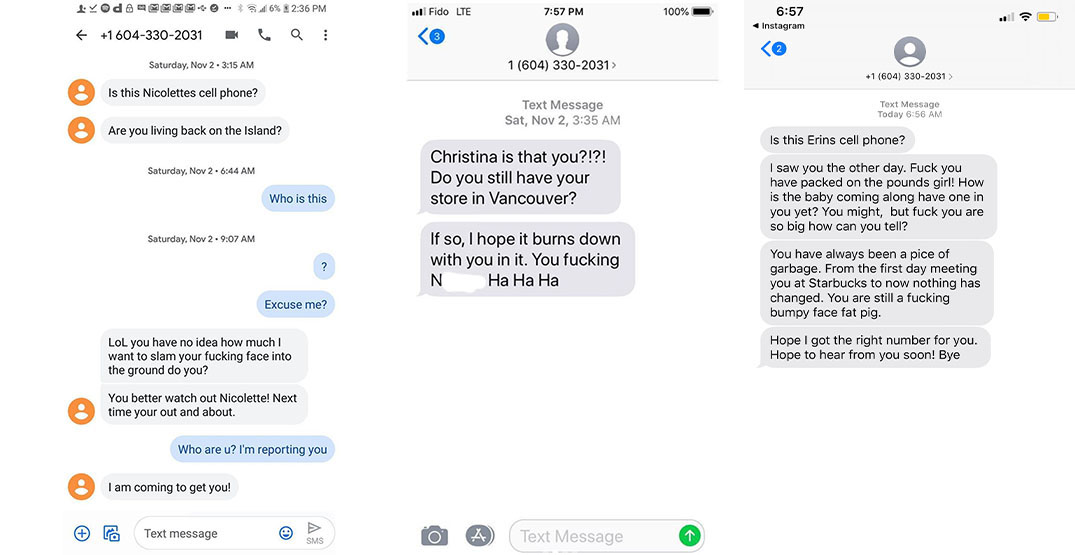 These messages received by three different women all came from the same number. (Photos submitted)

Erin Sousa, who does marketing, public relations, and social media work for businesses, also worked with Vancouver Candle Co. between 2016 and 2018. She told Daily Hive the business relationship ended because the candle company wanted to move to a style she didn’t feel she could deliver.

After that, Sousa said she received “consistent, ongoing anonymous emails that were very abusive.” She got texts from anonymous numbers criticizing her for very personal matters, such as her journey trying to get pregnant.

The text on November 2, 2019, from the same number that messaged McDaniel, said she was a “pice [sic] of garbage” and a “fucking bumpy face fat pig.”

“The thing is, all three of us have worked with this company and have these text messages that are from the same phone number, are anonymous, and were on the same date,” Sousa said. 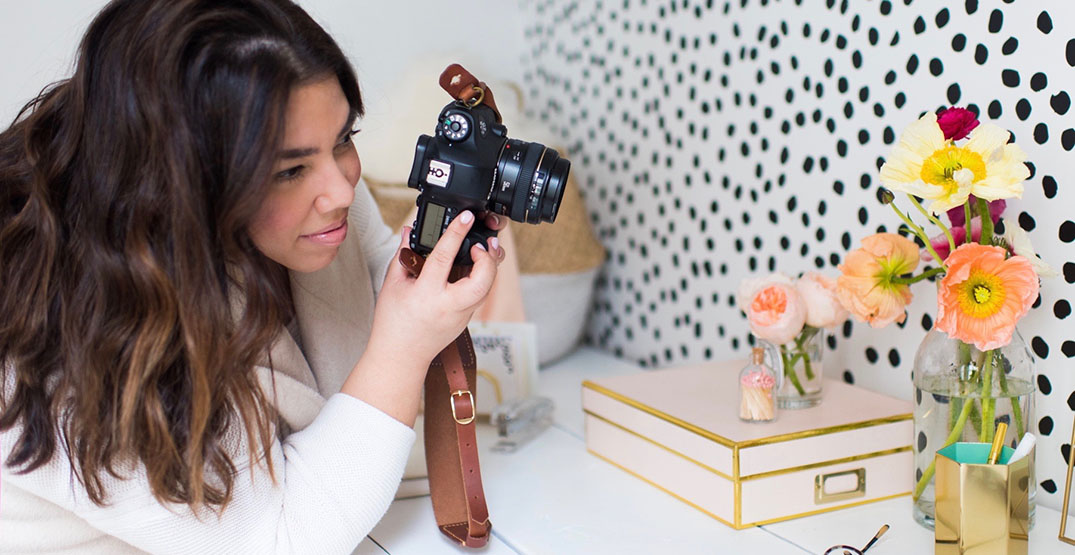 The candle company did not respond to Daily Hive’s questions for this story.

Sousa also alleges Rabuchin spread rumours to people she worked with to discourage them from hiring her. Durriya Rehan, owner of Fine Finds in Yaletown, told Daily Hive that she distinctly remembers a phone call from Rabuchin in November 2018, just after she hired Sousa on a short contract to do some photography and social media work for her business.

Rehan alleges Rabuchin called with a warning that she would “lose her business” over hiring Sousa. He allegedly told Rehan that Sousa was “nasty” and a “bully,” although when Rehan pushed him for specific reasons why he said he couldn’t tell her because of ongoing litigation. 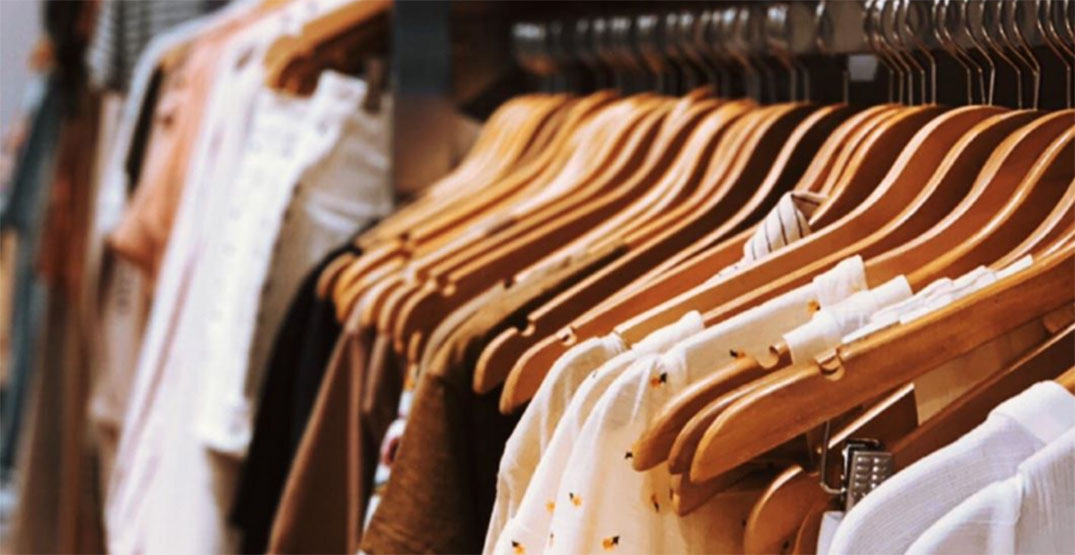 In the end, Rehan alleges Rabuchin threatened to pull his candles from her store and sell them with a competing retailer in Yaletown if she kept working with Sousa.

“I was actually really scared of losing that brand from my store,” Rehan said. Her contract with Sousa ended naturally within a couple of weeks of the call.

The third woman Daily Hive spoke with who received a threatening text that Saturday in November was Nicolette Zorić.

Zorić worked as Rabuchin’s personal assistant between April and July 2019, and signed a non-disclosure agreement during her time there, so she could not speak to specifics of her duties. But she said Rabuchin had a “very short temper.”

After Zorić left the job, she says Rabuchin reached out about an apparent miscommunication between another employee who gave Zorić a gift. After that, she received a threatening anonymous text. She had moved to Vancouver Island and wasn’t sure why the sender would know that.

The sender said Zorić had “no idea how much I want to slam your fucking face into the ground do you? You better watch out Nicolette! Next time your [sic] out and about.” 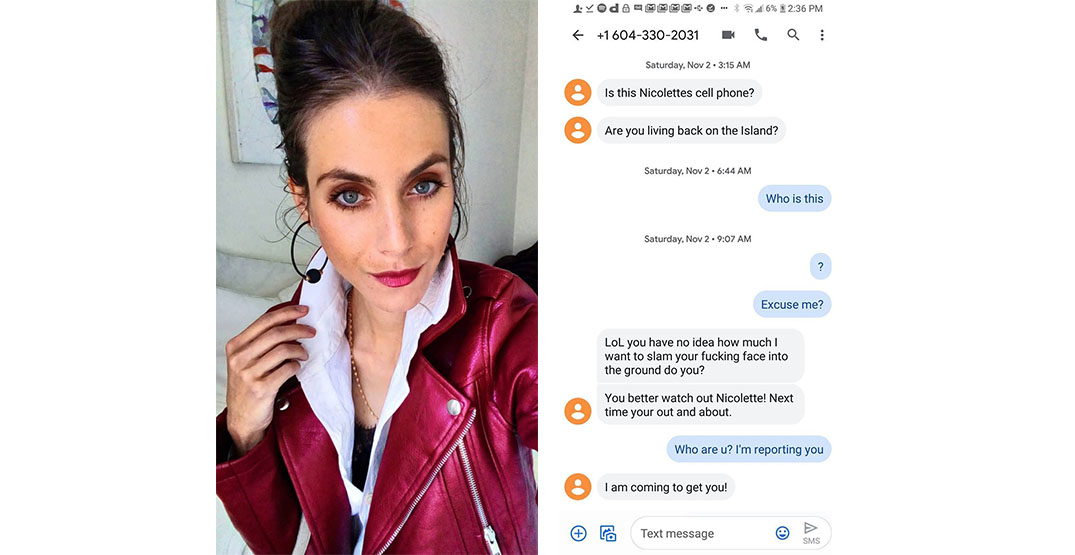 Zorić said she’s been living “on edge” ever since she got the text.

“You never realize until it happens to you how deeply impactful words are,” she said.

When Zorić confronted Rabuchin about the message, he emailed her denying it was him and apologized for how he’d treated her in the past. Zorić provided a copy of that email to Daily Hive where Rabuchin says he hopes she can forgive “this loose cannon temper I have.” 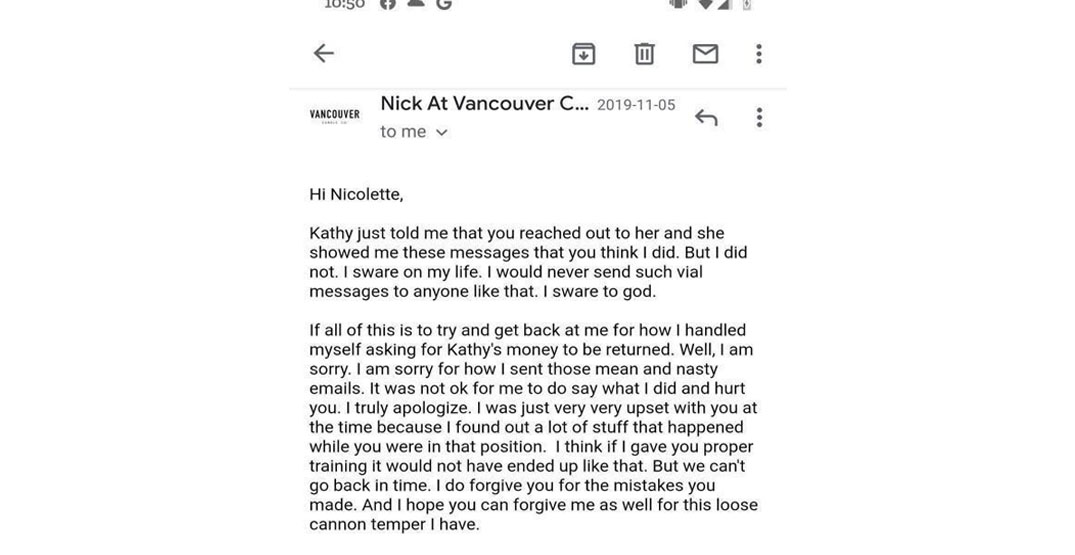 An email from Nick Rabuchin to Nicolette Zorić from November 2019. (Photo provided)

Recently, a June 7 cease-and-desist letter from Vancouver Candle Co.’s lawyer to McDaniel accused her of sharing Rabuchin’s phone number on Instagram without his consent.

But the only message screenshot with a visible phone number is the number that also texted the other two women.

Rabuchin denied knowing anything about this number in his Instagram apology and did not respond to questions about why his lawyer accused McDaniel of sharing his phone number. Neither the candle company nor the lawyer responded to questions about the veracity of the cease-and-desist letter.

McDaniel first approached police in November 2019 about the harassing messages, and Sgt. Aron Roed with the Vancouver Police Department confirmed they investigated, but told Daily Hive nobody was arrested. A new investigation has been opened with information from the other women.

In the middle of all this, Vancouver Candle Co. is being sued for defamation by Whistler-based Hollow Tree for alleged attempts to discredit the business. 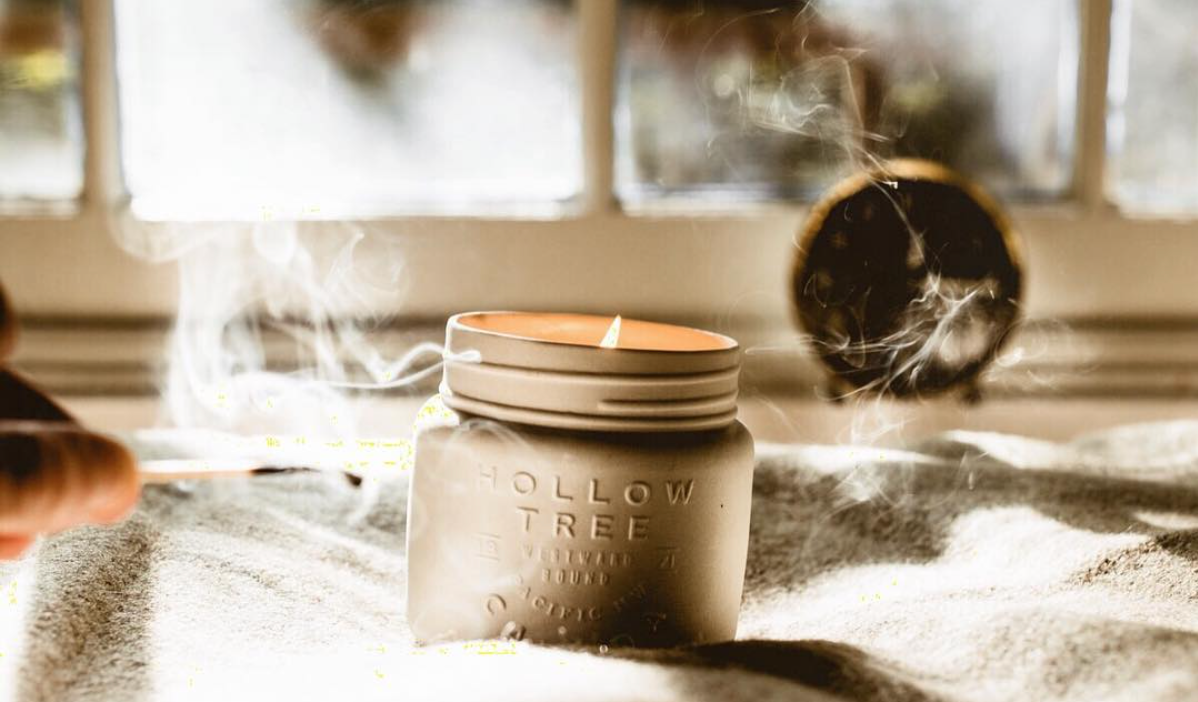 Rabuchin referred to this “ongoing litigation” on Instagram as a reason he couldn’t say more when he wrote his apology.

The alleged harassment culminated with someone uploading a Nazi video to YouTube with English subtitles suggesting the soldiers are receiving shipments of Hollow Tree candles. At the same time, two people who give their names as Sydney Freedman and Nadine emailed more than a dozen of Hollow Tree’s retailers directing their attention to the video. The court documents allege Vancouver Candle Co. was behind it.

Douglas, Hollow Tree’s owner, said her company had nothing to do with the video and immediately asked YouTube to take it down and filed a report with the Whistler RCMP. Sgt. Paul Hayes confirmed police investigated, but said no arrests were made.

Douglas said the debacle negatively impacted their sales, causing them to lose an account with major retailer Holt Renfrew.

She also forwarded Daily Hive an encrypted email sent to her that called her a “stupid fuck” and the “candle Sasquatch.” It finished by saying “stop or we will come after you as well. I will leave it at that.”

“You wake up in fear,” Douglas said, saying she remembers “racing to my computer to check to see if there’s emails, if there’s anything out there, videos on the internet.”

Hollow Tree is seeking damages as well as an injunction to prevent Vancouver Candle Co. from slandering or libelling their company in the future.

In its response to the court, Vancouver Candle Co. denies all the allegations, saying Hollow Tree has no proof it produced and uploaded the video to YouTube.

“The Defendants have nothing to do with this video,” their response said.

Daily Hive attempted to get in touch with Vancouver Candle Co. and two of its lawyers for this story through email, phone, and social media messages. Neither the company nor the lawyers responded before time of publication.