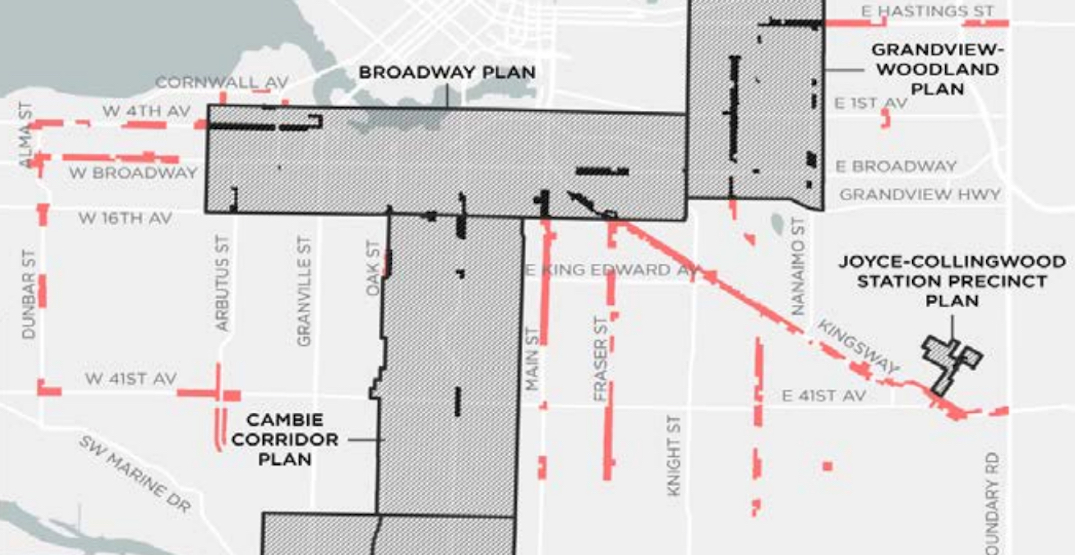 Developers and property owners of select commercial districts along arterial streets across Vancouver will have the option of building taller and denser developments if they construct secured rental-only housing for the residential component of their projects.

In a meeting Tuesday morning, Vancouver City Council sent the amendments to the zoning and development bylaw for C-2 commercial districts to a public hearing later this summer. Currently, the zoning allows for four-storey buildings with the typical configuration of commercial uses on the first level and residential uses on the upper floors, but the residential portion is typically stratified condominiums.

With the changes, developers can still develop four-storey buildings with condominiums, but the policy intends to encourage more rental homes.

The new residential rental tenure zoning permits buildings up to six storeys, with the ground-level dedicated to retail space, the second level for either office or rental housing, and the upper four levels for rental-only housing. 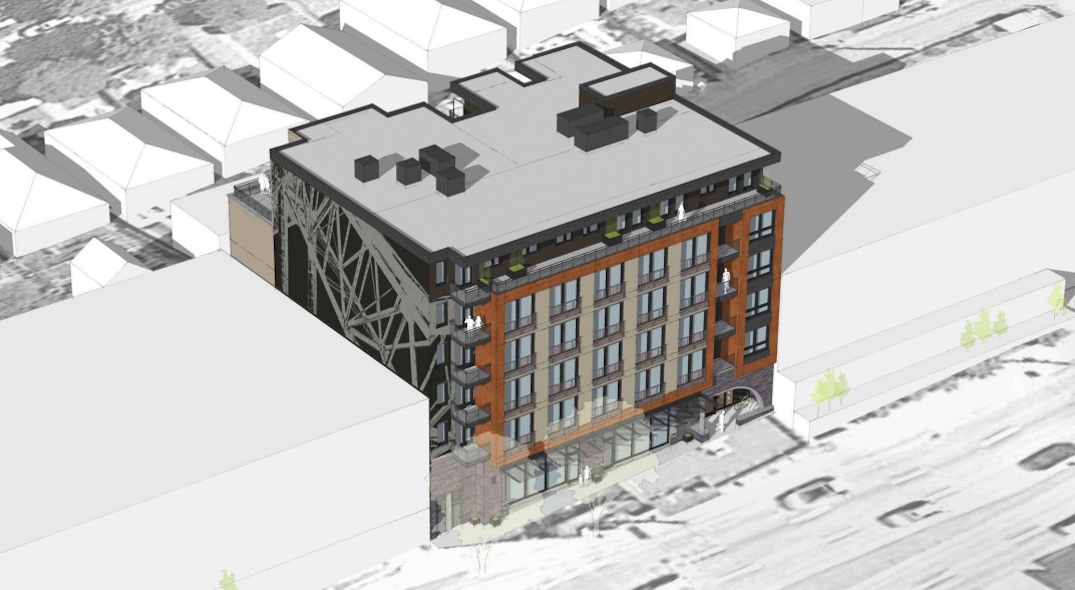 The added two floors provides developers with the incentive to consider this rental housing tenure option, which helps account for the long-term timeline for property owners and investors to see a return in their investment, compared to the quick return seen with condominiums.

Other requirements mandate that 35% of the homes be sized for larger families with two bedrooms or more, and that these buildings fulfill enhanced green building requirements, such as the Passive House design standard.

The amended C-2 zoning districts for residential rental tenure development only apply to areas outside of recently approved community plan areas, such as the Cambie Corridor, Marpole, and Grandview-Woodland, as well as outside areas currently undergoing planning processes, specifically the Central Broadway Corridor. 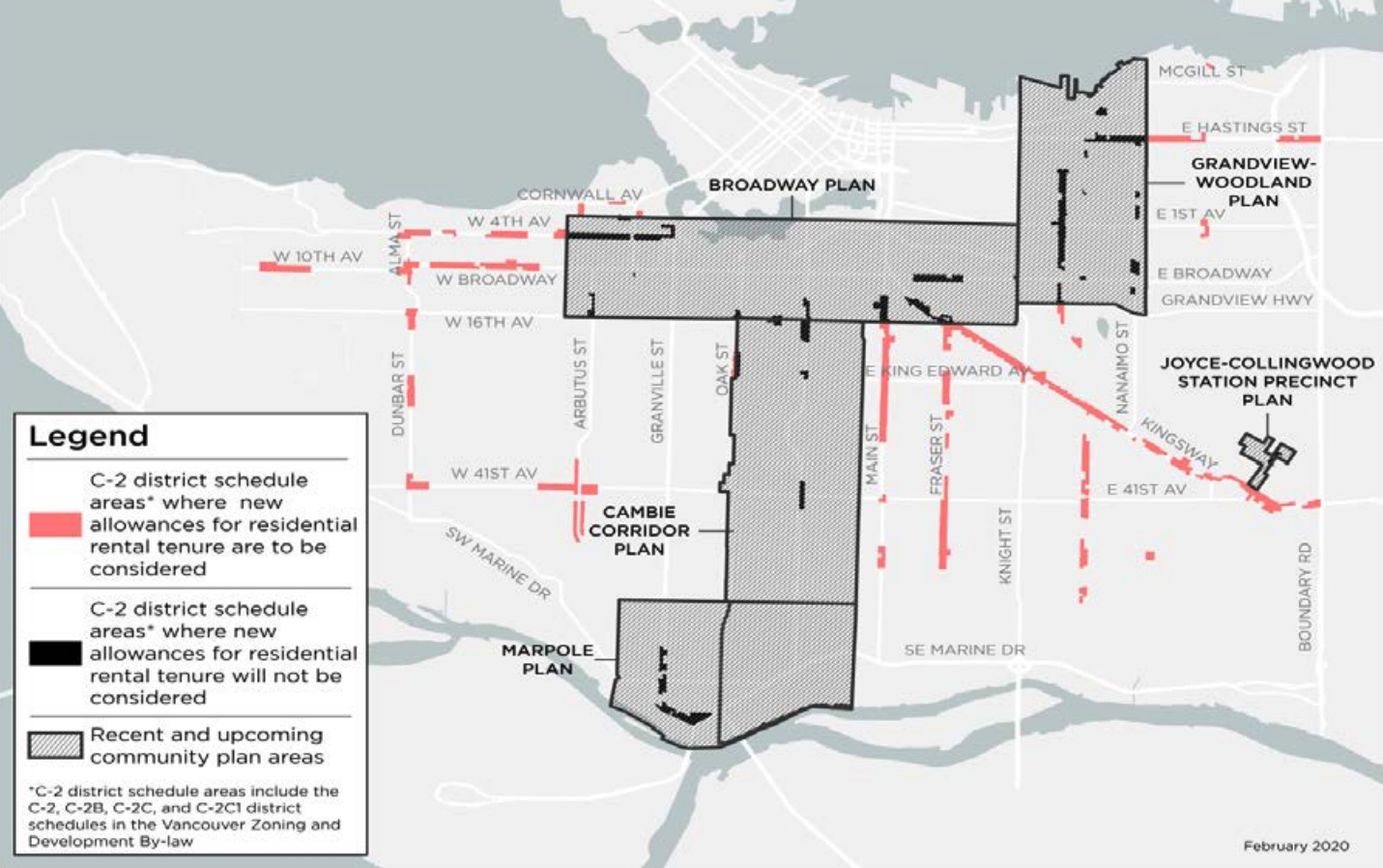 Previously, such projects would have to pursue a rezoning application, but with the changes developers can go straight to the development permit process, potentially shaving off between one and two years from the application and review timeline.

Based on the findings by both city staff and an independent consultant, the city does not anticipate to see a significant change in new rental housing built within C-2 zoning, but there will be a shift from some of the anticipated condominium developments to rental.

This is the City of Vancouver’s first use of the rental tenure zoning first granted by the provincial government in May 2018. It follows city council’s November 2019 approval that directed staff to implement a number of new rental housing policy measures, including amending C-2 zoning districts to allow six-storey rental buildings.

As part of the series of measures, city staff is expected to return to city council later this year on the zoning changes allowing four-storey residential buildings on some side streets adjacent to arterial roads.

Currently, the city has approved 15% of its new purpose-built market rental housing target of 20,000 units over 10 years, between 2018 and 2027. The city is not on track to meet this target.

Editor’s note: This article has been edited to reflect the amendments will go into public hearing.