After years of steady growth and amazing support from all wakes of bike-loving life in Vancouver, the official Bike Rave has grown to a size that can no longer simply exist under the radar as it has been.

Last year (and every year) the VPD was awesome. They approached me just a few days before the event due to a park space conflict, which would have been avoided if we had conventionally booked the park through the park board. They sent about 7-10 bike officers to monitor the event and ride with us, never charged us any fees or even talked about fines, and were genuinely nice to everyone. They legitimately support the event and recognize the leading example we have continued to set for mass gatherings.

However, there is also the reality that they received HUNDREDS of 911 calls from over reactive and nervous citizens. Literally old ladies afraid of riots or some invasion, locking themselves in their bathrooms and calling repeatedly for the 2 hours it took us to pass. Otherwise mostly just noise complaints, which we have all counter argued are not as bad as Canucks games, people can learn to simmer down, etc etc, but that doesn’t negate the calls.

There were hundreds of open alcohol incidences (technically against the law although arguably not harmful) but again no fines.

Now the officers that get assigned to these sorts of things cannot be from their regular schedule, thus receive double time pay, which comes to about $4-5000 in total.

I wish that citizens assuming their own responsibility and risk, and simply not needing police was an option, but at 7000 people last year, it’s not. The city feels a responsibility at that size to be present, and thus wants proper registration and fees, or will be looking to hold somebody responsible and fine. I am not willing to be that person.

So, Cranked Cycling is officially not organizing a bike rave this year. There continue to be many smaller delightfully themed rides weekly, and if a whole bunch of people happened to show up somewhere for a late night bike ride in August, that would be pretty neat.

Peace love and bikes. Let’s continue to be a positive and leading example of excellent, active, caring people continuing to enjoy life in this beautiful city. 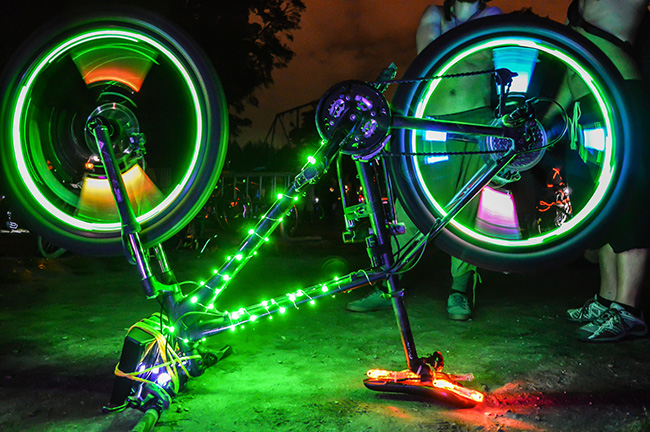 To say we at Modacity are disappointed with this latest development would be an understatement. On the surface, the Bike Rave is a simple enough concept; a self-described “annual glowtastic mobile dance party on wheels” that, for the past six years, has taken over the seawall for a single night of partying, pedalling, and dancing. But above and beyond that, it is much, much more: a cultural phenomenon slowly spreading around the world (inspiring iterations in Melbourne, Toronto, Whistler, Squamish, and Auckland), altering how people think about the cities in which they live. 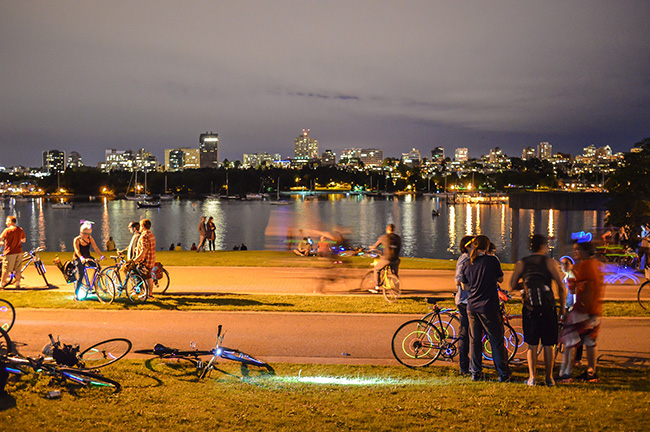 Over the years, the Bike Rave has gone from a few dozen hard-core ravers at its first iteration to an amazing 7,000 Vancouverites (of all ages, sizes, and backgrounds) in 2014. For many, it has become the undisputed highlight of the summer social calendar, and the fact that it takes place on bicycles is almost an afterthought. Subversively, it serves as an effective gateway to cycling for transport, giving folks the perfect excuse to get on a bike, often for the first time in years. It also provides a rare opportunity to collectively celebrate the city within the shared realm of its public pathways, plazas, and parks. 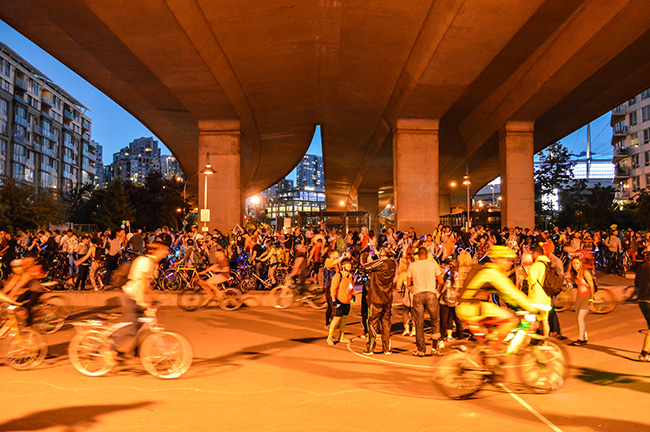 However, in the face of its runaway popularity, this improbable marvel seems to have become a victim of its own success. Cooperating with authorities to provide adequate signage, supervision, barriers, and washroom facilities appears to be too big of a task for this small group of volunteers (and we can’t fault them for it). We sincerely hope someone with the resources (ie. HUB or the City of Vancouver) steps up to take the reins, because there’s no reason the Bike Rave can’t join the ranks of Montreal’s Tour la Nuit and Los Angeles’ CycLAvia and become one of North America’s biggest – and best – open streets events. It would be a tremendous shame to see all of this momentum lost.