As a veterinarian who cares deeply about the conservation and welfare of marine mammals, it may seem strange to find Dr. Martin Haulena of the Vancouver Aquarium pointing the crosshairs of a gun at a sea lion and pulling the trigger. Last week, Dr. Haulena’s targets were weak, injured sea lions tangled in garbage and his gun was loaded with tranquilizing darts. His mission was to save helpless marine mammals who would have otherwise suffered a painful demise.

Dr. Haulena and the rescue team travelled by boat along the western coast of Vancouver Island in search of helpless sea lions accidentally ensnared by marine debris. Armed with tranquilizers, he quietly approached a group of sea lions resting on rocks. After immobilizing the animals, the veterinary team carefully removed a fish-packing strap that encircled the neck of the first marine mammal. Dr. Haulena made incisions in the strap that was slowly choking the second sea lion, but was unable to entirely remove the debris because the animal’s skin had grown over it. 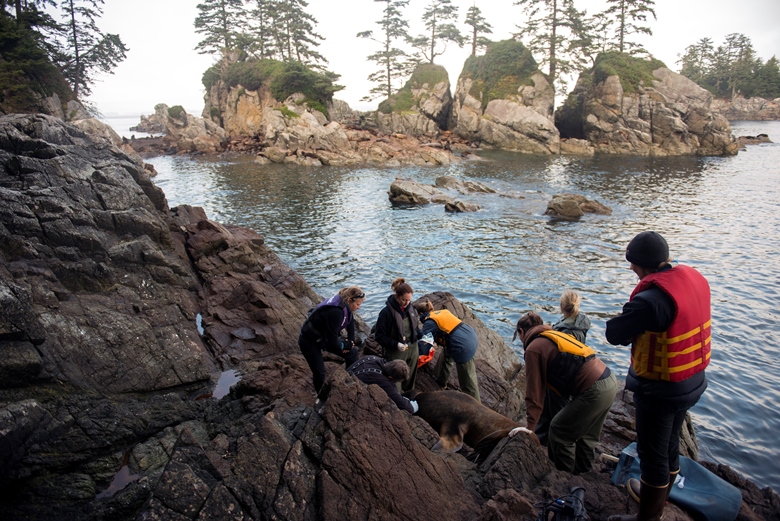 The disentanglement of these two sea lions was part of a groundbreaking project led by the Vancouver Aquarium, and marine mammal consulting biologist Wendy Szaniszlo, to free sea lions from marine debris and fishing gear in the Barkley-Clayoquot region. With assistance from Fisheries and Oceans Canada and Parks Canada, the collaborative project will also develop disentanglement techniques that currently do not exist to save sea lions.

“We have been working with several people for many years to try to develop a safe and effective darting protocol for sea lions,” says Dr. Haulena. “This was the first time anyone has successfully darted and disentangled a sea lion in the wild in Canada, representing a great leap forward in our rescue program.”

The Vancouver Aquarium Marine Mammal Rescue Centre is no stranger to the unfortunate intersection of humans and marine mammals. In 2011, the Aquarium rescued “Flash,” a California sea lion that had ingested four feet of fishing equipment. After removing a hook lodged in his esophagus and nursing him back to health at the Rescue Centre, Flash was successfully released back to his home waters. The Rescue Centre is currently caring for a rescued sea otter suffering from gunshot wounds.

The Vancouver Aquarium would like to thank Fisheries and Oceans Canada, Parks Canada, Brian Gisborne of Juan de Fuca Express, for their assistance, and the Canadian Wildlife Federation for providing a grant for this important project.