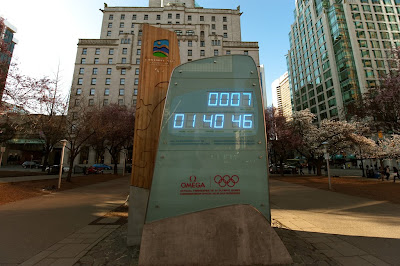 Well Vancouver, the Paralympics are about to kick off this Friday at the sold out opening ceremony at B.C. Place (many of the events are also sold out). I think it’s great that Vancouver has embraced the 2010 Paralympics as well. I know it won’t match the scale of humanity that gathered downtown like the 2010 Olympics did, however, with LiveCity Downtown set to remain open and lots of free events at the Paralympics, expect downtown to be a bit busier than usual. Here is the schedule for LiveCity Downtown (located at Cambie and Georgia).
Keep in mind that it is FREE and great place to take the family. The lineups will also be a lot shorter, so if you missed out on something during the first go around, now is your chance.

As you can see from the schedule the party wraps up a bit earlier and won’t happen every day. As of right now I don’t know if there are plans for fireworks, I have also heard Robson Square might be shelving the fireworks. More on that when I find out. Also at the LiveCity Downtown site check out the Canada Pavilion, CentrePlace Manitoba and Vancouver Paralympic House.

Photo via Kanpeki Yume from the Vancity Buzz Flickr pool.