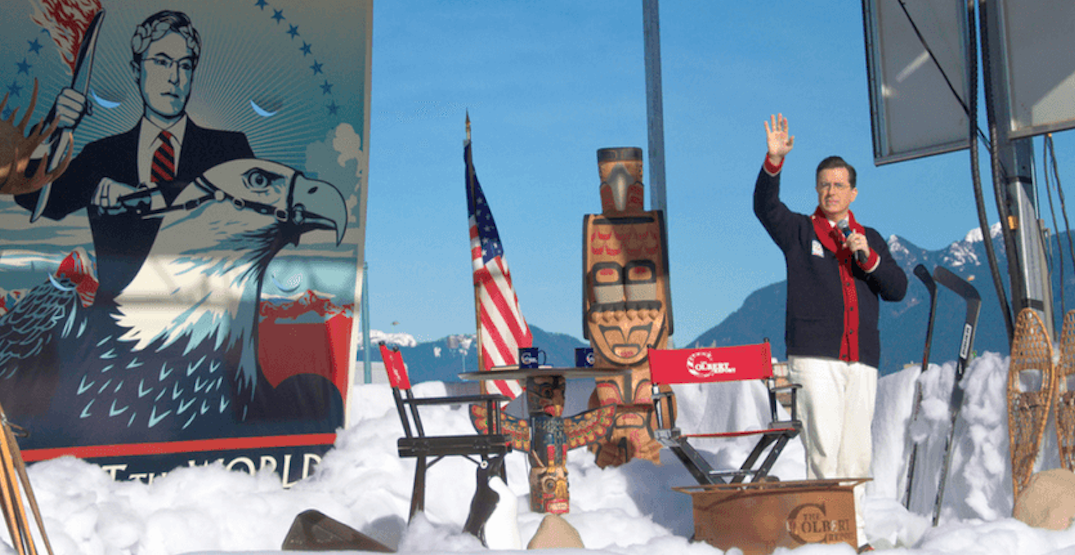 There’s no shortage of stories from the Vancouver 2010 Olympics.

Whether it was Crosby’s golden goal for Canada, Wayne Gretzky lighting the Olympic cauldron, or local snowboarder Jonny Lyall sliding into BC Place Stadium in spectacular fashion for the welcome segment of the Opening Ceremony, for those who witnessed the spectacle in-person or on TV, memories were created, stories were told, and unforgettable moments were captured.

But for Kevin Quinlan, one of the most memorable stories was something that, in the end, didn’t actually end up happening, but that he’ll never forget.

Quinlan, who worked as chief of staff for former Vancouver Mayor Gregor Robertson, recounted on Twitter how late-night talk show host and funnyman Stephen Colbert almost became Vancouver’s mayor for one day during the 17-day event.

“One of my best memories…was the event that almost happened, got spiked at the last minute, and no one ever knew about it,” Quinlan writes.

During the Olympics, Quinlan was part of the city’s communications department. A few days into the event, a producer from The Colbert Report called to ask if the city had any interest in a special segment with Robertson.

“Wasn’t even a question,” writes Quinlan. “Of course we did. I had grown up watching Colbert when he was on The Daily Show so I was pretty excited.”

The idea was that Robertson would do a sit-down piece with Colbert. “Stephen wanted to be mayor for a day,” says Quinlan. “They asked us all sorts of questions about what powers Gregor could confer on him. Not really any, we said.”

Instead, the team came up with “a package of things we could offer Stephen. Gregor could proclaim a ‘Stephen Colbert Is Mayor Day’ in Vancouver. They liked that,” Quinlan writes.

Staff also agreed that Robertson “could do a faux ceremonial handover of the city’s mace. They REALLY liked that,” he continues. “City Protocol staff started freaking out. ‘The mace will need to be cleaned after!’ We were like, ‘I think the mace will survive.'”

Taking it one step further, “Colbert’s team wanted to know if they could access the roof of City Hall. They wanted to have Stephen up top with a megaphone, speaking to people down below that he was now their mayor,” Quinlan recounts. “We were like, ‘Sure, why not?’ [The] producer also asked if they could replace the Vancouver flag and raise a Colbert Report/pirate-style flag to mark the occasion of Stephen being mayor. Our answer: Yup.”

So far, things were going to plan.

“At this point during the games, it was when the weather went sunny, and everything started going our way. Canada was raking in gold medals every day. Huge street parties every night. And now The Colbert Report was coming to City Hall? Amazing,” Quinlan recalls.

In Quinlan’s words, “Everything was lined up.” The interview was to take place at the Four Seasons Hotel.

Then, “a huge snow storm hit out east.” Colbert was unable to fly out as a result, and one day was cut from his trip to Vancouver.

And while there were still the big public shows down at Science World, there would be no “‘Stephen Colbert Is Mayor Day’ in Vancouver,” Quinlan writes. “The mace remained in its protective case, where it was safe from the elements.”

And that is, he writes, “the story of The Colbert Report episode in Vancouver that never happened.”