As technology makes our life easier, cities are having trouble integrating all these components without cluttering the urban fabric of a city. The V-Pole (Vancouver Pole) is a wireless data, electrical vehicle charging, neighbourhood bulletin board post that is also an LED lamp post that could eliminate some of that clutter. The concept was unveiled today at the the New Cities Summit in Paris by Vancouver artist/writer Douglas Coupland.

If implemented this would be a great urban innovation and another thing Vancouver has introduced to the world of urban planing. 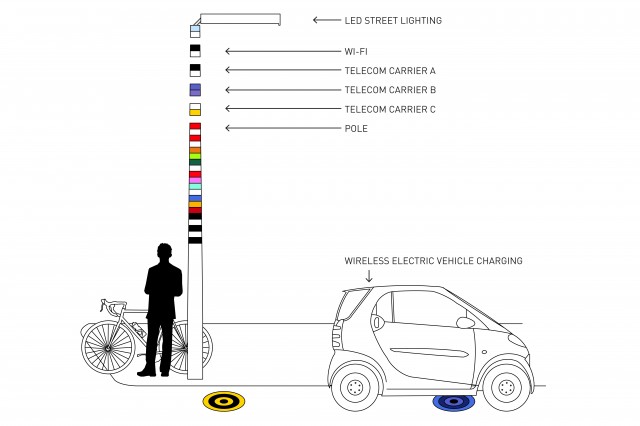 From the official press release:

The V-Pole (‘V’ for Vancouver) is a slim, modular utility pole connected to underground optical wiring. In a simple Lego-like manner, it can be installed in urban settings and provides neighborhoods with wi-fi and mobile wireless, LED street lighting, electric vehicle charging, parking transactions and can act as an electronic neighborhood bulletin board.

The V-Pole will be more energy-efficient and cost-effective than the current generation of utility structures found on city streets, and will reduce visual clutter along the streetscape.

“The wireless data game has changed,” said Coupland. “Data transmission is no longer something scary you don’t want in your back yard. Now you want it directly in front of your house.”

Coupland began investigating ways of creating open source wireless over a year ago and encountered a technology called the lightRadio™ while doing research for a book at Bell Labs in New Jersey.

“It’s a remarkable coincidence that just as I was looking for an enabling technology, the lightRadio™ dropped in my lap,” said Coupland.

A reduced-wattage device the size and shape of a Rubik’s cube inside the V‑Pole eliminates the need for huge outdated boxes filled with wires and switching equipment.

Coupland was joined by Vancouver Mayor Gregor Robertson during the announcement.

“Vancouver is a leader in urban innovation and we are always looking at ways to stay on the sharpest edge of technology,” said Robertson. “The V-Pole is an example of future-driven design for cities that we are excited to see.”

“The City of Vancouver is signaling its belief that the future is about smart, open-source technology,” said Coupland. “This is an inevitable technology and a massive entrepreneurial opportunity. Urbanites want what the V‑Pole provides. Now is the time for partnerships and alliances to begin.”

Coupland forecasts that in the future people will think of computing merely as a utility, like a plug in the wall. Information will no longer require huge mainframe systems, hard drives or products that come in boxes.

“In three years there will be thirty times more wireless data traffic than there is now,” said Coupland “Unless we act quickly, our streets could be as cluttered as a kitchen junk drawer. No one wants that.”

“The V-Pole will do vastly more using a smaller footprint, anticipating the increasing utility needs of cities,” said Coupland. “It also provides a visually-compelling template reflecting the distinct character of neighbourhoods, “ said Coupland.

“Enabling new generation communications, data and zero emission transportation is a key goal for Vancouver,” added Robertson. “An idea like the V-Pole will drive the pace of innovation and spark creative partnerships between cities and utilities. Integrating smart technologies in street poles can make cities more efficient while delivering better services to citizens.”

Finally Coupland adds, “I’m not interested in this as a personal business venture. I’m presenting this only to get people thinking about the future. The V-Pole is a whole new way of approaching how we develop and democratize what can only be described as an inevitable force that’s headed towards us like an asteroid at full speed. And we can turn it into art.”