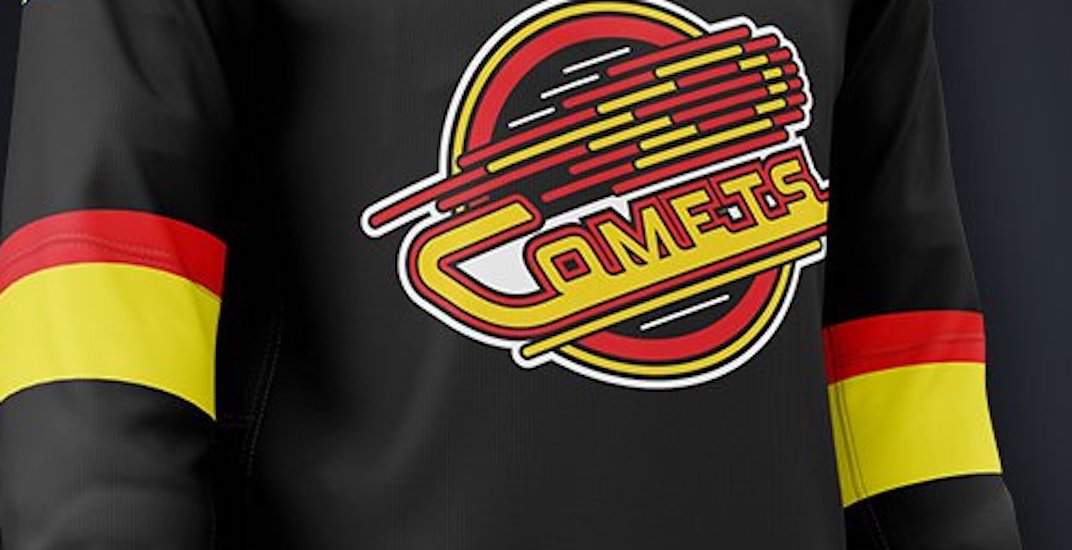 The marketing geniuses behind the Utica Comets have come up with another gem, as the Vancouver Canucks’ farm team unveiled a new specialty jersey today.

The Comets will wear Canucks Flying Skate inspired uniforms twice this season, on February 29 and March 11, with the jerseys auctioned off on March 11.

The Comets will wear these specialty jerseys on February 29 and March 11. The jerseys will be auctioned off multiple ways following the March 11 game. pic.twitter.com/ETpCo7BTgD

A closer look at our Copper 7 Series jerseys. pic.twitter.com/1GQayZRLxb

Utica’s version of the classic 1990s logo replaces the boot with a streaking comet, while the word “Comets” replaces “Canucks” on the skate blade.

Vancouver’s farm team is following in the footsteps of its parent club, as the Canucks wore the black version of their Flying Skate uniform on November 16. They’ll wear black, red, and yellow twice more this season at Rogers Arena — on January 4 against the New York Rangers and for Legends Night during Sedin Week against the Nashville Predators on February 10.

The Comets are incorporating their version of the black, red, and yellow uniforms look into the “Copper 7 Series,” paying homage to the city of Utica, and for some reason, their seventh anniversary.

Introducing our Copper 7 Series Capsule Collection – a limited edition series that pays homage to the @CityofUtica and a 7-year history of the most passionate, loyal fans, including apparel, a gift for season ticket members and a custom jersey!

This isn’t the first time the Comets, who usually wear Canucks colours, have introduced a popular alternate jersey. Utica debuted a green third jersey in 2015, which has been the envy of some Canucks fans ever since.

The #Comets announce the debut of a green third jersey for the 2015-16 season.#CometsTV: https://t.co/UH5WpFvgIW pic.twitter.com/JoZP6piJgU