A new study out of the United States says using hands-free devices for talking on the phone or texting while driving might present its own dangers.

The devices are legal in B.C., but the American Automobile Association says drivers stay distracted for up to 27 seconds after using a hands-free device. The study was released as the third part of a series by AAA looking into the cognitive effects using hands-free devices have on drivers.

“The lasting effects of mental distraction pose a hidden and pervasive danger that would likely come as a surprise to most drivers,” said Peter Kissinger, President and CEO of the AAA Foundation for Traffic Safety in a statement.

“The results indicate that motorists could miss stop signs, pedestrians and other vehicles while the mind is readjusting to the task of driving.”

The study indicates that being distracted for 27 seconds behind the wheel equates to driving the length of three football fields while traveling 40 kilometres per hour.

And not all hands-free devices are created equal. The Chevy Equinox was rated as having a “moderately distracting” system while the device in the Mazda 6 was considered “very distracting.” 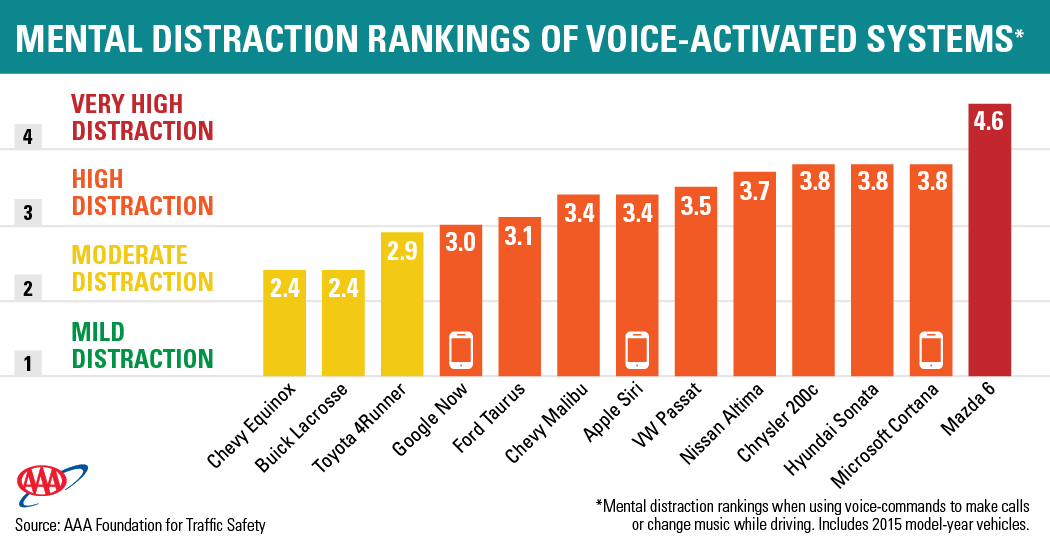 Road Safety Program Manager with ICBC Mark Milner tells Vancity Buzz that there are many conflicting reports about the distracting nature of hands-free devices.

“The AAA study and a number of other studies have found that hands-free devices are just as distracting as handheld devices, and they focus on the cognitive distractions,” he says.

“There are a number of other studies out of places like Virginia Tech Transportation Institute that hasn’t found much evidence of cognitive distraction when people are driving and using these devices.”

“They can get fairly frustrated with them. Currently, all hands-free devices are legal, but they’re not all created equally and some of them require you to physically interact with them and we would recommend that people not use those.”

He says if you want to use a hands-free device, practice on it before using it while driving.

“Then you can use the system without having to take your hands off the wheel, without looking away from the road before you ever try to use it in traffic.”

Ultimately, Milner said the best advice is to not use your phone at all while driving, whether it’s hands-free or otherwise.