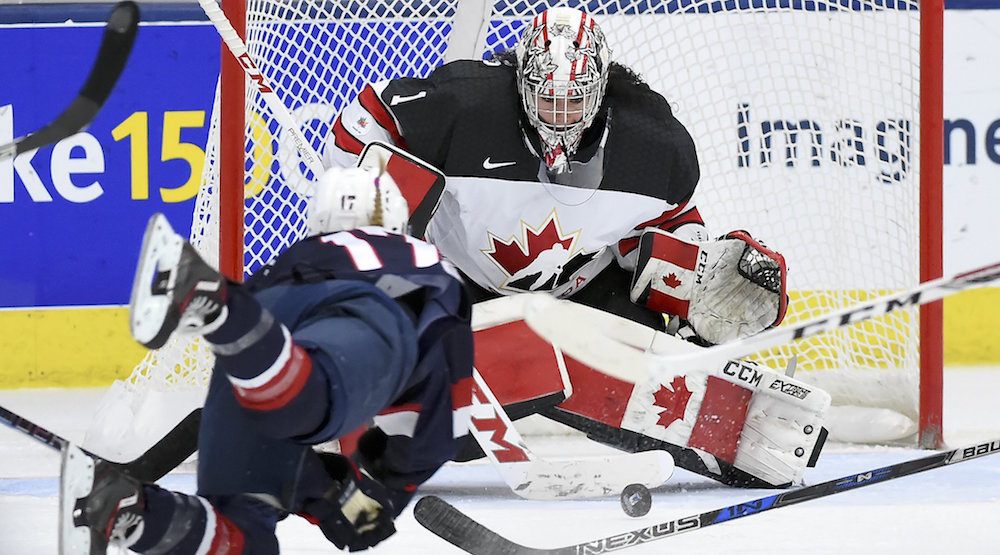 Heartbreak for Canada at the Women’s World Hockey Championship in Plymouth, Michigan on Friday, as a Hilary Knight goal in overtime gave USA a 3-2 win in the gold medal game.

Though Canada has dominated the Olympic tournament over the years, winning every gold medal since 2002, the Worlds have been a different story. USA has won seven of the last eight World Championships, including the last four in a row.

“This one hurts for sure, it’s tough but it’s motivation for us,” said Team Canada captain Marie-Philip Poulin.

Team USA nearly didn’t get to compete in this tournament at all, as their players took a stand, threatening to pull out of the tournament unless they were paid a fairer wage.

The Americans were full value for the gold medal, their first ever on home ice. They outshot Canada 40-30, and looked dangerous all night with their blazing speed.

“This definitely wasn’t the outcome we wanted, it was one great game and it could have gone either way at any moment,” said head coach Laura Schuler. “We definitely had our chances tonight and it’s important for us to hold our heads high.”

Canada got off to a great start in this one though. They grabbed an early 1-0 lead 1:01 into the first period when 2010 Olympics MVP Meghan Agosta buried a shot into the top corner on a 2-on-1.

Meghan Agosta gets Canada on the board first with this wicked shot #WomensWorlds pic.twitter.com/CspwcOEbRI

The Americans were undeterred, grabbing the momentum right back less than four minutes later when a Kacey Bellamy point shot through traffic deflected off a body in front to tie the game at one.

Another angle on the Bellamy goal. Goes in off Irwin #WomensWorlds pic.twitter.com/bqLbgFWXLD

Both teams hit iron late in the period, as the game remained deadlocked after 20 minutes.

The second period was Canada’s best, as they outshot USA 10-6, but both goalies kept all pucks out of their net.

Just 42 seconds into the third period, the Americans took the lead – and momentum – with Kacey Bellamy’s second goal of the game. Marie-Philip Poulin appeared to lose track of the puck and was caught looking the wrong way as the pass went in front of the net.

The speedy Americans took over the game for nearly half a period, outshooting Canada 11-1 in the period until a Canadian power play turned the momentum.

Poulin redeemed herself, taking the puck wide with a power move and sending a pass to Brianne Jenner who scored the tying goal, which was confirmed by video replay.

With the game tied at two after 60 minutes, this game was headed to overtime.

Canada overcame an overtime penalty, and pulled a puck off their goal line, but it only delayed the inevitable. The Americans took over, relentless with their pressure on the puck.

Canada looked rattled, giving the puck away with remarkable frequency, including on the final play.

A blocked Canadian point shot led to an odd-man rush that ended with Hilary Knight picking a corner for the dramatic overtime winner for USA.

Congrats to Hilary Knight and the #USWNT on winning the #2017WWC given all they've been through. What a game. #WomensWorlds pic.twitter.com/aKYm8YmRP1

This game and this tournament – Canada lost to USA and Finland during the round robin – proved that the Canadians have a lot of work to do if they want to repeat as Olympic champions in February.