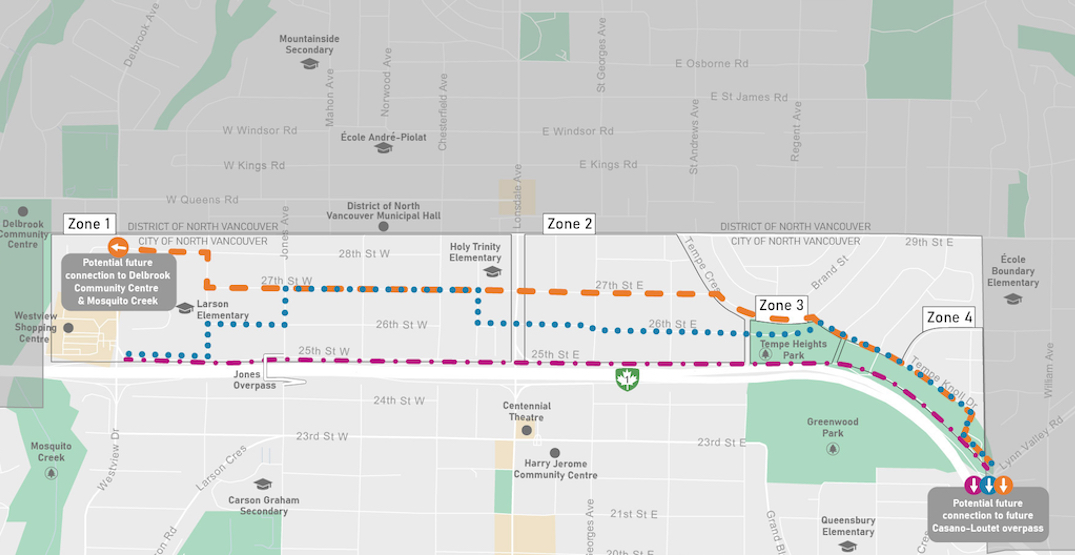 The City of North Vancouver is currently in the process of seeking public input on the preferred route for a new east-west greenway within Upper Lonsdale.

Three route options for Upper Levels Greenway have been identified.

From the eastern end of the planned greenway corridor, the orange route primarily runs along neighbourhood roads — on Tempe Knoll Drive and then mostly 27th Street.

The blue route also runs along a portion of Tempe Knoll Drive, but it transitions to a segment of 26th Street before returning to 27th Street. It then detours south along Jones Avenue and briefly returns to 26th Street before ending at the shopping centre. 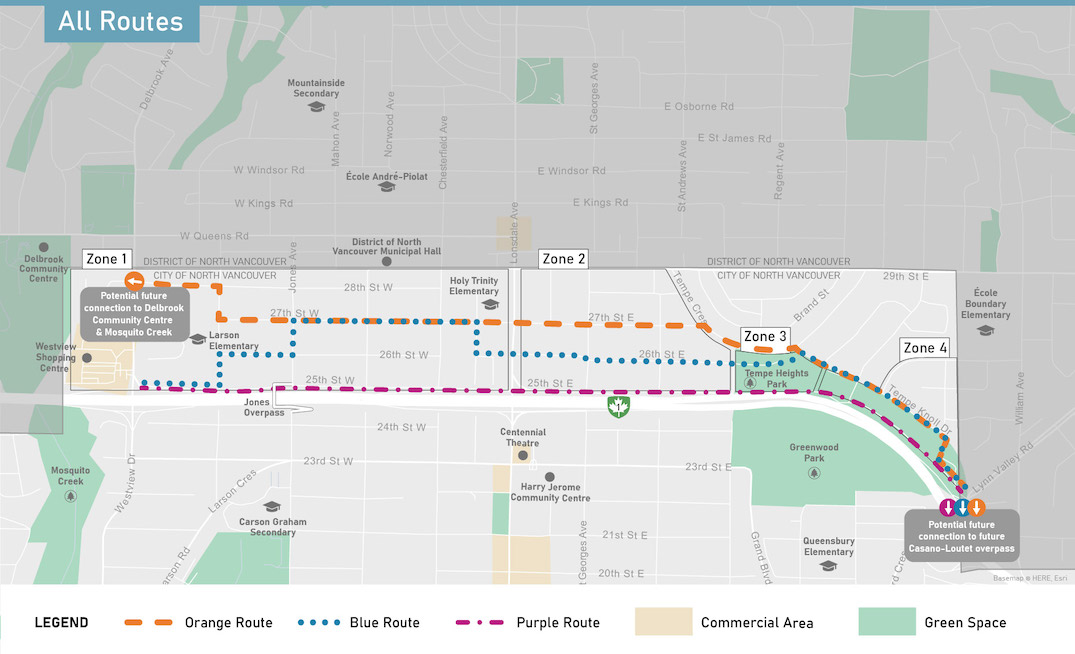 Three route options for Upper Levels Greenway. Click on the image for an enlarged version. (City of North Vancouver)

The purple route is the most direct route, following existing pathways within Tempe Heights Park before seamlessly transitioning to 25th Street for the remaining distance to the shopping centre.

While the purple route is most direct, it immediately parallels the highway, which means pedestrians and cyclists would have to tolerate higher levels of noise and air pollution compared to the other options.

The orange and purple routes are closer and more accessible to the two schools in the area, compared to the purple route.

However, according to the city’s analysis, the orange route has major topographical issues that would result in downhill speed challenges for cyclists, as well as vehicle traffic challenges on 27th Street. Both the blue and purple routes also face topographical challenges, but to a lesser extent. Shared multi-use pathways for both pedestrians and cyclists would be a challenge in some areas of the orange and blue routes.

Each route, as a result of context and condition, would have varying degrees of separation from other users, amounts of right-of-way to achieve the design and vehicle parking impacts, and accessibility for people of all ages and abilities.

For these reasons, with each route option presenting advantages and disadvantages, the municipal government currently does not have a single option that is strongly preferred over the others.

The project is expected to carry a construction cost of $6.7 million, covered by the city’s capital plan budget in 2023 and 2024.

An online survey for the current public consultation is available now through May 20, 2022. Public input will be used to identify the Upper Levels Greenway’s final preferred route and conceptual design in Summer 2022, with the detailed design presented in Fall 2022. There will be further rounds of public consultation in the forthcoming design process.