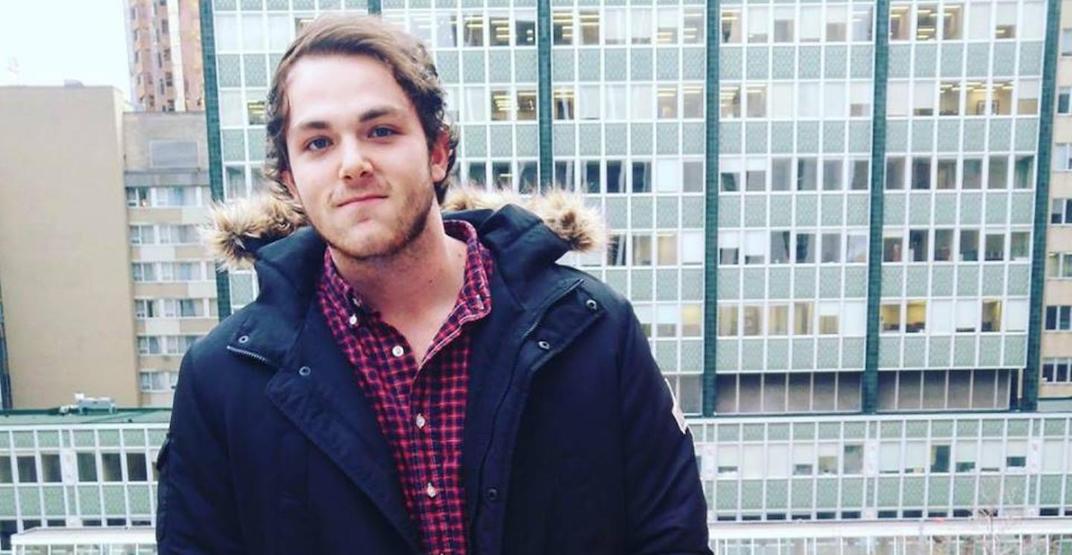 UPDATE: The University of Calgary has supplied a statement to Daily Hive explaining that Neurauter is not on campus this week, and that they are reviewing his situation. That statement has been added to the article below.

A man sentenced to three months in jail has been given leave to finish his semester before spending any time behind bars.

Connor Neurauter, a 21-year-old student at the University of Calgary, has been convicted of sexual interference of a 13-year-old girl. Following his guilty plea, Neurauter was sentenced to 90 days at the Kamloops Regional Correctional Centre, according to Kamloops This Week.

Neurauter met the 13-year-old girl in the summer of 2015 when he was 18, and reportedly had sexual contact with her, though never intercourse.

It was stated in court, according to Kamloops this Week, that Neurauter solicited nude photographs of the underaged girl, and used the threat of sharing them with her family as a way to ensure the girl kept their relationship a secret.

It was stated by the victim that Neurauter had at one point choked her, and that he had also received nude photos from her 14-year-old friend, in an attempt made by the teenagers to distract Neurauter away from the initial victim. He was arrested after the friend explained the situation to her mother.

In a January 8 article published by the Calgary Sun, the mother of the victim expressed her outrage at the postponement of Neurauter’s jail-time.

“Let’s postpone his jail sentence until May so he can finish his year of university. Nobody has stood up and said no, during the whole thing — there was not one time where the judge or even the Crown said ‘please, this is not right.’ The victims are the ones who have been paying over and over, every time we went to court,” she told the Calgary Sun.

It was also reported by Kamloops This Week that court dates in the past have been postponed to accommodate Neurauter’s schedule, as he was playing Junior A hockey at the time.

Word of the sentencing has made rounds on social media, and University of Calgary students are expressing their concerns at having a convicted sex offender return to their campus.

@UCalgary how come Connor Neurauter is still a student? Under what circumstances could he possibly still be eligible to study here? By not doing anything, you’re saying this is okay. This. Is. NOT. Okay. #zerotolerance #timesup #stepup

@UCalgary I don’t feel safe sharing the U of C campus with Connor Neurauter, a convicted sex offender. I see posters condemning sexual assault all over campus and yet this predator is still allowed to continue his studies which is incredibly disheartening to see. #timesup

Others have called out Neurauter’s own tweets for their misogynistic nature.

Connor Neurauter, what a gentleman (and sex offender). @UCalgary pic.twitter.com/kobeSppQoB

According to the University of Calgary’s Sexual Violence Policy, section 4.3 states that “The University’s policies, administrative processes and discipline systems are independent of the civil and criminal justice legal systems. University Community members alleged to have perpetrated Sexual Violence may be subject to the University’s administrative processes and discipline systems in addition to the civil or criminal legal system.”

The University of Calgary’s Student Union sent the following statement to Daily Hive via email:

“The Students’ Union supports and believes survivors of sexual violence. We also believe that students deserve to feel safe on campus. In light of this situation, we hope that those who feel like they need to talk to someone access some of the excellent support services we have here on campus: sexual violence support advocate Carla Bertsh, the Women’s Resource Centre, the SU Q Centre, or the SU Wellness Centre. Calgary Communities Against Sexual Abuse is also a good off-campus resource. We have been in touch with the University of Calgary regarding this situation and are waiting to see what action they take.”

The University of Calgary has stated that they are reviewing Neurauter’s situation, and that he is not on campus this week.

“We recently became aware that University of Calgary student Connor Neurauter was convicted in British Columbia and given a three-month sentence. The judge made the decision to allow him to complete his current semester at the University of Calgary, before beginning to serve his sentence in May,” they said in a statement sent to Daily Hive.

“The university is reviewing the situation. We can confirm that Mr. Neurauter is not on the university campus this week. We will provide further information when it is available.”

Neurauter’s court-ordered jail-time will begin in May of this year, and he was ordered to surrender a DNA sample to authorities and to register as a sex offender for ten years.