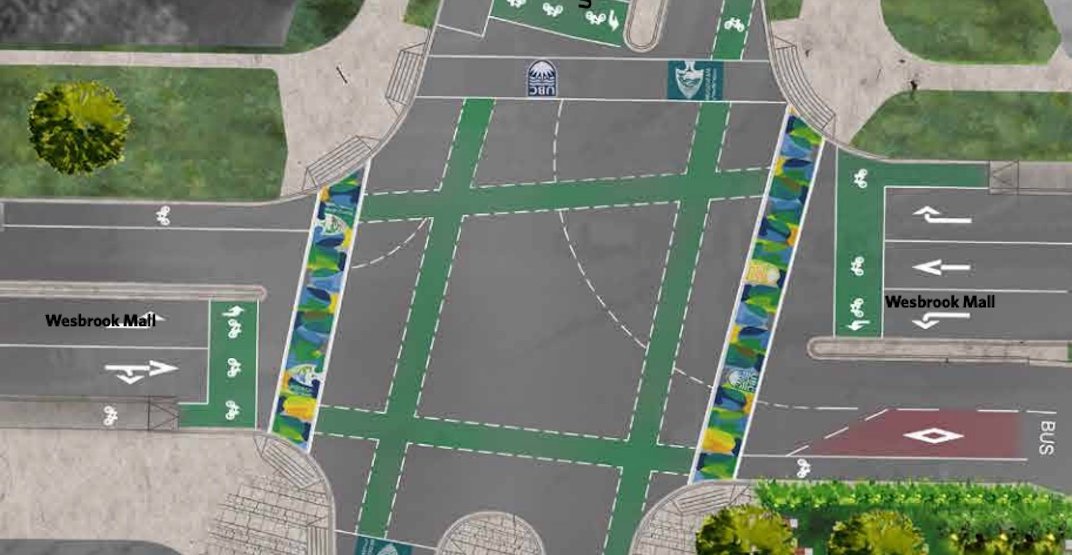 The two-km-long stretch of Wesbrook Mall between Chancellor Boulevard and West 16th Avenue at the University of British Columbia’s Point Grey campus is receiving a complete overhaul over the coming months.

Construction recently began on retrofitting Westbrook Mall with new designs and features that prioritizes the arterial street for pedestrians, cyclists, and buses, with the completion of the improvements coinciding with the launch of TransLink’s new 41st Avenue B-Line rapid bus service from UBC Bus Exchange to Joyce-Collingwood Station this fall.

This span of the street will be fully rebuilt, with the section between the UBC Bus Exchange and West 16th Avenue entailing a narrowed road width to create more room for sidewalks, landscaping, street furniture, and separated bike lanes.

There will also be bus-only lanes in each direction between University Boulevard and West 16th Avenue to increase the reliability of the new B-Line service and various other bus routes that use the roadway.

New and improved pedestrian crossings are planned along Wesbrook Mall, where it meets Student Union Boulevard, UBC Bus Exchange, UBC Hospital, Agronomy Road, and Thunderbird Boulevard. These areas see significant foot traffic, and pedestrian crossing distances and crosswalk waiting times will be reduced as a result of the changes.

But the most significant pedestrian crossing change will be the complete redesign of the major intersection of University Boulevard and Wesbrook Mall, which is currently severely dilapidated.

Current condition of the intersection of Wesbrook Mall and University Boulevard: 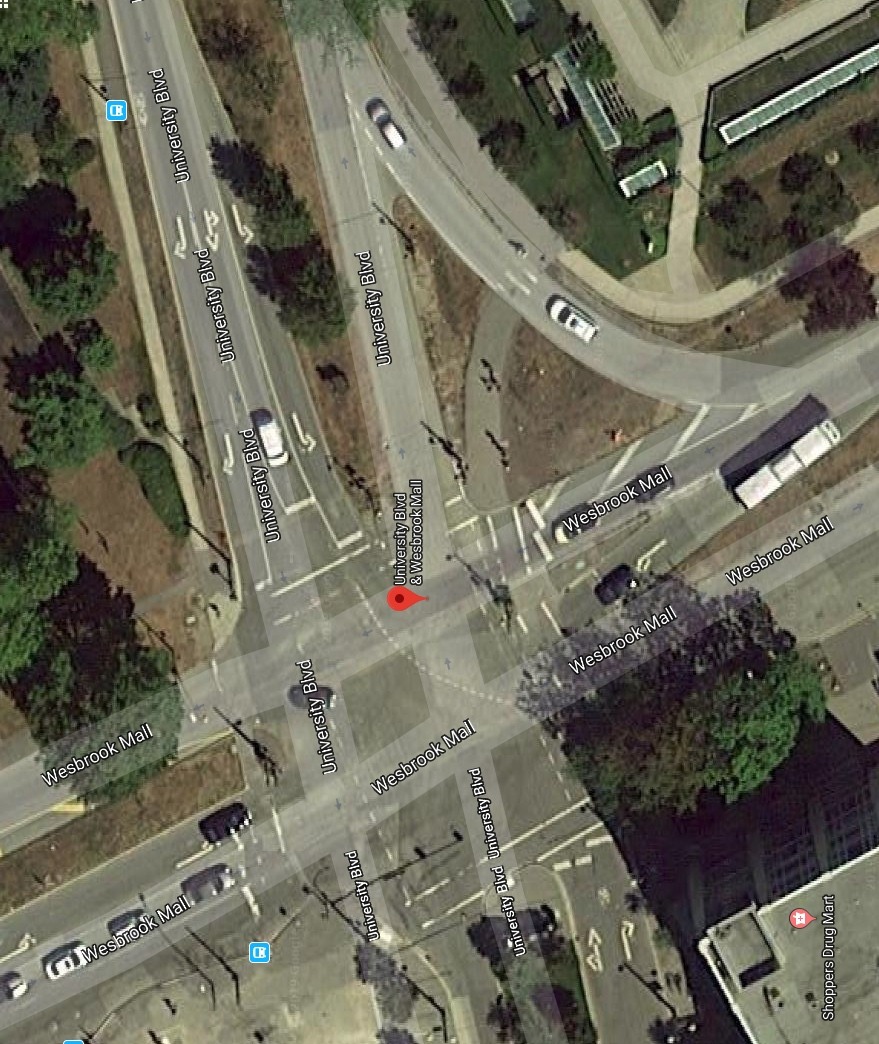 Future condition of the intersection of Wesbrook Mall and University Boulevard: 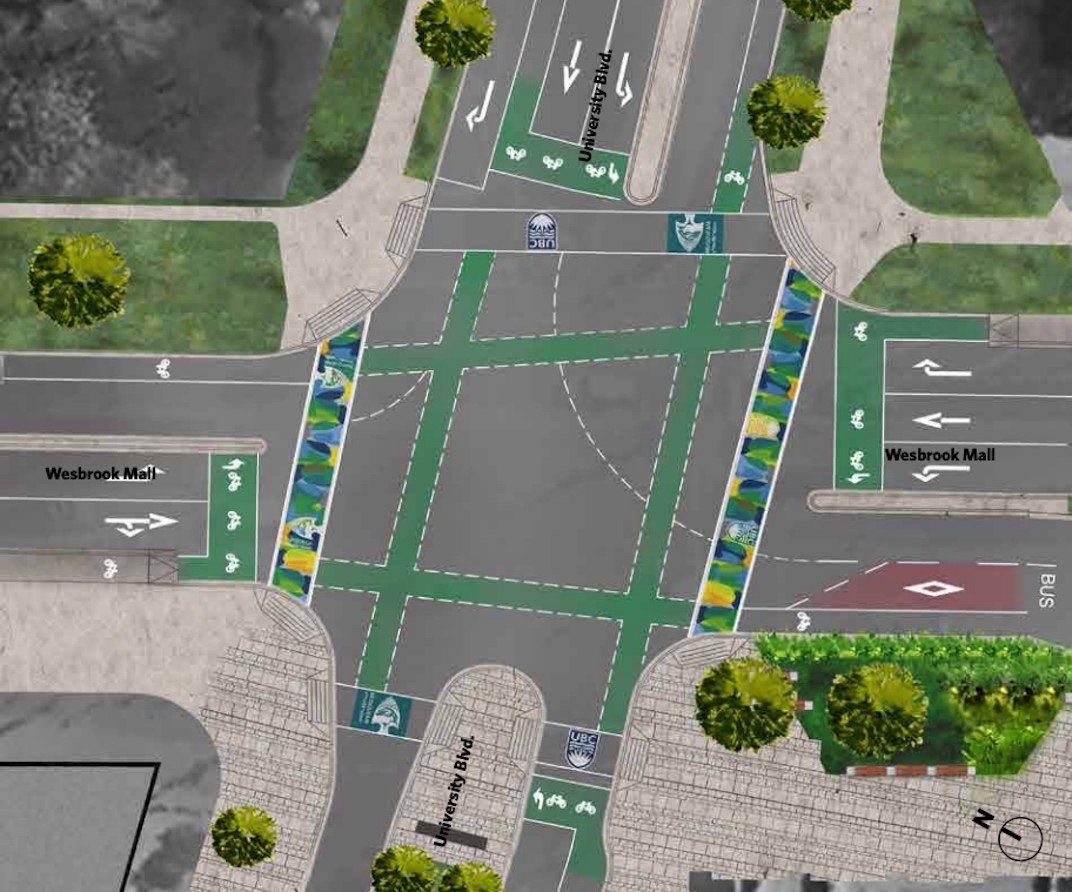 Redesign of the intersection of Wesbrook Mall and University Boulevard. (UBC)

The reimagined intersection will have a “feature crosswalk” with a design that has been designed collaboratively with UBC and the Musqueam First Nation to “create a sense of arrival at the main gateway to campus.”

As well, the University Boulevard median on the western side of this intersection will be extended to provide better photo opportunities with the giant ‘UBC’ sign monument.

Coinciding with the completion of Wesbrook Mall upgrades will be the opening of the new UBC Gage South Student Residence and bus layover facility on the former site of the diesel bus loop — the southwest corner of the intersection of Wesbrook Mall and Student Union Boulevard. 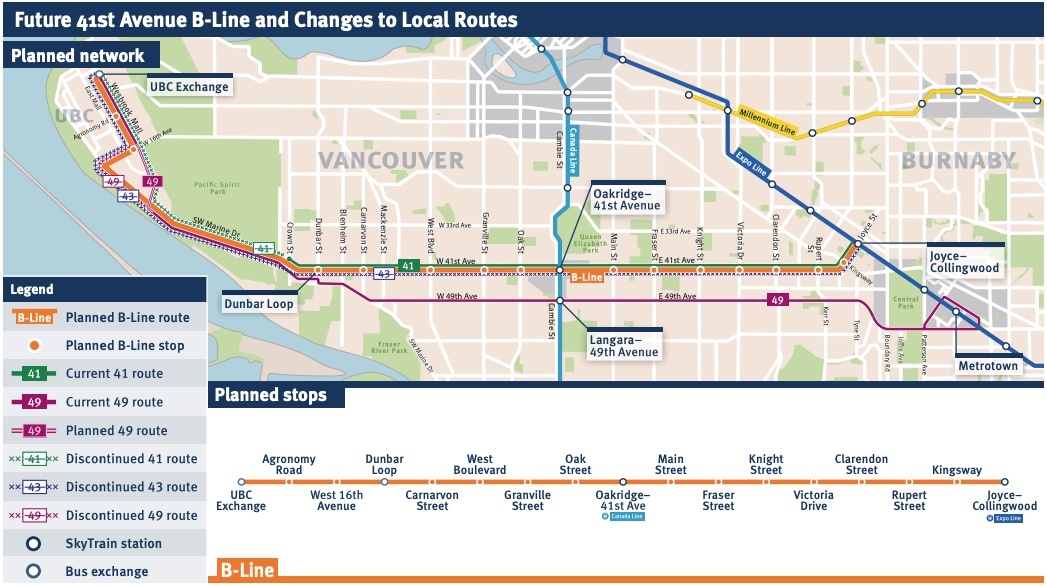 By the start of the 2019-2020 school year this coming fall, UBC will be served by a total of two B-Line routes, with the new 41st Avenue B-Line resulting in 33% more capacity compared to existing services and running every three to six minutes during peak hours, every eight minutes during the mid-day, evening, and weekend hours, and every 15 minutes late-night until 1 am.

With the assistance of street design changes such as bus-only lanes and queue jumpers, end-to-end travel times of between 45 and 60 minutes during the busy peak periods are projected.

There will be 50% less waiting compared to the existing No. 43 express bus route, which will be replaced by the B-Line.

The existing No. 41 route will also no longer reach the UBC campus, instead terminating at Crown Street, and switch from a diesel bus to a trolley bus.

Additionally, as a result of the changes to the No. 41, the No. 49 route will be rerouted through UBC Wesbrook Village to provide the new neighbourhood with continued local bus service.