The boys are back in town! After a four year absence from the road, U2 is set to launch their highly anticipated iNNOCENCE + eXPERIENCE tour this Thursday at Rogers Arena. The boys are playing Vancouver twice, and rumour has it the setlist between nights one and two will be drastically different.

Before the Irish rockers invade our city, we’ve compiled a list of five random facts about the band you might want to know before the show. Nothing important – just useless trivia to impress your friends or annoy your coworkers with. Ready?

1. They haven’t always been the biggest band in the world.

In 1981, U2 hit the road to promote their first album Boy, sometimes playing to venues with as few as five people in attendance. In March of that year, the band played Granville Street’s historic Commodore Ballroom to 800 fans, none of whom probably realized that the foursome would eventually return to fill stadiums. In fact, they had such few songs in their repertoire that they played their biggest hit “I Will Follow” twice. U2 is still the only band to perform at both the tiny Commodore Ballroom and gigantic BC Place; Ed Sheeran has done it as a solo act, playing the Commodore in 2012 and opening for Taylor Swift at BC Place the following year.

2. There’s an awesome little convenience store in Vancouver called Grocery U2 that, needless to say, has nothing to do with the band.

Earlier this week, I popped into Grocery U2 for a soda and had a brief chat with the patient lady working the register. I told her I loved the name of her business, to which she said, “Yeah U2… I think that’s a singer.” I confirmed her hunch and asked if the band had ever popped in for snacks, and she replied, “No no no… do you want a bag?” No word as to whether or not Bono and the boys had ever frequented the U2 Fruit Market in Burnaby – the store closed its doors a year ago. 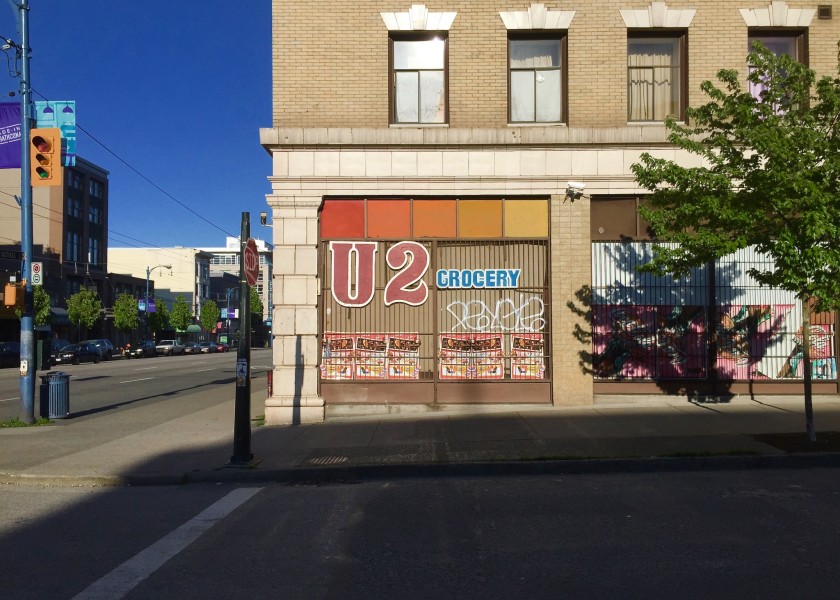 3. Tickets for both Vancouver dates are selling for hundreds of dollars online, but savvy Vancouver fans have been treated to weeks of rehearsals…for free!

In April, Vancity Buzz reported that U2 had rented the Pacific Coliseum to prepare for their 70-date tour. Since then, fans and curious onlookers have lingered around the venue in hopes of catching a sneak peek of what’s in store for opening night. And they haven’t been disappointed – low quality audio clips of the band rehearsing recorded from outside of the main entrance doors have already been uploaded to YouTube. One fansite has reported that the Grammy winners have run through as many as 43(!) songs to be evenly split between Thursday and Friday night. If the rumours are true, fans of the The Joshua Tree will be pleased while fans of Bono & The Edge’s Spider-Man: Turn Off The Dark will be crushed (just kidding – we all know there are no fans of that Spider-Man disaster).

4. Bono may be worth a reported $600 million, but dude is too cheap to hire a car service.

When U2 brought their 360 Tour to Vancouver in 2011, Bono and a friend were out for a walk when – surprise! – it began to rain. Instead of whipping out his company-issued iPhone to call an assistant, Bono stuck his thumb out to hitchhike. Eventually, the pair were rescued by a player for the Edmonton Oilers, his girlfriend and their German shepherd (you can’t make this stuff up). In lieu of a tip, Bono thanked the good samaritans with backstage passes to a concert in Edmonton and later told the crowd, “I like people who play ice hockey. They stop for hitchhikers. I know this from experience.”

5. Like it or not, Bono isn’t leaving your iPhone anytime soon.

In September of last year, U2 decided to release their latest album Songs of Innocence, completely free to iTunes’ estimated 500 million customers. What seemed like a generous offer at the time backfired almost immediately, with fans and critics taking to social media to trash the band for making the album a compulsory download. Apple eventually devised a tool to allow its users to eliminate the album from their computers, and Bono told Rolling Stone magazine, “If you don’t want it, delete it. Here’s the link.” But just when you thought you’d completely rid your iPhone of the enigmatic lead singer, take a look at the “Artists” tab in your music library. Does that silhouette look familiar to you? 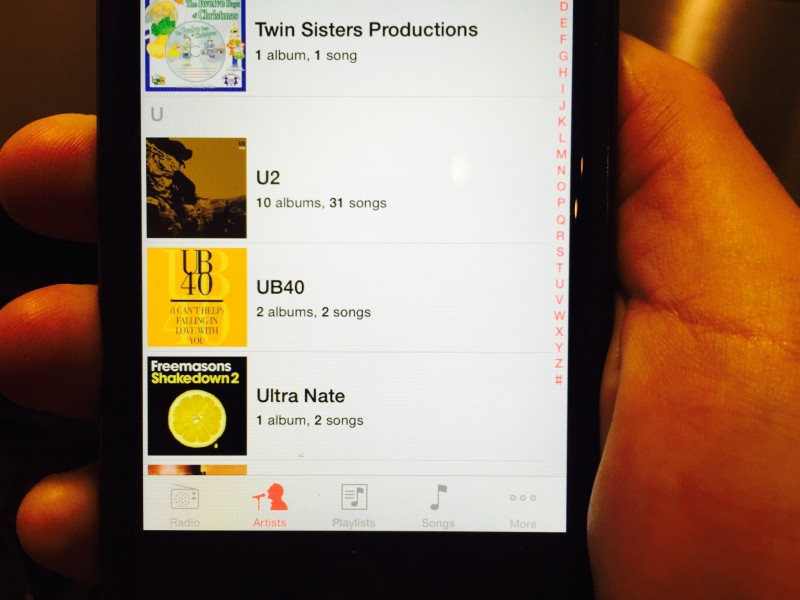 Tickets for both of U2’s Vancouver dates are sold out, but be sure to check Vancity Buzz on Friday and Saturday for our coverage of what’s sure to be an epic show. We’ll have exclusive photos of the band and details as to the big changes between nights one and two.