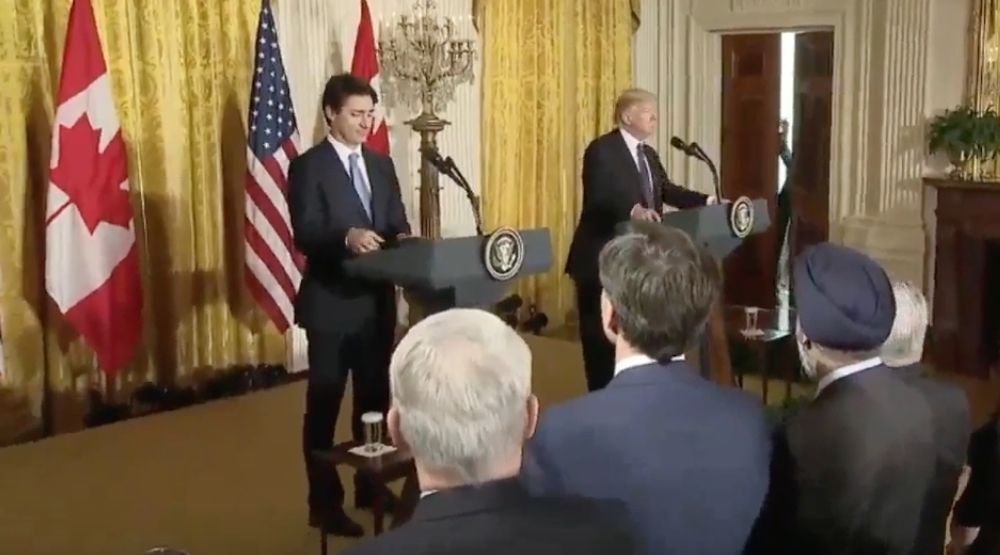 Trump and Trudeau paired together on matching podiums has got social media in a frenzy as the two world leaders wrapped up their joint press conference at the White House today.

While the differences are obvious, comments on the live-stream and subsequent activity on social media have zeroed in on Trudeau’s eloquent ability to slip in and out of French and English. Meanwhile, Trump has simultaneously been slammed for barely making sense in his native tongue.

Neither Trump nor any of his aides in the front row are wearing earpieces to listen to Trudeau’s comments in French https://t.co/HMNfWzvTwh

I can understand more of Trudeau ‘s French answers with high school level fluency than I do trumps English rambling. #TrudeauMeetsTrump

Trudeau speaking French through half the press conference has to make Trump ready to build northern wall.

I liked it just now when Trudeau said “Trump” in French and Trump looked over like a dog that understands its name and nothing else.

I liked how uneasy Trump looked whenever Justin spoke French, like he suspected he was being mocked, then reacted at the sound of his name.

Surprised that Trump didn’t tell Trudeau to “go back where he came from” and “this is America, speak English” when Trudeau spoke French

Donald Trump makes Justin Trudeau feel at home by sending him a message in French…. pic.twitter.com/aoS2efChPD

#TrudeauMeetsTrump is such a TEASE.We could also have a beautiful, sane leader. SAVE US PM TRUDEAU!We’ll even learn French #resist#Trudeau

Trudeau spoke French for a good amount of the press conference…or as Trump calls it…”funny talk”.

@cnni@CNN Trudeau can do it in French and in English. Trump can barely do it in English. What an embarrassment

Drumpf is clueless what Trudeau says when he speaks in French. To be fair, Americans have no idea either what DT is saying in English.

Sending Trudeau to stand attractively next to Trump while speaking French is actually the closest thing Canada has to saying “fuck you.”

Trump to himself while Trudeau addresses him in French: I have the BEST words and they’re all in English. Fuck him. pic.twitter.com/DQarrksJMc