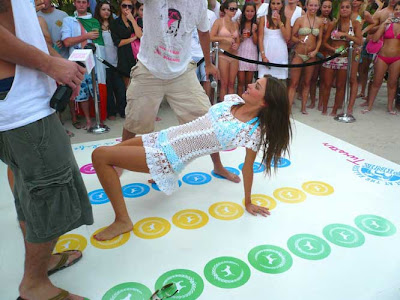 September marks Vancouver Improv Anywhere one-year anniversary and to celebrate, they have a very special event that’s been in the works for months! They have just received the “green light” from the Guinness World Records™ (Claim ID# 295961) to attempt to break the record for “Most participants in a game of Twister” This September 12th at UBC! Fellas, think about it, twister, women, I’ll let your mind take it from there.
The current record of participants in a game of Twister is 4,160 people at the University of Massachusetts at Amherst set on May 2nd, 1987. The record will be attempted at UBC in Vancouver on September 12th, 2010.
It is also our intention to use this opportunity and raise money for BC Cancer Research. We need a minimum confirmation of 4,200 people! Participants unable to confirm via Facebook can also email: [email protected]

What: 2010 Twister World Record Venture!
DATE: Sunday, September 12th, 2010 – 2:00PM (arrive EARLY!)LOCATION: MacInnes Field at UBC (by the bus loop)
COST: Free. However, it is our intention to raise money for BC Cancer Research. All 1,150 generously discounted Twister mats flown in from Hong Kong will be available at a minimum donation of $10