Approximately 200 retailers will occupy the space inside the massive Tsawwassen Mills indoor shopping centre next to B.C. Ferries’ Tsawwassen terminal.

Ahead of the scheduled grand opening on October 5, 2016, mall developer Ivanhoe Cambridge has announced the first 27 retailers that have decided to set-up a presence inside the 1.2-million-square-foot complex.

More retailers will be announced in the months to come before the shopping centre’s opening, according to a news release. Ivanhoe Cambridge owns and operates Metropolis at Metrotown, Oakridge Centre, Richmond Centre, Guildford Town Centre, and Victoria’s Mayfair Shopping Centre.

When complete, the mall is expected to tap into the Vancouver Island market through the adjacent ferry services, Vancouver, Richmond, other south of Fraser communities, and even visitors from Washington State.

The Tsawwassen shopping centre could even provide McArthur Glen Vancouver Airport Outlet Mall with some competition given its scale and duplication of brands already found at the Vancouver International Airport location. This includes Nike and Calvin Klein outlet stores, which regularly see large crowds and even lines outside the store.

But there are plans to double the size of Vancouver Airport Outlet in the short-term. A large vacant greenfield site immediately adjacent to the Arthur Laing Bridge could add another 140,000 square feet of space for about 50 stores.

Tsawwassen Mills is located at Highway 17 and 52nd Street. A 550,000-square-foot outdoor strip mall dubbed Tsawwassen Commons next to the indoor mall will feature 100 tenants, including anchor tenants Walmart, Canadian Tire, and Rona. It is also expected to open this fall.

Both Tsawwassen shopping centres are projects in partnership with the Tsawassen First Nation on lands granted to the band by a 2007 treaty. 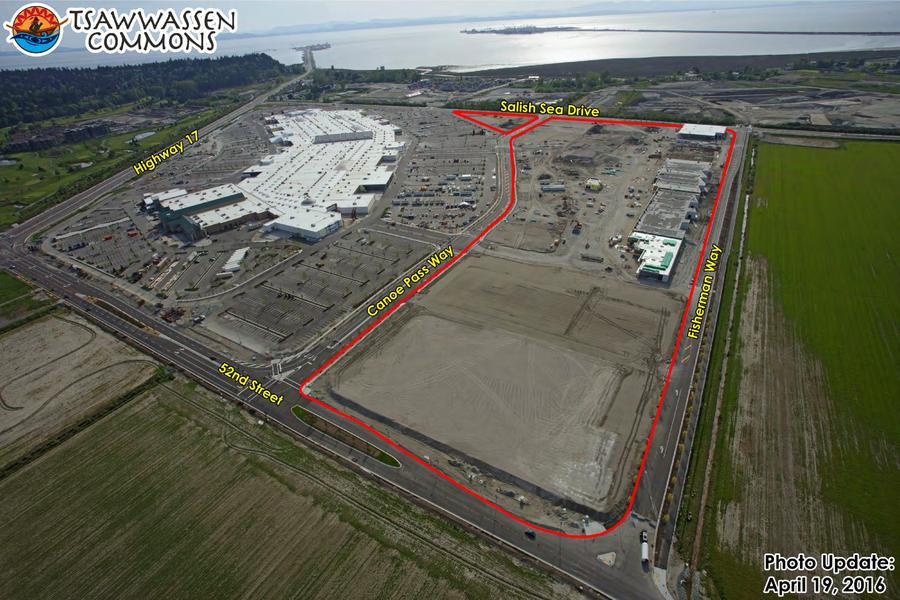