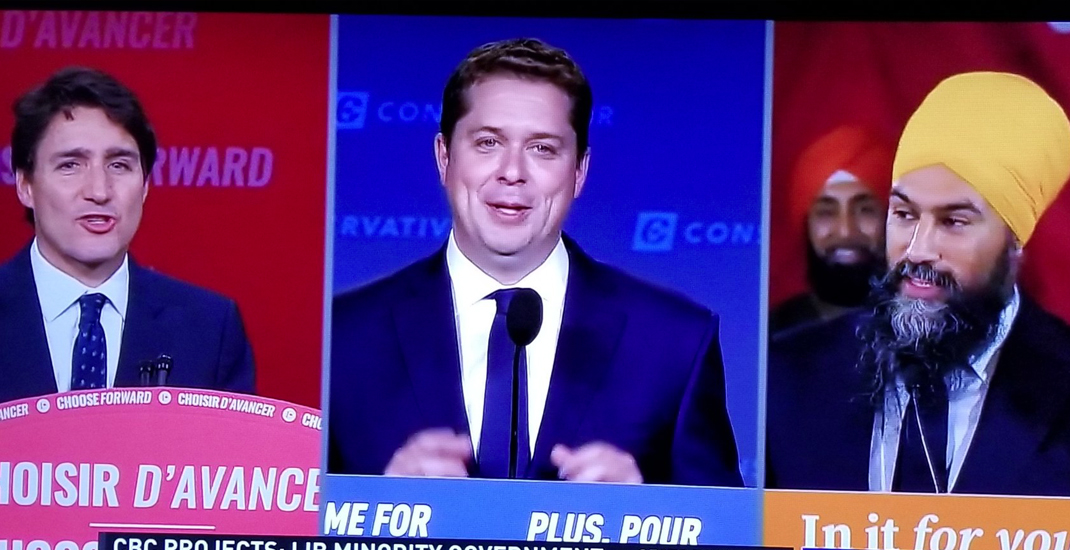 If this is what a coordinated effort between minority parties look like, the coming years don’t look promising.

On stage in their respective ridings, the three party leaders were set to give their post-election speeches. Except none of their camps coordinated with each other to figure out the speaking order.

Jagmeet Singh began in Burnaby South. Then before he was finished, Andrew Scheer appeared in Regina-Qu’Appelle and began. Then, almost immediately, Justin Trudeau went on stage in Papineau.

It was a gong show for broadcast media. And we all noticed.

Note: it’s customary for the winner to go last.

I’ve never seen anything like this…Trudeau, Scheer and Singh are all giving their speeches at the same time?!

Not exactly the collaboration I had in mind… 🤔 #elxn43 #cdnpoli pic.twitter.com/scxLZumlBm

All three leaders talking over each other in their speeches tonight. This goes against convention where the prime minister speaks last. pic.twitter.com/cRBCXXaaib

People voted for their leaders to work together and they can’t even let each other give their speeches. This Parliament is going to be something. pic.twitter.com/goD6He4dJA

Off to a good start! All three leaders are giving speeches at the same time! #exln43 pic.twitter.com/gh5MG8k4z3

The best part of the election results so far has been watching CBC try to manage the 3 speeches that were happening at the same time pic.twitter.com/JAJoXjNQVi

They can’t even coordinate their election night speeches. https://t.co/x4i8g2YqHY

Twitter is going nuts over the fact the three leader speeches overlapped. Singh’s felt like it was going long, then Scheer started his speech, then Trudeau took the stage. #nodecorum #traditionbedamned #exln43 pic.twitter.com/qIJICBKrJW

just gonna have all the speeches at once, eh? pic.twitter.com/Hq9bBWVRHI

To be fair, Scheer, Trudeau and Jagmeet Singh are speaking simultaneously. CBC just put up a split screen of all three speeches still underway. A troubling omen of cooperation to come in a minority government, or just a little timing glitch?