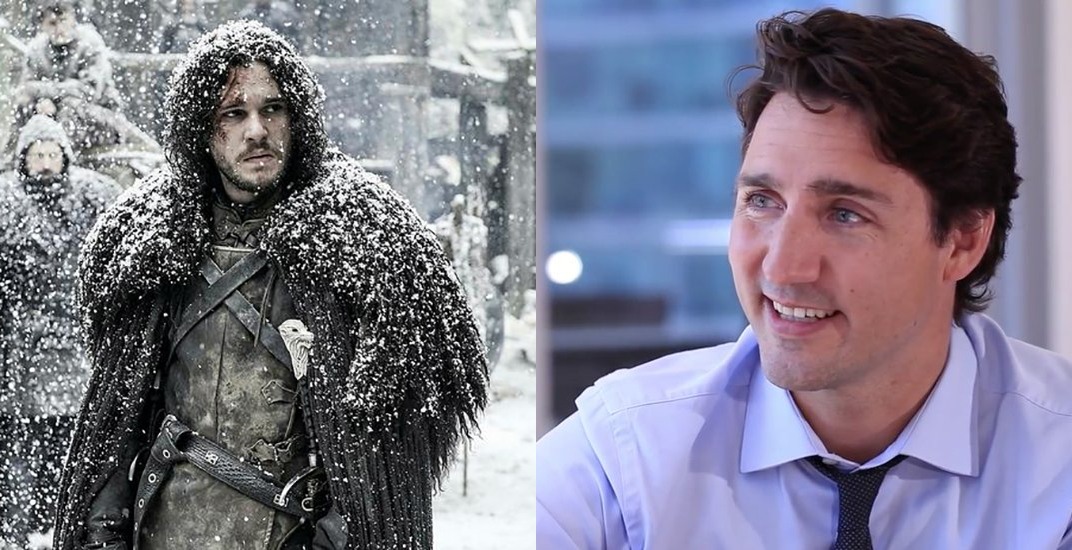 Justin Trudeau and Game of Thrones are actually affecting where people want to emigrate, according to a new report by UK relocations specialists MoveHub.

“Trudeau has been a hit worldwide,” reads the report, which describes Canada as one of the “countries that got their PR right.”

What’s more, the firm found Canada is now the 5th most popular destination for immigrants, behind the UK, Australia, the US, and Spain.

Meanwhile, the UK is the top country people are leaving, the firm found, followed by France, the US, Australia, and Germany.

Canada is only the 7th place most departed country in the world, so it seems Canadians love where they live right now. We know we do.

The firm analyzed more than 350,000 moving inquiries between April 2016 and April 2017, to find out how social media trends impacted immigration in the past year.

It also surveyed 2,000 people through Vivatic to find out how they felt about moving overseas.

According to MoveHub, Trudeau’s welcoming of immigrants from Syria and approach to gender equality has boosted Canada’s overseas profile.

“The ‘Trudeau Effect’, as it was dubbed, caused a flurry of enquiries for moving there, with notable spikes coming every time Trudeau trended on Twitter or had a positive high profile media engagement,” said a release.

“The ‘Trudeau Effect’ caused millennials from all over the world to look to Canada for a more liberal political stance in the face of the growing pockets of right-wing populism throughout the West,” reads the report.

Unsurprisingly given Trump’s election in the US, Movehub found moves to the United States are already down 10% since last year.

The firm also found more than a quarter of respondents to their survey said Trump’s presidency had put them off ever moving to the US.

In news that will surprise no Game of Thrones fans, MoveHub found the show’s ratings matched inquiries about Iceland, where much if it is filmed.

According to the report, in the same week GoT’s highest-rated ep Battle of the Bastards dropped, searches for “Iceland” rose 82% compared with the previous month.

Searches for “Icelandic life” also peaked during this period – around May and June 2016 – suggesting a serious influence on relocations ideas.

“These statistics show just how influential popular culture can be on international relocation trends,” reads the report.

In a release, Ben Tyrrell, head of MoveHub, said the reasons people move overseas are changing.

“Our research shows that people’s motivations for moving abroad are no longer based on months of research,” he said. “Many seem to be following viral social trends about a specific
culture or custom.”

Overall, researchers found 88% of respondents thought it was beneficial to have lived in another country, with 75% saying it gave them a fresh perspective on life.

In the report, Tyrrell said 2016 proved to be one of the most popular years for international moves.

“Despite the turbulent political landscape attitudes towards living abroad have never been more positive,” said Tyrrell.

“It seems people still believe that moving to a new destination promises them invaluable life experiences, better career opportunities and the chance to immerse themselves in a new culture.”