Not everyone may support Justin Trudeau, but those who do apparently do so with gusto.

A recent study from the Angus Reid Institute found that Prime Minister Trudeau may have a stronger hold over his core supporters than his opposition, CPC’s Andrew Scheer and the NDP’s Jagmeet Singh, have in their own parties.

That’s not to say that Trudeau came out on top overall, as it was actually Scheer who saw the most support from the 1,500 Canadian adults who completed the online survey between October 3 and 8. 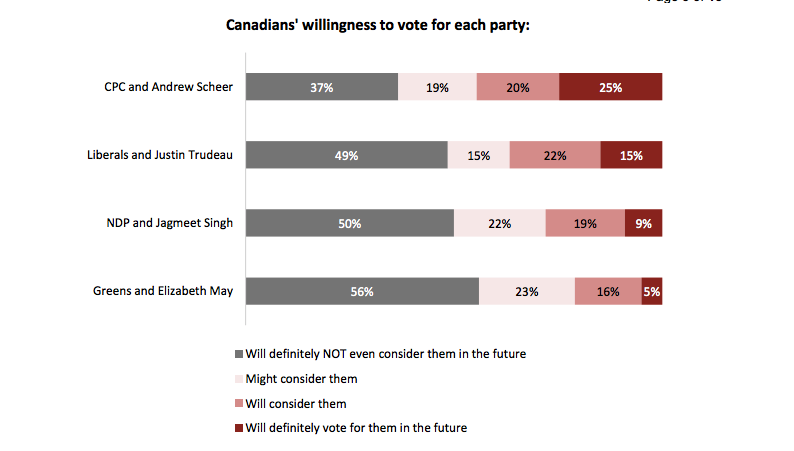 Canada’s willingness to vote for each party (Angus Reid Institute)

However, of the supporters for each party, it was found that those in the Liberal base had the strongest support and trust in their designated leader when compared to the other two party bases.

Looking ahead at the next federal election, both Liberal (61%) and CPC (60%) potential voters stated that they see their party leader winning more seats when all the votes are counted in 2019.

Singh’s supporters were a bit more skeptical about the party’s leadership, with only 34% thinking that Singh would be capable of the same.

Trudeau may also be getting the edge by simply having been in the public eye for longer, as 30% of Scheer’s potential voters stated that “they don’t know enough about him to describe him,” according to the study, and a full 46% of potential NDP voters saying the same of Singh.

Those who did state descriptions of their party’s leaders saw Trudeau as charismatic, compassionate, and down to earth when told to choose up to five adjectives from a list of 20 or to choose their own.