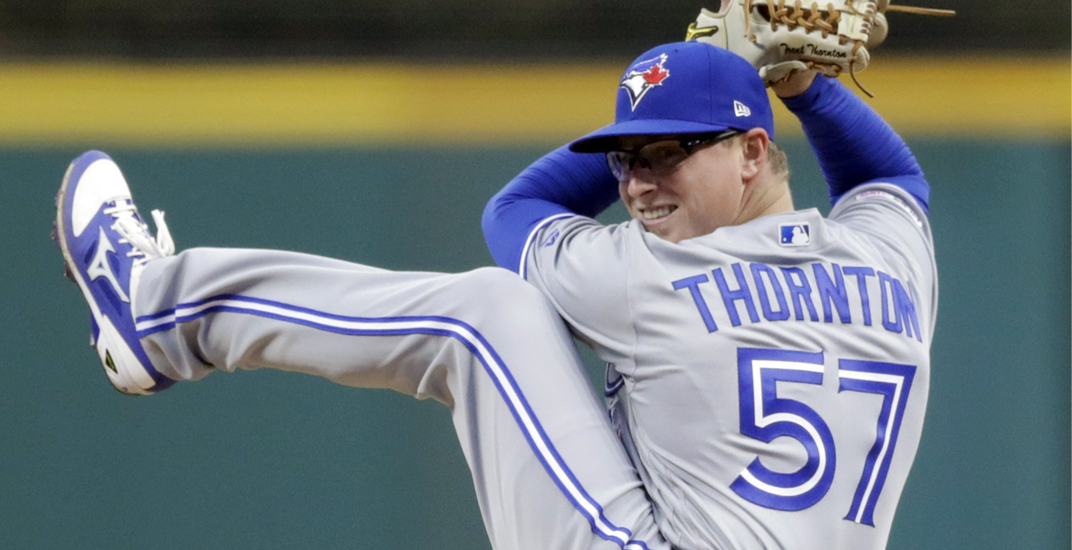 As a team who used 21 different starting pitchers throughout the season, Thornton was the sole Blue Jays pitcher who stayed in the rotation from start to finish in 2019. His 29 starts and 149 strikeouts were the most by any Blue Jays pitcher.

Thornton was the one constant for a Blue Jays starting rotation that was in constant flux throughout the 2019 campaign. Due to the drastic overhaul of Toronto’s starting rotation, Thornton battles once again for a coveted role on the team’s pitching staff.

“There’s no hostility between anybody competing for a job,” Thornton told reporters at Winter Fest. “At the end of the day, you do have to look out for yourself. It’s good for the team and it’s good for you as an individual. You have to go out and prove yourself day-in and day-out.”

The Blue Jays’ front office fulfilled their promise to improve their starting pitching by acquiring Chase Anderson and signing Tanner Roark and Hyun-Jin Ryu. With those moves, the Blue Jays filled three-fifths of their starting rotation for Opening Day.

The domino effect of those transactions bumped pitchers like Thornton further down the Blue Jays depth chart. These pitchers are now competing for an Opening Day roster spot heading into the 2020 season.

Speaking of Ryu, Thornton and his Blue Jays teammates were elated to learn the Blue Jays signed the 2019 NL Cy Young runner-up to a four-year contract. Who broke the exciting news of the signing to Thornton? A little blue bird.

“I saw it on Twitter,” Thornton said. “Most of the stuff that goes on in the baseball world I find out on Twitter.

Thornton noted that the rigours of his first full season in the major leagues took a toll on his body, but he remarked he didn’t rest very long the year prior. Before being acquired by the Blue Jays in November 2018, Thornton was coming off a heavy workload as a member of the Houston Astros organization.

Despite pitching north of 150 innings in 2019 and making 29 starts with the Blue Jays in 2019, the sophomore starter said he’s well-rested this offseason.

“This offseason, I’ve gotten the proper rest and my body feels significantly better,” Thornton said. “I feel the strongest I’ve ever felt. I’ve been working out extremely hard and carrying that little chip on my shoulder going into spring training.”

One of Thornton’s goals for the 2020 season is to contribute more innings out of the starting rotation and pitch deeper into ball games. He started his 2019 campaign strong by tossing five or more innings in five of his first seven starts, but as the season dragged on, his innings-per-start dwindled.

By season’s end, Thornton averaged 4.8 innings per start. By being more efficient with his pitches in 2020, he hopes to bump that innings-per-start number even higher.

There were three instances in September 2019 when Thornton didn’t get the ball as a starter. Instead, Blue Jays manager Charlie Montoyo opted to use an opener ahead of Thornton. In those three games, Montoyo’s strategy paid off as Thornton posted a 3.00 ERA with 14 strikeouts and only two walks as a “bulk pitcher”.

Since the Blue Jays loaded up on starting pitchers this offseason, the team’s starting pitching depth stacks up over ten starters deep. Thornton finds himself among the mid-tier of those arms, and if Montoyo is adamant on working Thorton onto the 26-man roster, there’s a chance he may have to go to the bullpen.

It’s a role that Thornton’s familiar with, as he pitched out of the bullpen in collegiate baseball and the minor leagues. But in a perfect world, he prefers to take the ball every fifth day as a starter.

“I’d obviously love to be a starter,” Thornton said. “It’s what I’ve done for the majority of my career. I’ve come out of the pen in college and in pro ball, whether it’s a bulk guy, a one inning guy, or closing. It’s not like I’ve never been there and put in that situation before.”

Given Thornton’s repertoire of two plus pitches with his fastball and curveball, there was some consideration towards having him pitch out of the Blue Jays’ bullpen to begin the season in 2019.

Winter is high season for pitchers to tinker with pitches or to add a brand new pitch to their repertoire. Thornton already had a head start on his offseason project, as he was experimenting with introducing a changeup into his pitch mix.

“I’ve been trying to work my craft of my changeup,” Thornton said. “I started getting a pretty good feel for it at the end of the season and that’s one thing I really confident with this offseason going into spring training. I’ve always felt comfortable spinning the ball, whether it’s curveball or slider, fastball or cutter.”

Spinning the ball is one of Thornton’s key strengths as his fastball and curveball ranked in the top 12 percent of all Major League pitchers in 2019.

The 26-year-old has an uphill battle to break camp as a member of the Blue Jays starting rotation for the second consecutive year, but as with spring training in 2019, all it takes is an injury to another player to present an opportunity for a starter like Thornton.

If that opportunity arises in 2020 with the Blue Jays, he’s ready to make the most of it.