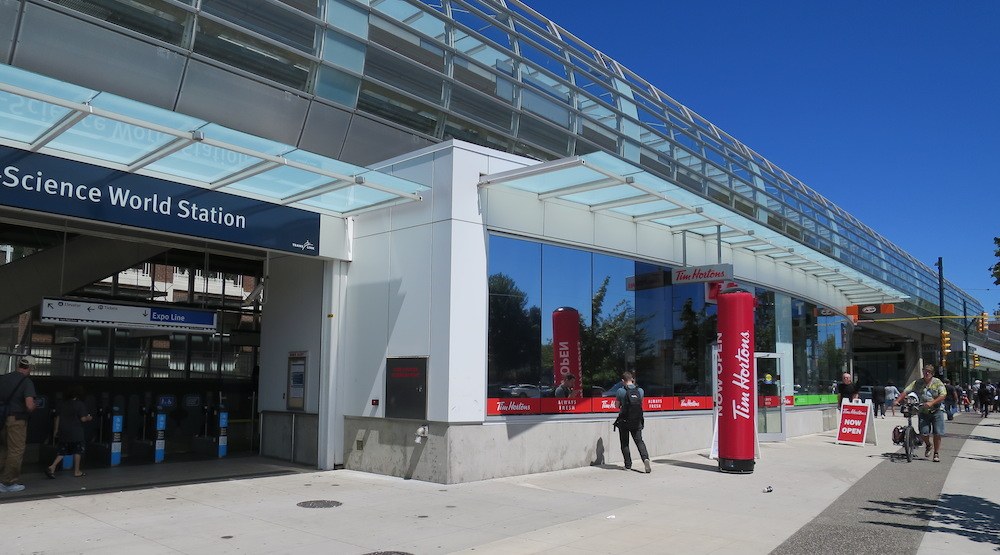 As part of a major push to diversify and increase its revenue sources to help fund ambitious transit expansion plans, TransLink has announced plans to significantly expand its retail spaces across its network of train stations.

The public transit authority says it currently owns and manages over 10,000 ft² of retail space, which generates approximately $500,000 annually and helps off-set costs for transit users and taxpayers.

It plans to grow this to about 17,000 ft² by 2022, and this will increase its retail lease revenues to close to $1 million per year, according to a release.

All of this is being accomplished through TransLink’s $164 million station renovation project, which is largely funded by the federal and provincial governments.

Two new retail spaces on the west entrance of the station now feature A&W and Tim Hortons while a new unit on the east entrance is home to Starbucks, which was previously located in a space on the west side of the street prior to the renovations.

A new retail space at the high-profile street corner of Joyce Street and Vanness Avenue will also be incorporated into the ongoing renovations of Joyce-Collingwood Station.

Depending on location, daily ridership at SkyTrain stations vary between approximately 5,000 and 100,000 passengers.

But not all businesses within SkyTrain property are a success, and some retail units at stations with less foot traffic have remained vacant for years. This is particularly the case if the retail units are located inside the fare gate zone, which is the case for most of the stations.

For instance, the Dunsmuir entrance into Granville Station once had a Starbucks and a convenience store in retail spaces operated and owned by The Hudson. But both businesses closed due to low traffic and visibility.

And only a handful of the Jugo Juice locations that opened inside the underground stations of the Canada Line as part of a multi-station lease deal have survived. The smoothie bar chain previously had a presence inside King Edward Station and Oakridge-41st Avenue Station, but those locations have since closed and only the Vancouver City Centre Station and Broadway-City Hall Station spots remain open.

In fact, the failure of the two locations resulted in two lawsuits by the franchisees against Jugo Juice for allegedly providing them with incorrect information, including allegedly informing them that the retail units would be located outside of the fare-paid zone.

A retail unit hidden away in a corner at the Olympic Village Station’s mezzanine level remains unleased because of its poor position.

TransLink’s station design principles have changed immensely ever since the region’s first SkyTrain stations were constructed more than three decades ago.

Modern designs now revolve around the tenets of Crime Prevention Through Environment (CPTED), which prescribes improved lighting and the usage of glass walls instead of metal mesh to increase visibility, glass door and walled elevators, and station interiors with no blind corners.

One major CPTED tenet is to increase “eyes on the street” to achieve safety, and this can be provided through the opening of new retail spaces.