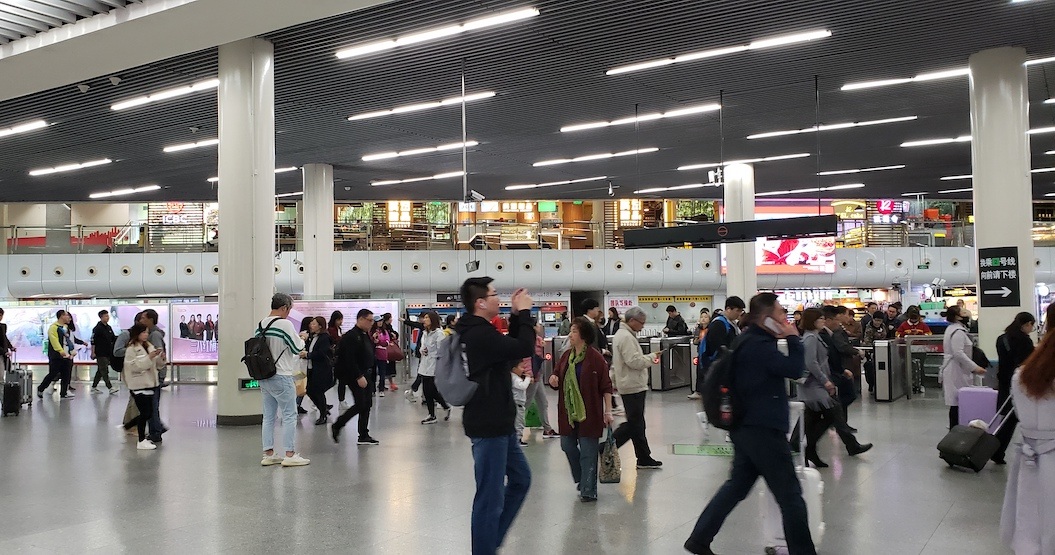 Retail along the perimeter of a concourse inside a major subway interchange station in Shanghai. (Kenneth Chan / Daily Hive)

Metro Vancouver’s public transit authority is in the process of refreshing its retail spaces found at SkyTrain stations.

TransLink says improvements are being made at some vacant units, and it is taking the opportunity to add new retail spaces through station renovation projects.

In an email, TransLink spokesperson Jill Drews said the spaces in the older stations are currently not suitable for the type of tenants they hope to attract, as these spaces were designed for smaller corner store-style businesses.

“These shops once populated the system but have dropped away due to legal requirements prohibiting sales of tobacco on provincial property,” she said.

“We are renovating some older locations to suit the needs of a wider range of potential tenants. This includes improving electrical and plumbing to accommodate food service retailers.”

However, some of the newer retail spaces have also suffered from prolonged vacancies, with businesses struggling to survive — particularly retail spaces within Canada Line stations.

Most recently, the INS Market convenience store tucked away inside the fare paid zone of Yaletown-Roundhouse Station was forcibly shuttered in early-March — after less than a year of business and just a few weeks after escalator construction began in front of the store’s entrance. Legal letters posted on the window of the closed store stated the franchisees missed two consecutive monthly rent payments.

Just half of the Jugo Juice locations that opened inside the underground stations of the Canada Line as part of a multi-station lease deal have survived. Earlier in the decade, franchisees behind the failed juice outlet locations even resorted to legal action against Jugo Juice for allegedly promising retail spaces outside of the fare paid zone, amongst a number of complaints brought to court.

A retail unit hidden away in a corner at the Olympic Village Station’s mezzanine level, beyond the fare paid zone, remains unleased because of its extremely poor visibility.

Some of SkyTrain’s most successful retail spaces have been units located outside of the fare paid zone. For instance, the new Starbucks, Tim Hortons, and A&W are thriving within the street front units of the upgraded Main Street-Science World Station.

In 2017, coinciding with the completion of the renovations to Main Street-Science World Station, TransLink stated at the time that it managed over 10,000-sq-ft of combined retail space, generating about $500,000 annually.

On many subway systems in Asia, retail spaces are well-supported by the sheer number of passenger foot traffic volumes that flow through stations. But even with the ridership, retail spaces in Hong Kong, Singapore, and Shanghai are generally located within highly visible and found outside of the fare paid zones — in areas such as the perimeter of the concourses, just outside the fare gates.

Despite the relatively limited scale of SkyTrain’s retail program, especially when compared against Asian systems, the revenue generated from businesses has created a growing source of supplementary revenue to help cover operational costs.

Revenue from retail leasing grew sharply to $800,000 annually in 2018, and this figure is expected to climb to $1 million in 2022 when the public transit authority’s combined retail area grows to 17,000-sq-ft.

Drews notes that placing retail at SkyTrain stations not only provides added convenience for passengers, as they no longer need to veer from their usual route, but it also gives the system more eyeballs, which effectively creates a greater sense of security.