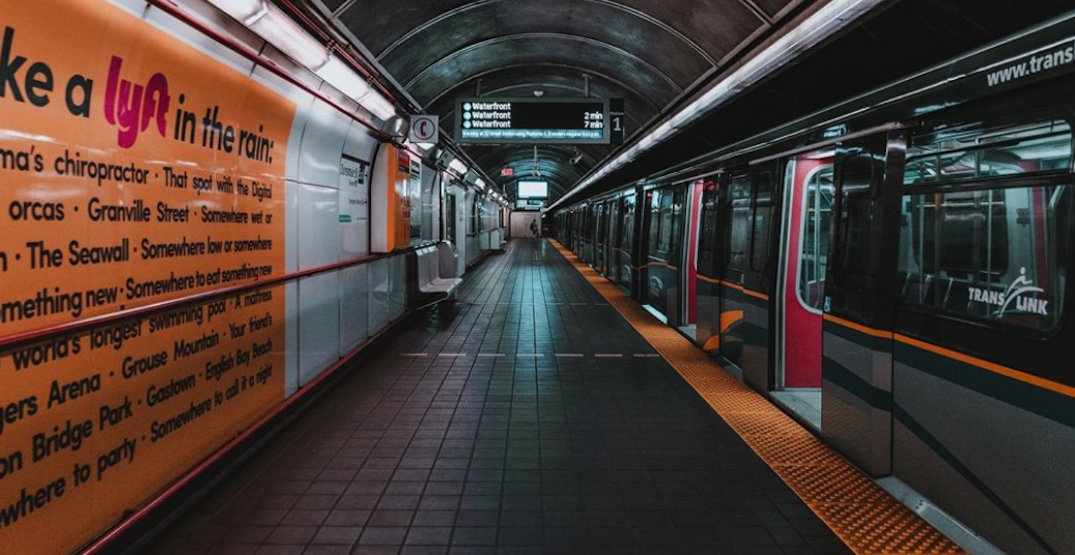 Metro Vancouver’s public transit authority has provided a more detailed breakdown of how its ridership has changed as a result of COVID-19.

A similar proportional drop was also experienced on SkyTrain Canada Line, which saw its boardings fall by 86%. It was tracking 143,000 per weekday in early March, but these levels fell to only 20,000 per weekday a month later.

On the bus system, similar depressed ridership levels are being experienced.

With in-class instruction suspended, Route 143 SFU/Burquitlam Station was also averaging zero weekday boardings at the top of the month.

The new R3 RapidBus on Lougheed Highway between Coquitlam Central Station and Maple Ridge saw 600 weekday boardings in early April, about a third of what it was recording in early March.

All four of these routes are amongst the 18 bus routes that have been temporarily suspended, as of last week, with the public transit authority explaining that alternative bus routes and services are available.

The public transit authority has already cut Expo Line capacity by 20% to 40%, depending on the time of day, while the Millennium Line has seen a capacity cut of 15% during peak hours and 20% to 40% during all other times.

SeaBus now runs with 30 minute frequencies, with the last sailings each day scheduled for 7:30 from Lonsdale Quay and 7:45 pm from Waterfront Station.

On West Coast Express, trains two and four have been temporarily cancelled, while the other three remaining scheduled trains are only running with two passenger cars each.

TransLink says overall transit ridership across the system has dropped by 83%, with 75,000 people still relying on their services daily.

Based on a recent TransLink survey, eight in 10 of these riders are making essential trips, four in 10 are essential workers, and one in 10 are current users who do not have any options to get to and from work.

With the latest service reductions and the physical distancing measures, especially on buses, the transit system is operating at just 18% of its normal capacity.

Due to physical distancing, self-isolation, and the closure of schools and businesses, revenues from fares and fuel and parking taxes have been severely impacted.

Even with the latest cuts to service levels and other reductions to operating costs, TransLink has only been able to reduce its monthly revenue shortfall from $75 million to about $50 million.

TransLink staff and the Mayors’ Council have been urging the federal and provincial governments to provide the public transit authority with emergency operating funding to reduce its need to perform further layoffs and allow for essential transit services to continue operating during the pandemic.

This funding is also required to restart the public transit system and return it close to normal service levels by September.

Currently, TransLink is on track to see a revenue shortfall of up to $680 million for 2020 and $885 million for 2021. The full fiscal impact stretching over several years could be up to $3.25 billion, more than the cost of the full SkyTrain extension to Langley.