TransLink announced today it will implement a number of changes to the bus routes servicing the North Shore on Monday, April 6 to complete an effort of integrating services with the new R2 Marine Drive RapidBus arterial transit route.

The R2 will launch on the same day, after a months-long delay due to road construction work. The region’s first RapidBus routes launch in early January.

Running between Park Royal and Phibbs Exchange, the R2 will have a total of 10 stops, including a stop at the Lonsdale bus exchange and SeaBus terminal. It will operate seven days a week, with frequencies of eight to 10 minutes daily from 6 am to 9 pm and 15 minutes from 9 pm to 1 am.

Students and staff at Capilano University can connect to the R2 and other routes servicing Phibbs Exchange with the new Route 245 service, running between the university campus and the bus exchange. It will offer 10-minute peak service during the summer, and additional service will be added in the fall.

As previously announced last week, Route 222 Willingdon Express will be a new peak-hour-only service, with frequencies of every 10 minutes during this period. It will have just six stops, serving Phibbs Exchange, Kootenay Loop, the intersection of Hastings Street and Willingdon Avenue, Brentwood Town Centre Station, BCIT, and Metrotown. 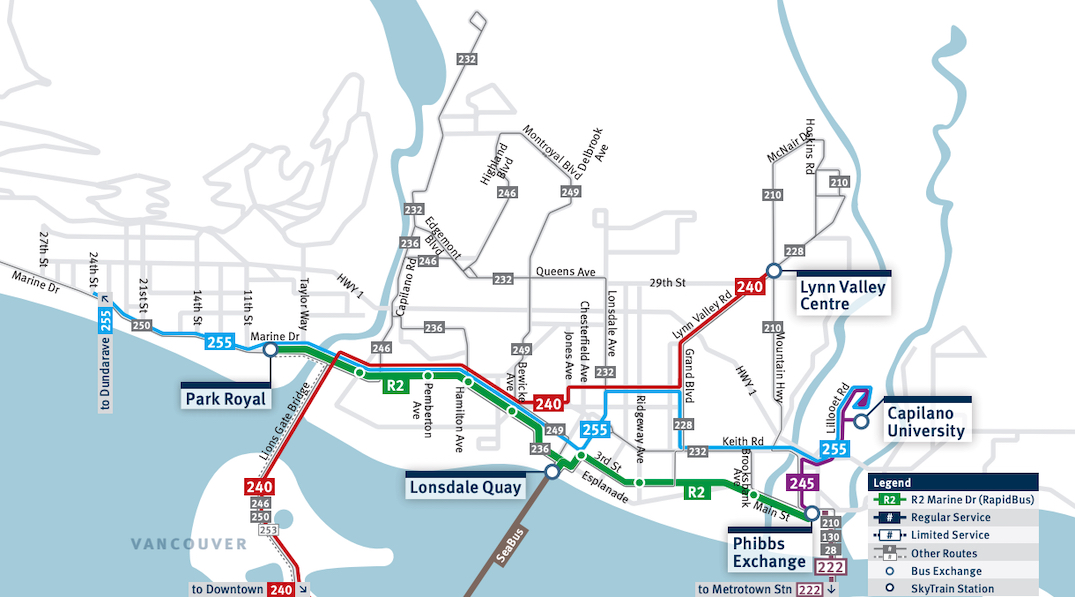 Route 240 from Downtown Vancouver to North Vancouver will see its terminus extended from Grand Boulevard to Lynn Valley to integrate it with the R2.

Route 239 Park Royal/Capilano University will cease to exist, as it will be replaced by R2 RapidBus and the increased service on routes 240 and 255.

As usual every year in early April, seasonal changes will be made to the region’s transit services to adjust for changing travel demand from post-secondary institutions and the peak summer travel season.

Services will be temporarily decrease to post-secondary institutions between early April and early September, including routes 9, 42, 145, 258, and 480.