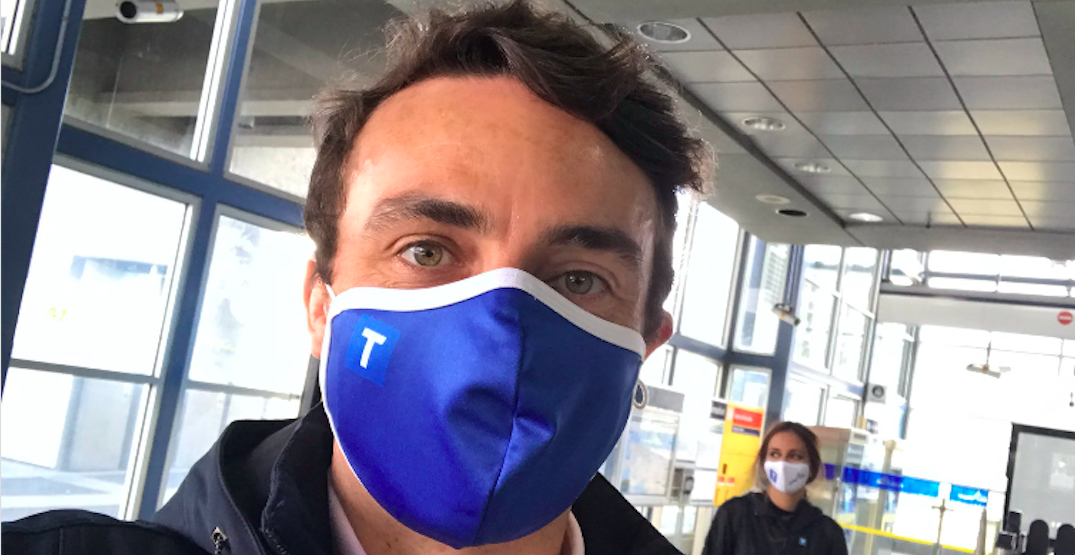 After recently urging its passengers to wear masks while on its system, it appears that TransLink will soon be rolling out its own line of branded masks for people looking to get one for themselves.

“TransLink is procuring branded masks which will be part of a campaign around wearing face coverings while on transit in Metro Vancouver,” TransLink spokesperson Ben Murphy told Daily Hive.

Part of this initiative, he said, is “to normalize the use of face coverings on transit as much as possible, given physical distancing will not always be possible.”

At this point, Murphy said details on how exactly the masks will be distributed are still to be announced, but “we’ll be providing more details on these branded masks in the coming weeks.”

In the meantime, Murphy said TransLink continues to recommend the use of masks on its system.

“Face coverings help to make transit safer for everyone on board,” he added.

The recommendation for face masks and coverings are amongst a number of new physical distancing protocols on SkyTrain and enhanced sanitization measures announced by TransLink.

On Monday, TransLink lifted its restrictions on how many people would be allowed on buses at once, two months after imposing them to help with physical distancing amid the COVID-19 pandemic.

The transit authority announced all buses will now be able to accommodate about two-thirds capacity before being deemed full.

At the beginning of April, TransLink reduced the normal capacity of buses by 30% through the measures of limiting seating capacity by 50% and banning standing capacity. Signs were posted onto the “closed seats” to evenly space out passengers across the bus.

The public transit authority said the capacity increase is necessary as a surge in ridership is expected under BC’s plan to restart the economy.