The transportation network problem of road traffic congestion in Metro Vancouver could be just around the corner, if current recovery trends keep up.

And this has TransLink concerned that the return of gridlocked roads could severely impede not only regional mobility, but also the reliability and travel times of its buses.

“We know that travel volumes aren’t as bad as they were before COVID-19, but they are returning and we’re concerned that the congestion will be as bad as before, if not worse,” said Sarah Ross, the director of system planning at TransLink, during Thursday’s Mayors’ Council meeting, illustrating the scenario where vehicle traffic volumes could be higher moving forward due to lower transit ridership.

Given the scenario presented, the Mayors’ Council unanimously approved the recommendation directing TransLink staff to quickly develop a report on bus corridors that can see the rapid implementation of bus-priority measures, such as low-cost bus-only lanes with new signage and paint.

Other measures could include turning restrictions so that buses are not held up at intersections, and the installation of bus bulges on the curbside parking lane so that buses can stay on the travel lane without having to pull in and out.

The public transit authority may also consider reducing the number of bus stops, specifically where stops are spaced too close together, which slows down a bus.

“The ideal is to find the right balance between not having buses too far apart but not close together either,” said Ross. “We have done an assessment and we do know that we have many corridors where bus stops are too close together. We have to consider the accessibility for bus stops for seniors and people with disabilities. We know in some cases we have bus stops on both sides of the intersection.”

She says TransLink does not have the jurisdiction to redesign and change roads, as it will be up to municipal governments to make the final decision. But the public transit authority can identify opportunities, provide some funding, and work with the cities to assess the impact and perform consultation with local communities and businesses. It will also be up to the municipalities to determine whether the changes are temporary for the duration of the remainder of the COVID-19 pandemic and economic recovery phase or permanent.

Ross acknowledged there needs to be a “right balance” between mobility needs, particularly for buses, and the needs of struggling businesses that are currently using road space as spillover patios and queuing areas.

“If there are sections of roads that are in commercial high streets where buses need to move slower, this can be balanced by [non-commercial] sections of the corridor where buses have priority and can move faster,” she said.

However, none of this is new to the Mayors’ Council. In October 2019, TransLink staff presented a report to the Mayors’ Council that stated 80% of the region’s bus routes are experiencing greater delays due to a lack of bus-priority measures and increased traffic congestion. These buses are traveling slower, compared to five years prior.

The report highlighted 20 of the most problematic bus corridors for delays, although a number of these corridors have since been improved by the new bus-priority measures of the recently launched RapidBus services. 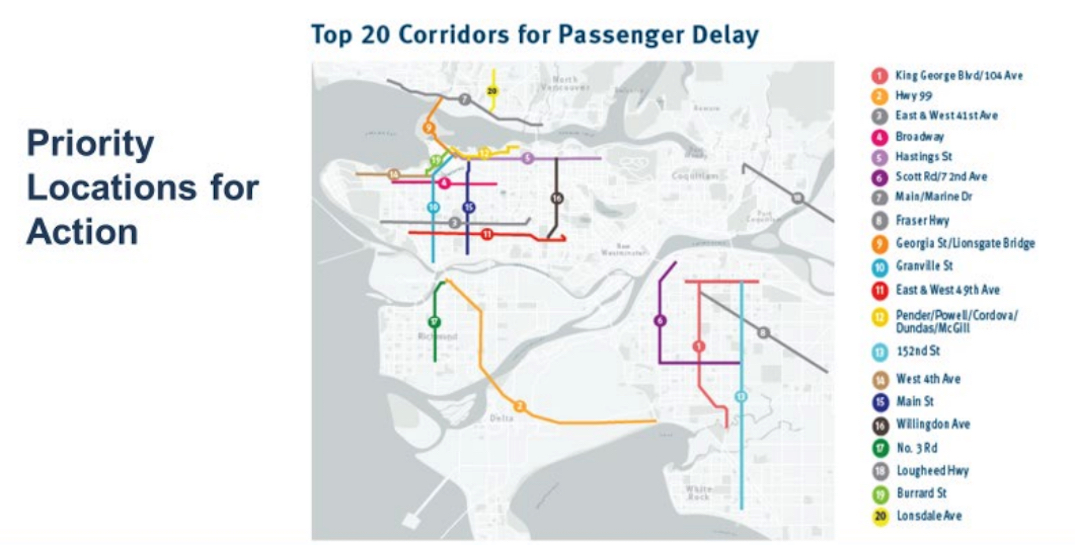 When it comes to municipal governments shutting down roadways on the region’s Major Road Network (MRN) as part of their pandemic response, Ross reminded the mayors that their cities are required to seek TransLink’s approval if they want to repurpose an active travel lane on the MRN. TransLink provides municipal governments with annual funding to help cover the maintenance and operating costs of these regional arterial roads, which span 675 lane kms.

For TransLink, implementing measures that speed up buses is also a matter of helping reduce its operating costs.

Reducing costs through operational efficiencies is now an urgent priority for TransLink, given its fiscal crisis due to COVID-19’s impact on revenues from fares and the gas and parking taxes. The public transit authority’s updated financial forecast estimates a revenue shortfall of between $544 million and $1.4 billion from 2020 to 2021. Ridership recently increased to 32% of normal levels, up from the pandemic low in early April of below 20%, but it could take a few years for ridership to recover to pre-pandemic levels.

“We know that given our financial situation and pressures on our operating budget, we need to be as efficient as possible with our bus services,” said Ross, suggesting the capital cost of the installing bus-priority measures will be offset by the reductions in operating costs.

This is particularly the case now, with buses running at 66% capacity (seated only) for the foreseeable future to allow for some onboard physical distancing. It currently costs significantly more to move the same number of passengers compared to normalcy.

While there was consensus on the effectiveness of bus-priority measures for mobility, some mayors addressed their concerns over the precise level of consultation that would be performed with municipal governments, businesses, and residents.

Richmond mayor Malcolm Brodie brought attention to the controversy 20 years ago over the proposed bus-priority measures on Granville Street in Vancouver for the now-defunct 98 B-Line, and most recently the bus-only lanes on Marine Drive in West Vancouver for the new R2 RapidBus.

Ross noted that TransLink’s approach moving forward will be to “work with the willing,” emphasizing that the public transit authority will look for receptive municipalities and business districts for “quick wins” on bus-priority measures.

Jonathan Cote, the chair of the Mayors’ Council and mayor of New Westminster, also said TransLink should focus on bus corridors in municipalities where everyone is aligned to ensure the public transit authority can “get the best bang for our buck.”

He suggested starting with testing the temperature of city councils and the particular business districts affected, before going too deep on planning changes for a particular bus corridor.

“We have a limited amount of resources. Step one is getting a willing partner from individual cities,” said Cote.

Port Coquitlam mayor Brad West was more than just direct, and even called the West Vancouver RapidBus controversy “a debacle.”

“My position pretty simply is we shouldn’t be wasting our time and money if the municipality is going to piss backwards on the investment, because there are lots of municipalities that would love the investment,” said West. “I think it’s the responsibility of city council, when they make the decision to support these investments to stand by those and to withstand whatever pressure they may come under.”

“I’m not interested in wasting time or resources in getting into a fight and trying to do something positive for a community then have it ultimately fall apart because of politics. There’s enough municipalities in the region that I think would welcome this, and I know mine certainly would.”