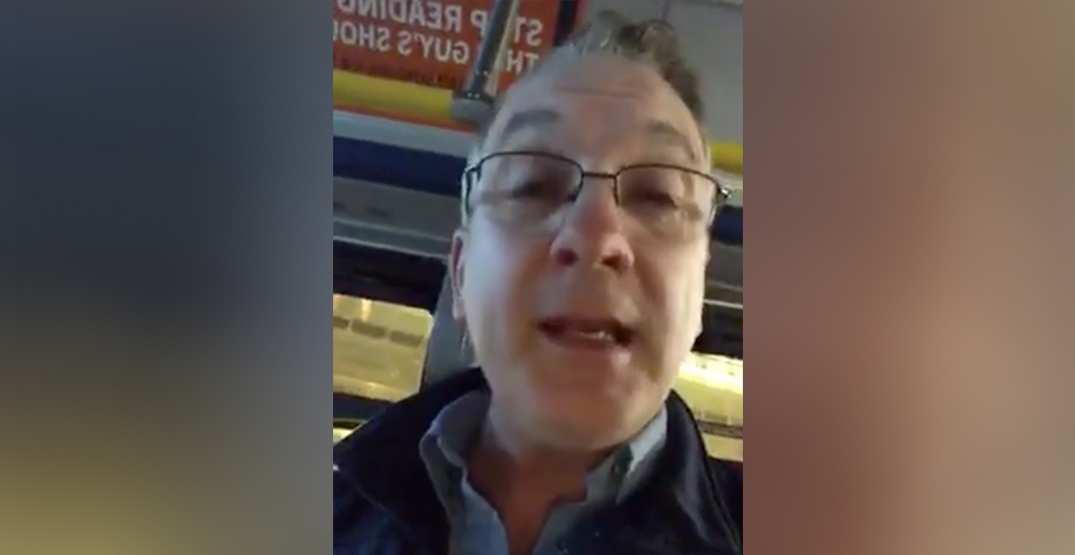 A public transit bus driver with TransLink subsidiary Coast Mountain Bus Company (CMBC) has made an impassioned plea to the public, asking them to avoid riding the bus as much as possible.

In a video posted onto YouTube over the weekend, the driver says he is “scared shitless” given that buses are small, confined spaces that make proper physical distancing difficult.

“We’re supposed to practice physical distancing and when you’re on a bus, and it’s a 40-ft bus, you’re supposed to stay about six ft apart. If you do some simple math, you should only get six people on the bus. That’s just over five people plus one driver,” he said.

He repeatedly emphasizes CMBC has so far made all the right steps by enacting preventative measures that help protect both drivers and passengers.

By implementing a rear-door boarding policy, there is more separation and less interaction between passengers and drivers.

Standing capacity is banned and about half of all of the seats on all buses are now blocked off by signs to provide some semblance of physical distancing between passengers. Buses with a passenger seat directly behind the driver’s seat are also taped and bagged off.

Other measures include daily enhanced cleaning and disinfecting measures of all buses and other transit property.

However, his troubles centre on the unruly behaviour of passengers.

“This is the reality of the bus now. They have this seat blocked off, and clearly you can see a bum print (on the garbage bag cover), so someone has been sitting here (behind my driver’s seat),” he said.

He then points to a pair of open courtesy seats without signs near the front of the bus, and says one of those seats should have been taped: “I know for a fact that someone has moved that sign because that’s not how they were taped on there on the yard.”

The driver also brought up his recent experience of picking up passengers at Marine Drive Station. Passengers queued at the bus exchange were physical distancing six feet apart, “but when they got on the bus, I don’t know what happened to their brains but they just sat down wherever they want.”

On another run operating Route 119 Edmonds Station/Metrotown Station, he informed passengers waiting at a stop that he was full — based on the newly established capacity rules — and that they would need to wait for the next bus. He says their responses were “fuck you” and “just do your job.”

“They were all going to work and they want to get to where they’re going, but there are also lots of other people out here like drunk teenagers that are not going to work, shit faced, and making fun of social distancing,” he continued.

If the message from government and health officials is not clear enough already, he implored passengers to take COVID-19 and the preventative measures seriously, and avoid using the bus for non-essential trips.

“Look man, would you put your kids on a bus right now? I come to work every day and I’m worried that I’m going to get this shit, and I’m going to bring it home to my family. Just don’t get on the bus if you don’t need to,” said the driver.

“I guarantee you that we’re going to get another wave because of dumb shit like this. I don’t blame the company, the company is doing what they’re supposed to be doing… I’m going to look after my kids tomorrow, because they need that and I need them to look after me. It just baffles me. I don’t know what to do.”

He says he still sees many senior citizens with carts on the bus daily performing grocery shopping trips, and urged the public to help their elders so that they do not need to make such trips.

To date, there have been at least four confirmed and known cases of COVID-19 amongst TransLink’s workforce. All of these cases are under CMBC and HandyDart, including drivers.

This a relatively small number considering there are over 7,000 staff under TransLink and its operating subsidiaries, including 5,000 under CMBC.

But other public transit authorities in other jurisdictions that are not keeping up with their fight against COVID-19 have not been as fortunate.

The Amalgamated Transit Union of North America reported today thousands of transit workers have been infected, and over 70 of these workers have died due to the illness.

Specifically on the MTA system in New York City, as of Monday, 59 of their employees have already died from the coronavirus, with the vast majority being bus and subway workers. The MTA says 2,300 employees have tested positive, and nearly 5,000 employees are under quarantine.