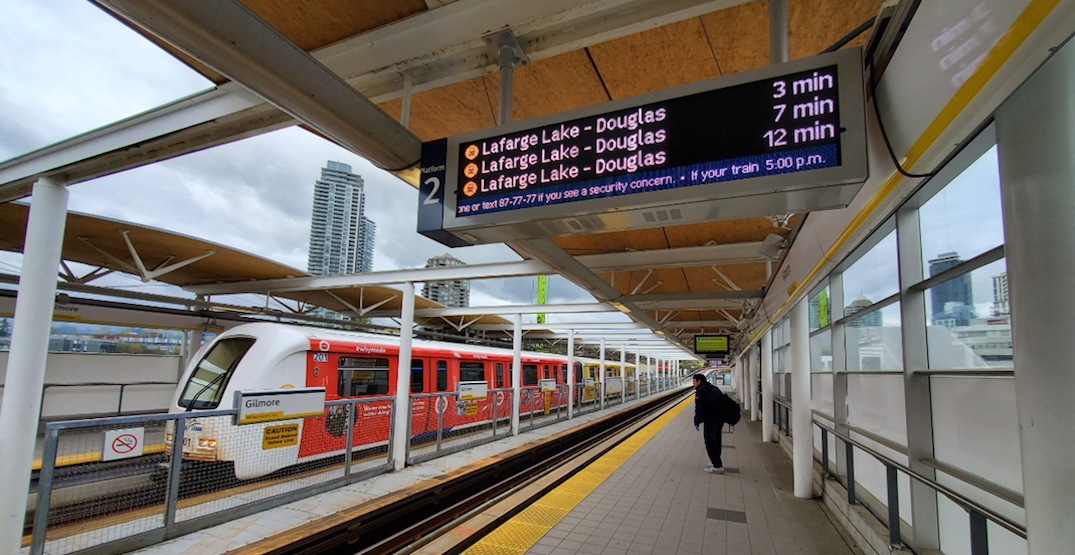 Ridership on Metro Vancouver’s public transit system started off strong over the first two months of 2020, before plummeting in the middle of March and throughout the course of the year.

Newly compiled annual statistics released by TransLink today paint the picture of the impact of COVID-19, with ridership reaching a total of 219 million boardings in 2020 — a year-over-year decrease of 52%.

TransLink’s ridership fell from 1.4 million daily boardings in February 2020 to about 240,000 daily boardings a month later. There was a strong rebound in ridership in June, when some health restrictions were lifted allowing a restart of the economy. By early Fall 2020, ridership rebounded to about 620,000 boardings per day.

Buses saw the strongest sustained ridership, with a 49% year-over-year change, followed by the Expo and Millennium lines at 53%, Canada Line at 60%, SeaBus at 63%, and West Coast Express at 69%.

According to TransLink’s 2020 ridership report, buses generated 64% of the systemwide ridership, and ridership on bus routes across the region that serve essential workers remained strong.

Eight of the top 10 busiest bus routes in 2019 were still amongst the top 10 routes in 2020, although there was a slight reordering, especially with the R1 King George Boulevard RapidBus and No. 319 Scott Road Station/Newton Exchange/Scottsdale seeing notable jumps in their rankings. The 99 B-Line continued to have the highest ridership, despite the drop in trips towards the UBC campus. 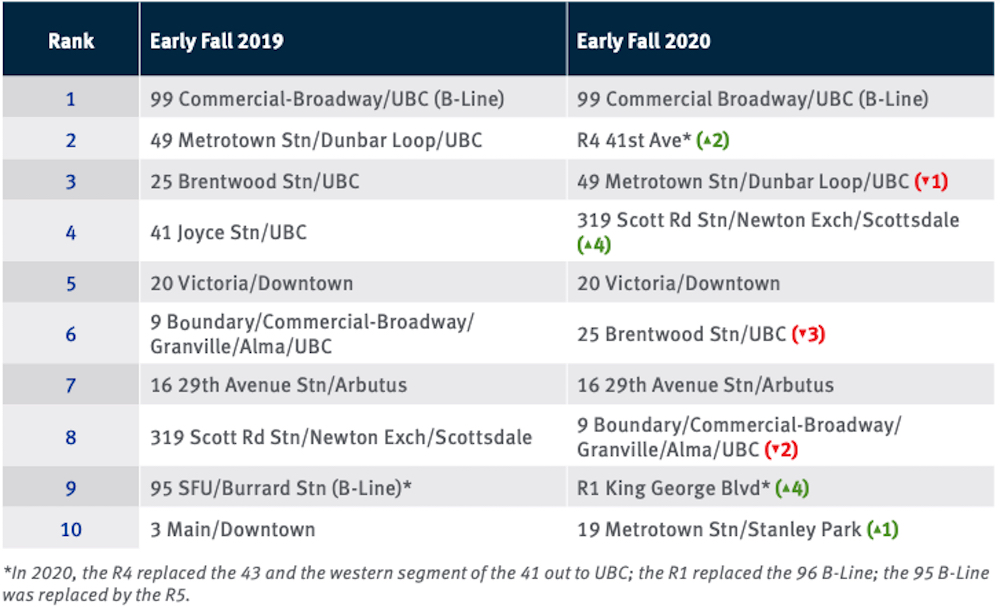 Overall, commuter routes to downtown Vancouver and post-secondary campuses saw significantly lower ridership recovery. For instance, the West Coast Express which mainly services office commuters to downtown recovered to only 17% of 2019 ridership volumes, and bus routes that only serve campuses recovered to 20% of pre-pandemic levels.

Ridership recovery on buses also differed across the region. TransLink’s southeast service area, including Surrey, Langley, North Delta, and White Rock, saw the highest return of bus ridership, with volumes at 55% of 2019 levels, which is higher than the network average of 44%. This is attributed to lower rates of working from home in this area.

As well, the public transit authority observed a shift in the timing of demand. Late night ridership after 9 pm dropped to 36% of 2019 volumes, and weekday off-peak periods and weekends have had higher ridership recovery than weekday peaks. 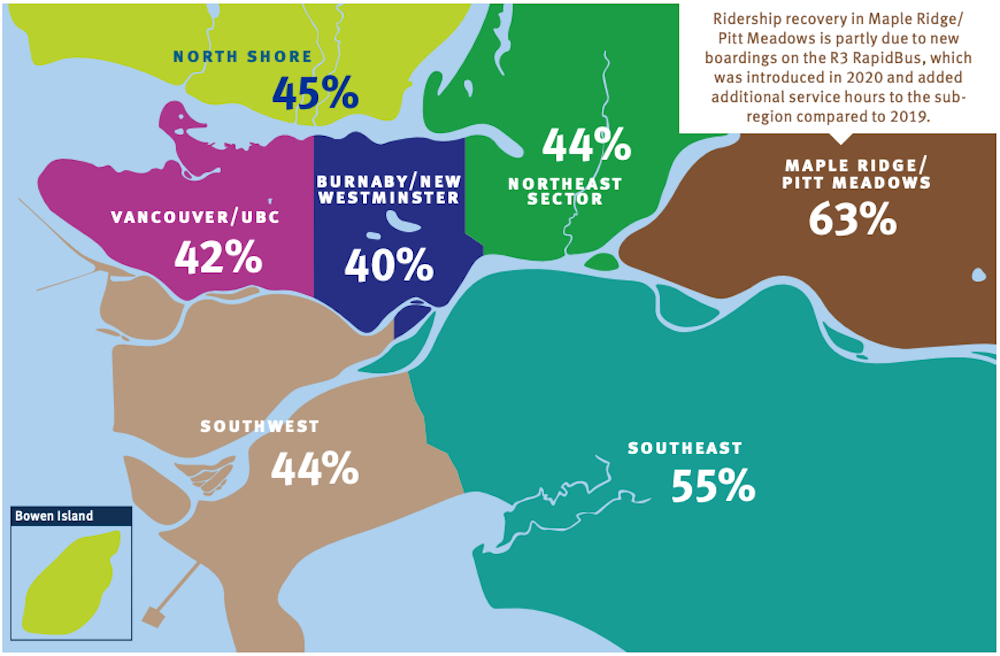 TransLink notes this year’s ridership report used a different method of analysis, as working from home and varying public health restrictions caused ridership to fluctuate greatly, meaning there was no average day to analyze in 2020. The statistics are based on the most stable eight-week ridership period between September and November, which “provides the most relevant data because it indicates how customers are likely to use the transit network as the region recovers from COVID-19.” 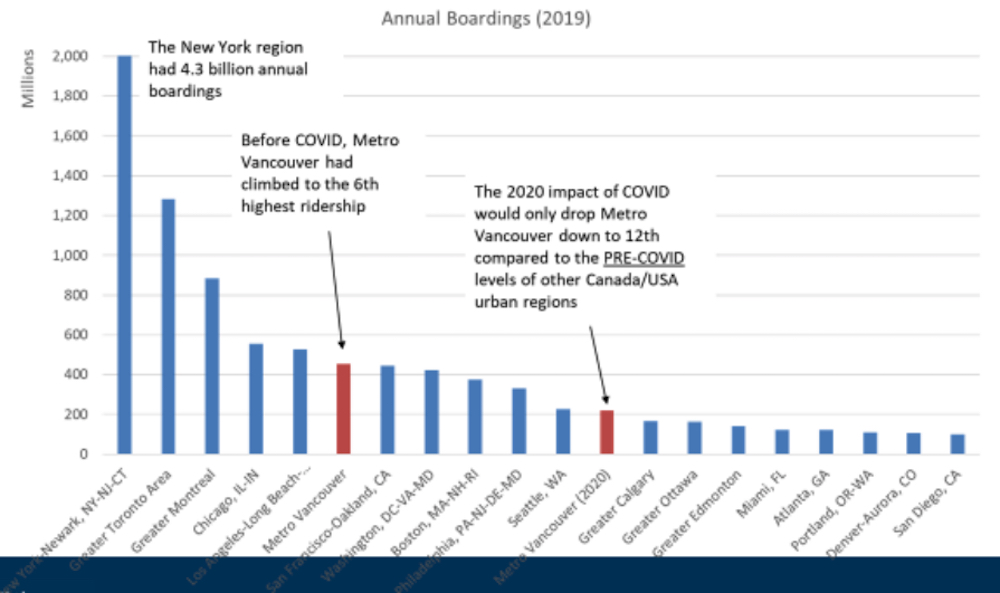 September 2020’s ridership on TransLink saw about 17 million boardings — exceeding boardings over the same month in regions such as Boston, Washington DC, and Chicago. Metro Vancouver’s ridership was also higher than the regions of Seattle and San Francisco combined. Moreover, TransLink’s 2020 ridership is equal to pre-pandemic Seattle.

TransLink recorded one of the highest ridership retention rates among the 10 busiest systems in Canada and the United States. It retained 48% of its ridership in 2020, second only to Los Angeles, and is fourth in per capita ridership and sixth in total boardings.

“Despite major decreases in transit ridership on transit systems across North America, ridership on our system remained relatively high compared to other metropolitan regions,” reads the report.

TransLink’s ridership recovery of 41% in early Fall 2020 is also comparable to what has been experienced by other major Canadian regions, with Greater Toronto and Hamilton at 41%, Greater Montreal at 40%, and Calgary at 51%.

Ridership volumes in Metro Vancouver are expected to soar over the coming months from increased vaccination levels and the gradual relaxation of health safety restrictions. Health officials indicated this week BC could be very close to “normal” as early as September 7, when concerts could be given the green light to return.

Post-secondary institutions are also preparing for the resumption of full in-class instruction at the start of the new school year.

In London and Melbourne, ridership has recovered to about 50% of its pre-pandemic levels. The recovery has been even stronger in Auckland and Sydney — 90% and 75%, respectively — where the coronavirus’ spread was generally limited over the past year.