Written by Darren Davis for Vancity Buzz. Davis is a proudly car-free principal public transport planner at Auckland Transport with over 20 years experience in transport in Auckland, starting out as a rabble-rousing public transport lobbyist, who evolved into being a planner, strategist and consultant. He has produced high level strategic policy advice, successfully influenced regional and national government agencies, been involved on-the-ground in major transport infrastructure, carried out public transport service design and worked on Transit Oriented Development projects.

In early October last year, I had the privilege to spend 10 days in and around the Metro Vancouver region. And being a professional transit nerd, I did what transit nerds do and rode transit – and did other stuff too like eat, drink, hang out and have fun.

Like many Vancouver residents I had my issues with the transit system. The biggest issue I had was that buses would turn up so soon after my arrival at the stop that I didn’t have time to assemble $2.75 in change to pay the fare. I quickly solved this issue by purchasing a pack of FareSaver tickets at a 7-Eleven.

The other issue I had was long waits for buses. One time at 11 p.m., I had to wait a whole nine minutes for a bus. And at YVR Airport, I missed the departing Canada Line train but before I stopped cursing under my breath the next train turned up. 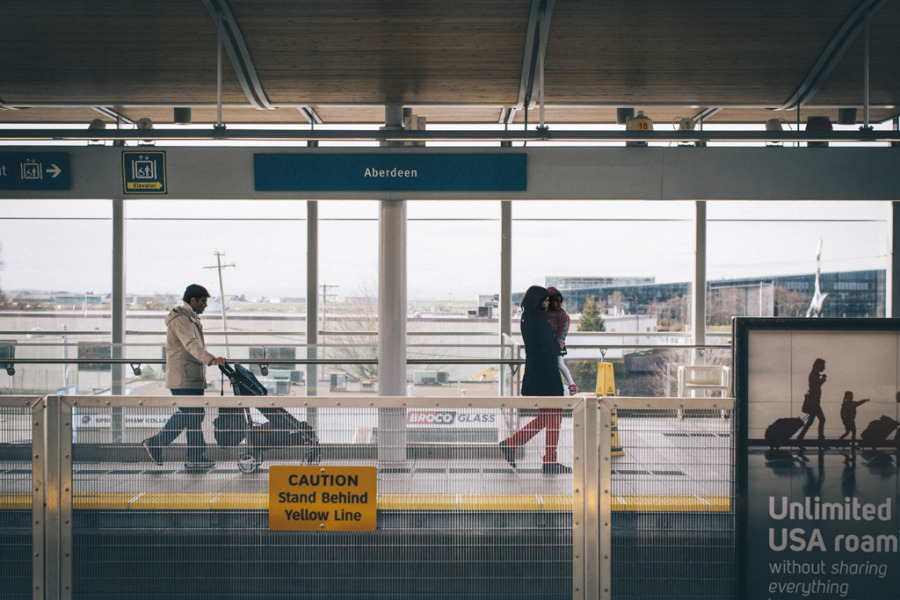 And the biggest mistake I made was massively overestimating the time it would take me to get from one place to another. One day I had to get from English Bay to Gastown for a lunch date at noon. Based on my Auckland experience, I set out at 11:10 a.m. I had a choice of the #5 Robson or the #6 Davie bus. I got on a #6 Davie and made it to the corner of Granville and Hastings by 11:25 a.m., then walked five minutes to Hastings and Cambie for my lunch date, getting there at 11:30 a.m. I then got to enjoy Victory Park for half an hour. The point I’m trying to make is that TransLink’s network gave me a bonus half-an-hour of my life over my current expectations from my hometown of Auckland.

My generally pleasant encounters with Vancouver’s transit system was at the conclusion of a 10-city trip in Canada and the U.S. with highly variable levels of transit service from dismal to fairly good. But Vancouver’s system was easily the best – something that Vancouverites really should treat as a source of pride, not acrimony.

Probably the most striking thing for me was the lack of appreciation, even disdain, for the service that TransLink provides. I suspect that this is a case of “you’re used to what you’re used to” taking the status quo as a baseline and judging the system as a whole by instances of less-than-perfect performance. This is an example of perception driving reality. 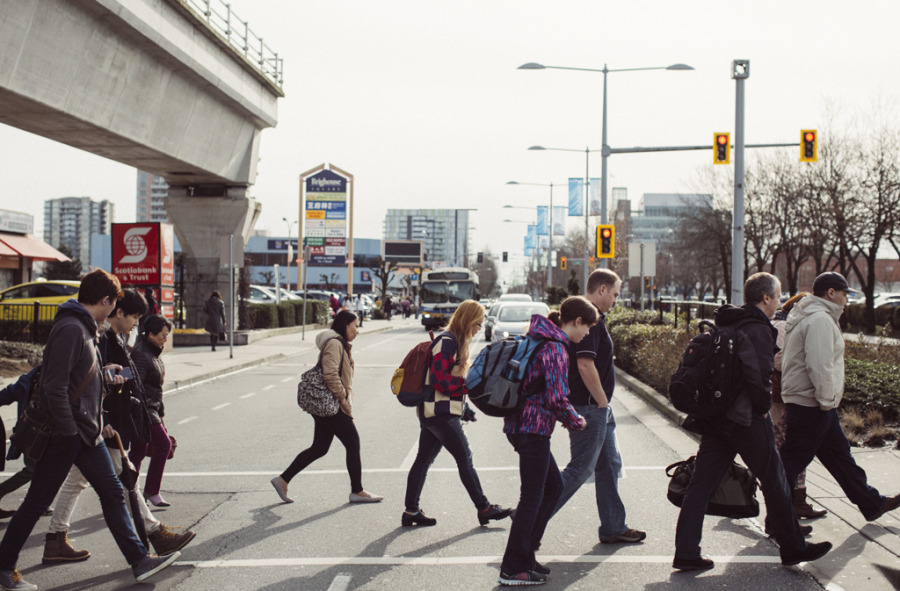 This is why people like myself, and many other observers from around the globe are flummoxed and somewhat perplexed by the debate going on in Vancouver about future transport investment that appears to have descended into a slanging match about TransLink and its alleged catalogue of sins. No transit referendum has, or could or should, attempt to solve issues of structure and governance. These sorts of issues are best sorted out between Metro Vancouver and the province.

In Auckland, we are working very hard on a mammoth project called the New Network to do a first principles review of every transit route in our city, mentored by international transit guru Jarrett Walker. What this review does is to convert what I have uncharitably characterised as “throwing spaghetti at a map” into something resembling what Vancouver already has but strikingly fails to appreciate: a simple but dense grid of frequent bus service in the core, tightly integrated with a hyper-frequent SkyTrain and SeaBus network that links the city to key destinations such as Metrotown, New Westminster, Lonsdale Quay on the North Shore, Surrey, Richmond and YVR Airport, which in turn is integrated with a bus network that links to the rest of Metro Vancouver. On top of this, all of these centres are dense and very urban in their own right, which contributes significant ridership to SkyTrain, which in turn supports this hyper-frequent service. If this isn’t a virtuous circle, I’m not sure what is. 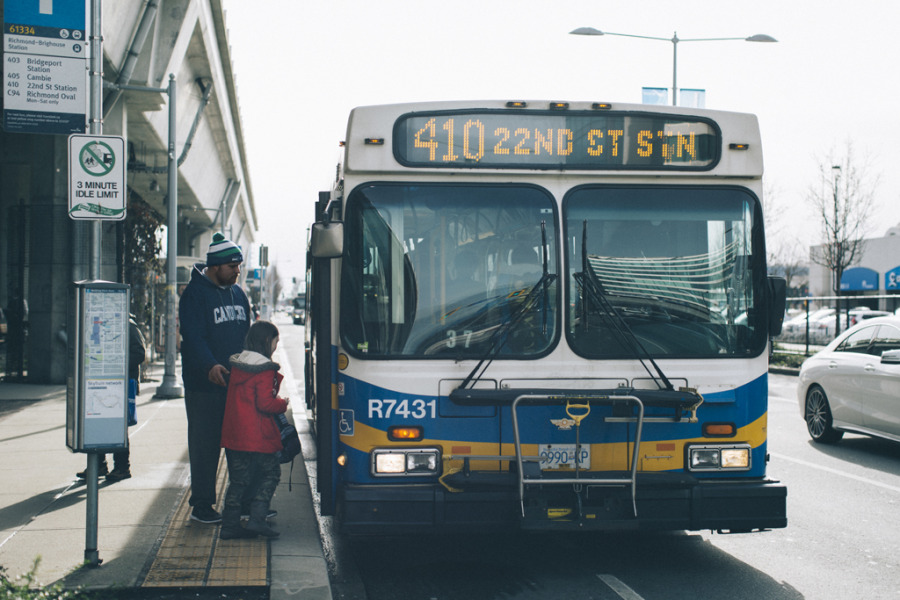 Let’s get real here: Midday rail service every six to seven minutes every day of the week combined with SkyTrain sections every three to four minutes, is the sort of frequency generally only enjoyed by long-established cities such as London, Paris and New York with a century-long tradition of intense transit service and the sort of infrastructure that supports this. For a new world city that has developed relatively recently, Vancouver is definitely a positive outlier.

A more typical train service pattern considered to be good is every 10 minutes in the peak and every 15 minutes midday and weekends. This is our end goal in Auckland and while we’re well on our way, we haven’t got there yet.

In Auckland, the New Network has been implemented in a few areas, unfortunately not my own. So in the meantime I have to contend with the “spaghetti thrown at a map” network. This requires me to run an algorithm in my head for any trip involving a connection to determine whether the timetables mesh, whether I have enough time to make tight connections and how dire the consequences are of missing connections. And if frequencies are low or timetables don’t mesh well together, the algorithm determines that I should simply give up and not do the activity I had wanted to do. In this way Auckland’s current transit system decides my life for me, whereas the New Network will enable my life, as is already very often the case in Vancouver. 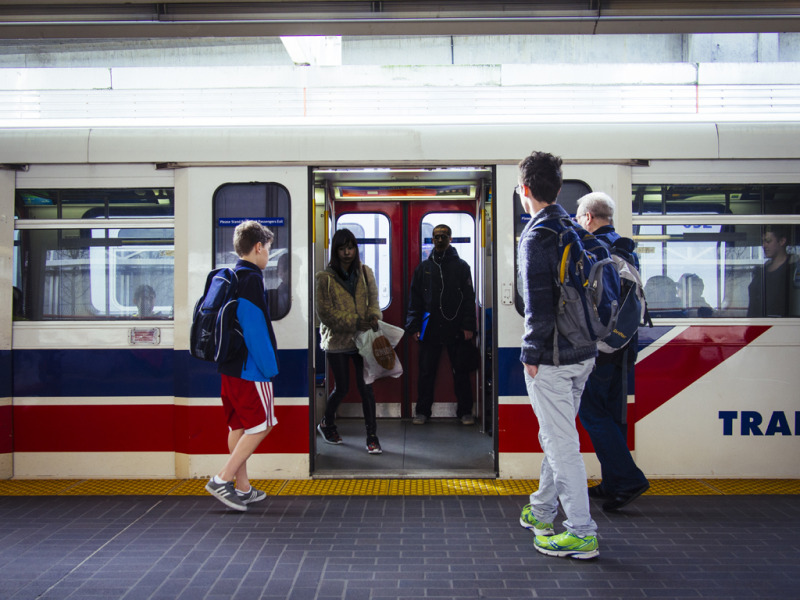 I am aware that the benefits of the easy accessibility enabled by frequent transit are much stronger in the core than in more outlying areas. And this will stay the same indefinitely for the Langleys and White Rocks of the world if there is a No vote that prevails in the Transit Plebiscite as there will be no money to improve transit service.

The irony of the Plebiscite is that it will be won or lost in the suburbs, which stand to be the biggest losers from a No vote. This is simply because there are already more choices to get around in the core from frequent bus and SkyTrain services to a growing network of safe separated cycle infrastructure to fairly complete walking networks.

Put simply, a Yes vote will, in relatively short order, enable much improved bus service for the suburbs, including many more frequent limited stops B-Line services for longer journeys as well as a light rail network from Surrey City Centre towards Langley and White Rock. This combination of improved local bus service, more B-Lines in the ‘burbs, light rail and improved cycle infrastructure will bring the suburbs much closer to the level of abundant transit access enjoyed in the core of the region.

But again, this can only be enabled by a Yes vote in the Plebiscite. And remember that a Yes vote is the only way to improve travel choice for the suburbs where all too often the car is chosen for people as the only viable choice.

The Transit Plebiscite is about enabling more choice for people, not making the choice for them, which is a continuation of the status quo would do. As far as I am aware, there are no plans to force people on to transit, cycling or walking, although there are clear benefits from all three and also clear benefits for people who need or want to continue to drive through other people choosing to ride transit, walk or cycle.

I am also aware that Vancouver’s transit system isn’t always perfect. I feel for the people on the 99 B-line on Broadway who experience daily sardine conversions and can understand the frustrations during SkyTrain breakdowns when, as is typical of cities world wide, operators focus on the task of restoring service and all too frequently forget the other critical task – telling customers what is going on and how long it is likely to take to restore service. And yes, some of the infrastructure is in need of improvement. And I am still traumatised by my visit to the Phibbs Exchange, and its amazing “air-conditioned” bus shelters, in the old BC Transit days of the mid-1990s. Apparently, it’s due for a major upgrade and that can’t come soon enough. 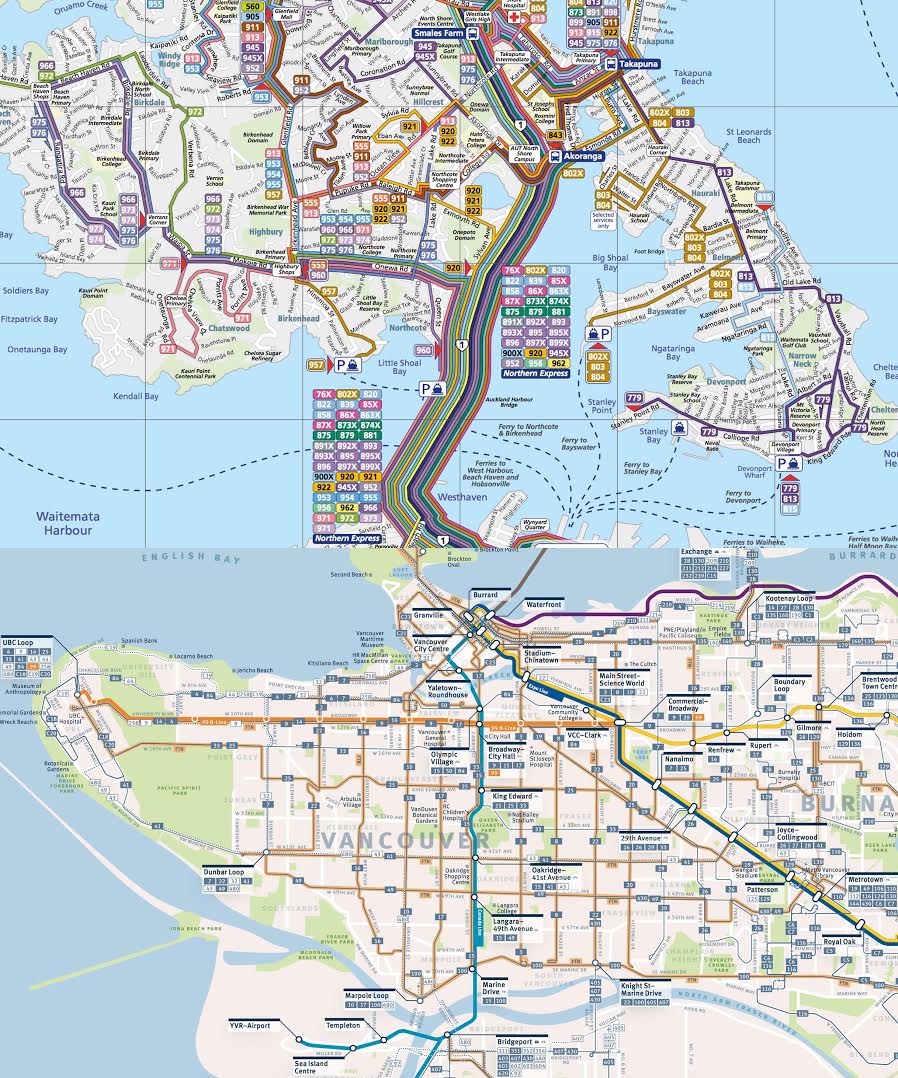 Auckland’s current North Shore network (top) has been uncharitably been described as “spaghetti thrown at a map.” Auckland is working very hard on our New Network which aims to approximate the dense grid of frequent transit services enjoyed in the City of Vancouver (bottom).

But that said, transit systems can and do break down when they are under stress and are under-invested. Which is why they need ongoing investment, not just in capital but in operations. And one of Vancouver’s supreme ironies is that TransLink’s amazing success at quickly growing transit ridership has helped starve itself of one of its very own revenue sources – gas tax – needed both to keep the system running and to expand the system to keep pace with strong population growth.

I am aware the TransLink CEO is paid substantially more than my modest bureaucratic stipend and there are debates about the artistic merits of poodles.

Perversely, a No vote would give Translink no real incentive to change as it would simply be managing the genteel decline that will be inevitable consequence of a no vote. Conversely, a Yes vote gives TransLink a substantial reason to retool itself to meet the substantial new challenges, and a renewed sense of purpose and mission would come from a Yes vote.

Put simply, a Yes vote is in everybody’s enlightened self-interest from car drivers to transit riders to cyclists and pedestrians. And we are all one or more of these every day of our lives. In spite of all of the rhetoric to the contrary, it is a No vote that is far more likely to entrench the status quo at TransLink, not a Yes vote. And a No vote will make everyone a loser, but most especially those in the suburbs who currently have the fewest choices on how to get around.