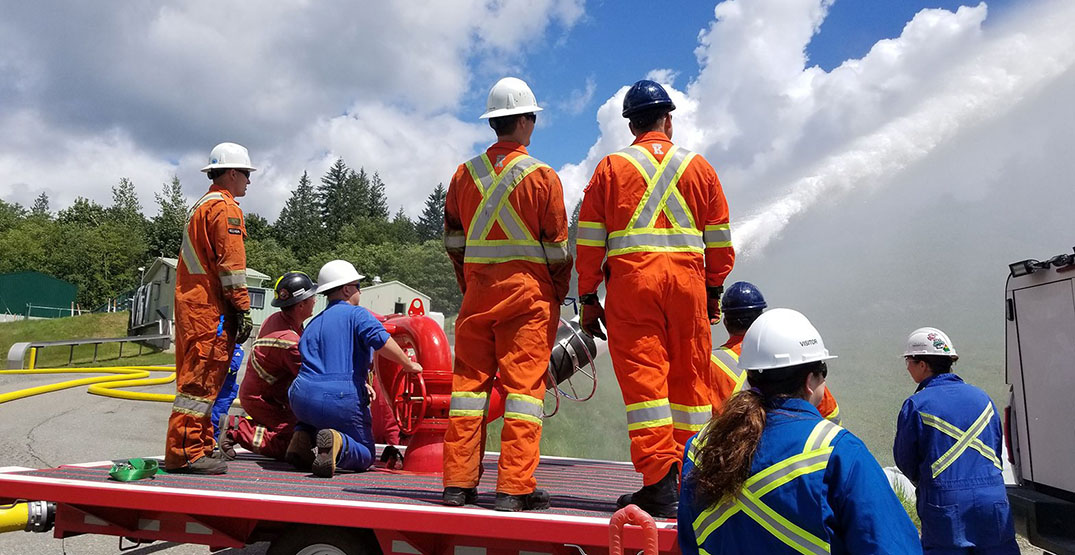 Staff practice an emergency drill at the Sumas Terminal. (@TransMtn/Twitter)

Crude oil spilled from the Trans Mountain pipeline in Abbotsford early Saturday morning, and crews are working to clean it up.

In a statement from Trans Mountain Saturday, the pipeline operator said it did not yet have an estimate on how large the leak was.

It happened at the Sumas Pump Station, and the pipeline was shut down once an alarm alerting staff to the problem was received. Local crews are investigating, and say the spill has been contained.

“Applicable regulators have been notified and there is no threat to the community,” Trans Mountain said.

It has also launched an investigation into the cause.

The crude oil pipeline transports diluted bitumen, a type of heavy crude, from Alberta’s oil sands to port in Burnaby, BC. The federal government bought the pipeline from energy company Kinder Morgan for $4.5 billion in 2018 amid struggles over the expansion project to triple the existing pipeline’s capacity.

Local Indigenous leaders issued a release Sunday saying this leak is evidence that the expansion project must be stopped.

“We cannot continue to have our land desecrated by oil spills. This is the fourth time in 15 years that this pipeline has had a spill on our land,” Chief Dalton Silver with the Sumas First Nation said.

According to the Union of British Columbia Indian Chiefs, the oil that spilled leaked into a neighbouring field that’s used as a grazing pasture for cows. It said the animals have been moved.