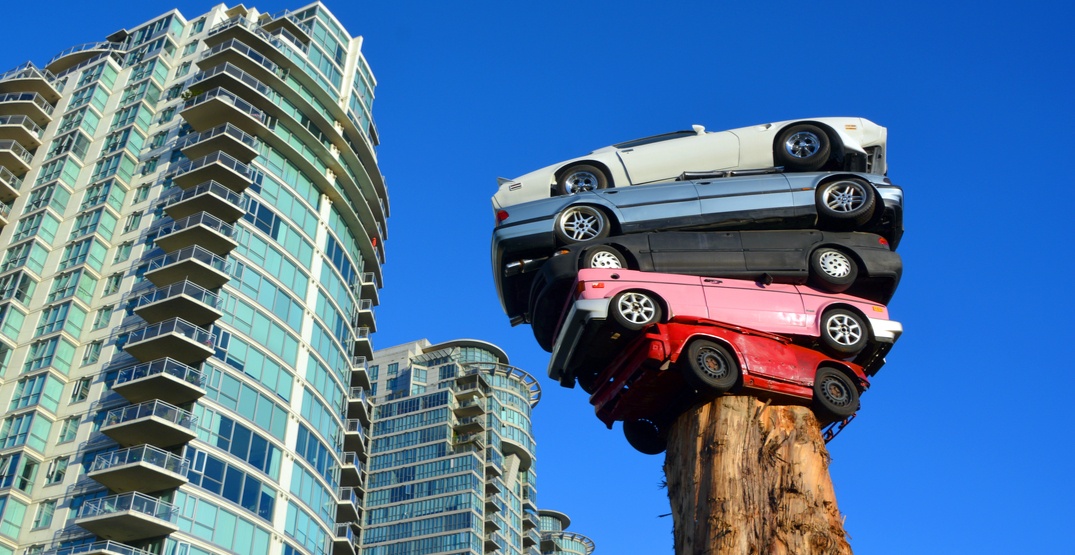 A piece of public art known as the Trans Am Totem, which has been a staple near Science World since it was unveiled in 2015, is scheduled to come down this September.

There’s just one issue: No one’s really sure where it’s going to go.

Marcus Bowcott is the artist behind the piece.

He told Daily Hive that the City of Vancouver has informed him the piece “will not be considered for installation in the future False Creek Park because it has been “previously installed.'”

So what to do with it, then?

“We’ve had inquiries from different people and organizations but it’s too early to say where it’ll end up,” said Bowcott. “Maybe in the Greater Vancouver area, maybe in another city like Calgary or Seattle.”

The piece was created as part of a Vancouver Biennale public art exhibition and ultimately, Bowcott said he and Vancouver Bienale would like to see it sold.

Bowcott said Vancouver Biennale has put a $250,000 US price tag on the piece.

But if no prospective buyers or new locations are found by September, he will “consider different creative possibilities if that comes to pass.”

Looking back at his creation of the piece and the run it has had in Vancouver, Bowcott said chance “has played a big role in the making and installation of Trans Am Totem.”

Having it sponsored by the Vancouver Biennale was “out of the blue – unexpected,” he said.

“The Vancouver Biennale’s sponsorship has been great and there’s been tremendous public engagement, beyond anything we could have imagined.”

Trans Am Totem has also been helpful in getting some of his other work out into the public realm, said Bowcott.

“Last summer, my partner Helene Aspinall and I were invited by the Tollwood Festival to build a related sculpture – An Apparatus for Divining Capital, in Munich, Germany.”

As well, “the Haifa Museum in Israel just invited me to exhibit work relating to consumerism, art, and shopping.”

Most recently, said Bowcott, there has been a request by the Seattle Public Arts Master Plan to include Trans Am Totem as an example of a “Natural Centre,” which he explained are “sculptures that bring the natural world into Centre City, connecting us to natural worlds beyond urban boundaries; works about the environment and climate change, as well as works that use weather, natural processes, and natural materials in their generation.”

Trans Am Totem, he added, “seems to have struck a note about the humour and sadness of our human predicament in relation to our natural world and our technology.”