No, this isn’t so we can play a game of “What if?”, as much fun as that would be. There will be no time travelling fans who show up at game 1 of the Finals to warn Hamhuis about throwing hip checks in this story.

No, let’s head into the aftermath of 2011. The team had just completed one of its best seasons of all time. It had fallen agonizingly close to the ultimate goal of winning a Stanley Cup by one game.

With the memory of Bettman and Chara hoisting the Cup on the ice like they’d just taken over Nakatomi Plaza fresh in everyone’s minds, most fans just wanted to know one thing: how soon until they get back to the Final?

Now, Vancouver isn’t a stupid town. Too many yoga mats? Sure. But the city knows its hockey. Vancouver had been through this before. People knew it wasn’t as easy as waving a magical wand and *poof* you’re back in the Final. But this was the best regular season team Vancouver had ever compiled. Surely with a bit of tinkering here or there, they’d have at least one more solid playoff run in them, right? 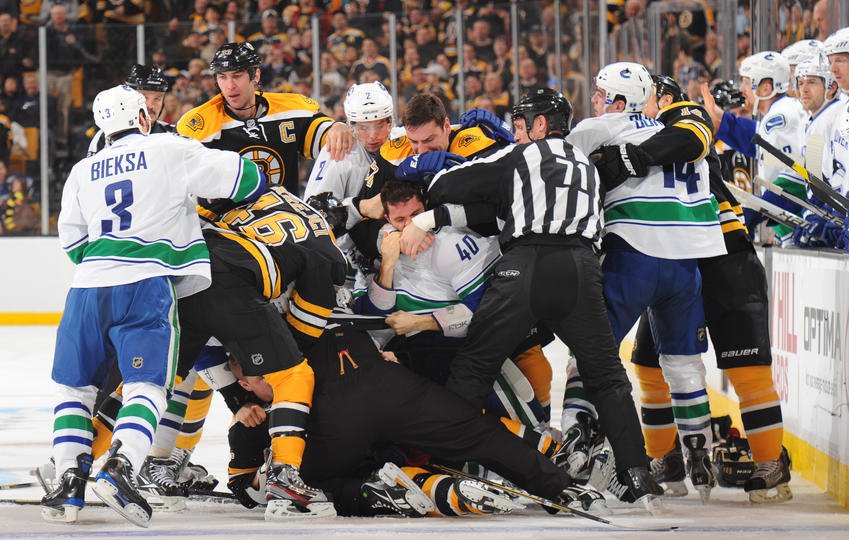 2012 started out rough, though. That Finals run? The Canucks paid a price for that one.

The point is, the team limped into the season, missing some key pieces (Ehrhoff gone in the off-season and Samuelsson traded in October), and having some players still recovering from off-season injuries and surgeries. Add in Duncan Keith’s elbow of doom on Daniel Sedin at the end of the season, and it wasn’t exactly shocking that the Canucks lost in the first round to advanced stats darling LA Kings.

But that was just the Stanley Cup hangover year. That could be forgiven. Now 2013? That was the year to see if this core had one last great run in it. 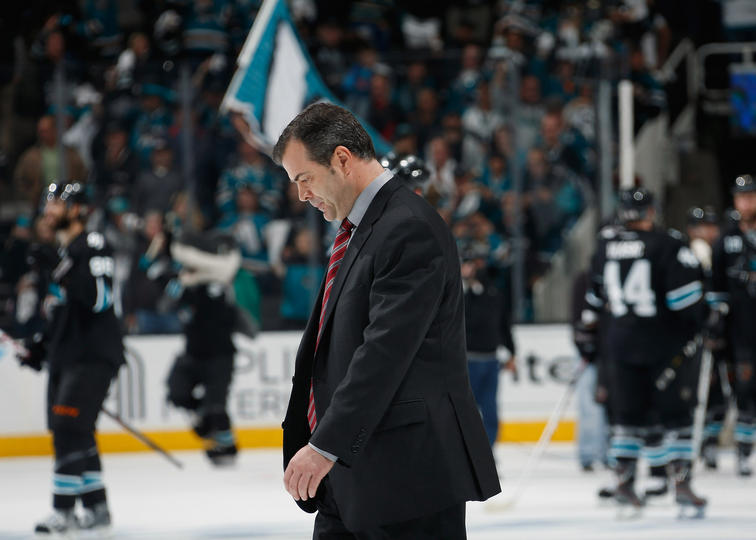 Except it didn’t. It didn’t even come close. Four straight games to the Sharks, and it was over.

In the blink of an eye, that 2011 team that had climbed through the ranks, losing to Chicago year after year, “learning how to win” in painful loss after painful loss until reaching the top, was nowhere to be seen. Two quick first round exits in a row, and it had you wondering if Vancouver was lucky it got that first round series win against Chicago in 2011.

Whatever window the Canucks had had, they seemingly hit the apex of it during that 2011 run. And despite hindsight being 50/50, even if you found a time machine (I lied, this story has a time machine after all), you still wouldn’t go back to 2012 and demand a rebuild. It just wouldn’t have made sense. There is no reason you don’t give a team that went all the way to the Final with that roster another couple of years. They earned that right.

Where things went off the rails, however, was the 2013-14 season. That was when things, to quote Tyler Seguin, got “odd as shit.” 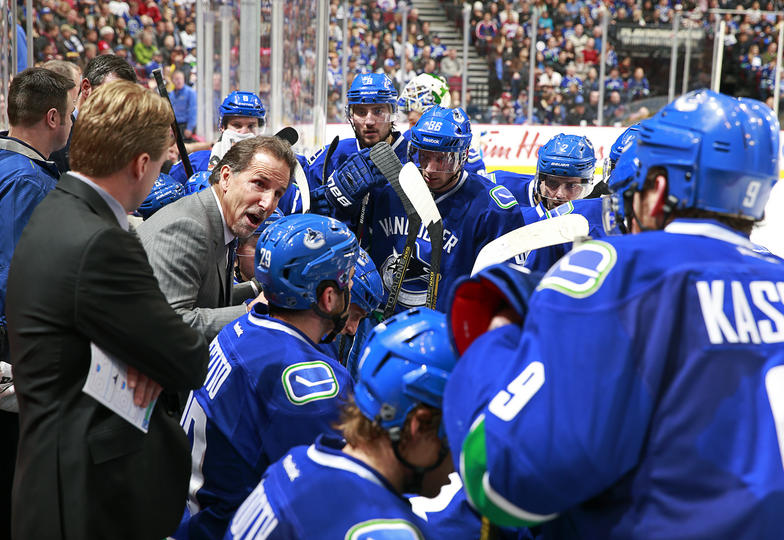 Instead of the rebuild that should have started that year, the off-season started with an odd report. “John Tortorella up for the job in Vancouver.” It was initially laughed off, because that was all sorts of crazy. It didn’t make sense for a variety of reasons. One, Torts seemed like the last kind of coach Mike Gillis would hire, and two, the team wasn’t really in need of a coach like Torts. He just didn’t seem to fit their vibe.

But before you knew it, Torts was in YVR, he was hugging dogs left and right, and he was named coach of the team. And it felt weird right from the start. Mike Gillis, not the happiest looking of men at the best of times, looked even more pained then usual. That’s when the rumours started that ownership might have had a hand in the hiring of the coach. That maybe Gillis had his hands tied on this one, and it was the Aquilinis who wanted Torts to coach the team.

A story like that isn’t unusual in Vancouver. People like to fill in the blanks all the time here, ending up with wild theories to explain things. What made this story stand out was when the Aquilinis threatened legal action against two newspapers for alleging they had anything to do with the hire.

This was the end of the delightful stories of the owners being really big fans who liked to party in San Jose, and instead turned into a Misery style, dirty birdy coackadoodie escapade.

The 2013-14 season was, by all accounts, a tire fire. John Tortorella, who to be fair, talks a great game, ended up looking more like a used car salesman than an NHL coach. We don’t have time to cover that season here, but just do a brief run through of it in your head and the vision of Torts trying to hunt down Bob Hartley (in what I assume The Revenant was based off of) kind of sums up that season. Watching the Sedins try and block shots with their faces was an interesting time in Vancouver, I will admit.

So the Canucks end up missing the playoffs, but luck out in losing well enough to get the sixth overall pick. They parlay that into Jake Virtanen, and it looked like the perfect time to do a re-build. Hell, that was the plan that Gillis and Laurence Gilman knew they had to put into action for the next season to turn things around.

Except Gillis was fired before they could do it, and in came the boy next door, all grown up now, Trevor Linden. The former saviour on the ice was now here to become the saviour off of it. It was almost too Hollywood to be true. 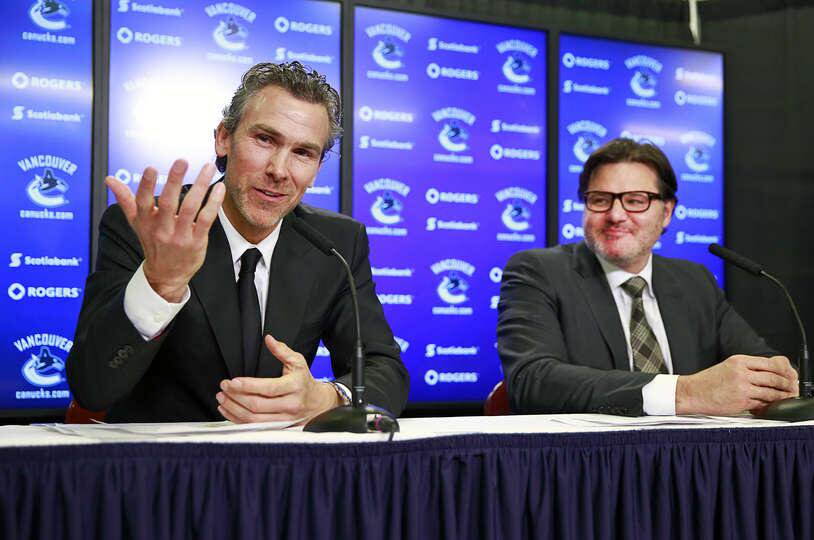 Sure, many argued that Linden was a PR hire, brought in to quell the masses of angry fans and to help prop up ticket sales. But surround Linden with enough hockey guys, and what harm could it do to have the former boy wonder back in town? Is there anyone who can smile and shake hands better than Trevor?

Jim Benning enters the picture, along with John Weisbrod, and now Vancouver has a new regime, ready to take on the arduous task of a rebuild of a once proud franchise. Even though Torts was eventually fired by the new regime, even he admitted that the core had been stale since day one, and that it was time for some fresh blood.

Except there is no rebuild.

Nope, not yet. With tales of Edmonton being used like the boogeyman hiding in your closet, a rebuild was thrown out. Instead, the word “re-tool” became all the rage. In fact, the word “rebuild” was looked upon with disgust, as if the mere fact of mentioning it might resurrect Lord Voldermort himself.

Benning signals the beginning of the re-tool by signing veterans Ryan Miller and Radim Vrbata. These are moves you make to remain competitive, not to give the team over to your youth. But with a weary nod of their heads, Canucks fans accepted this approach. Sure, maybe a losing culture isn’t what the team needs. Maybe there’s something to that old adage of “get into the playoffs and see what happens.”

And by god did it seem to work right out of the gates. Exceeding all expectations the Canucks stormed out of the gates in 2014, armed with a new coach in Willie Desjardins. They put up 101 points in one of the better seasons in Canucks history. Despite seeing some cracks in the foundations, people had to admit, maybe Benning was onto something.

Then came the series against the Flames, where once again, a first round exit was Vancouver’s prom date. They lost 4 games to 2 and looked slow and old in doing so. They made the Flames look like world beaters to the point where CBC almost created a national holiday to celebrate 18-year-old Sam Bennett.

The worst part, though? The Flames looked like absolute trash against the Ducks in round two.

Once again, Canucks fans found themselves looking at a duct taped version of the 2011 team, wondering when the re-build was going to happen. Once again, management talked about “re-tooling”.

Enter this season. A season in which the playoffs was presumably the goal all along, to the point where it felt like the team was convinced it might make the playoffs even up until the last few weeks. All of a sudden “making the playoffs” became a magical tonic that would teach the young players on the team how to become better players. The idea that losing a first round series would somehow teach Jake Virtanen how to become a far better player seemed odd, but hey, that’s the thing about intangibles. Sometimes you just have to shrug your shoulders and hope they exist. 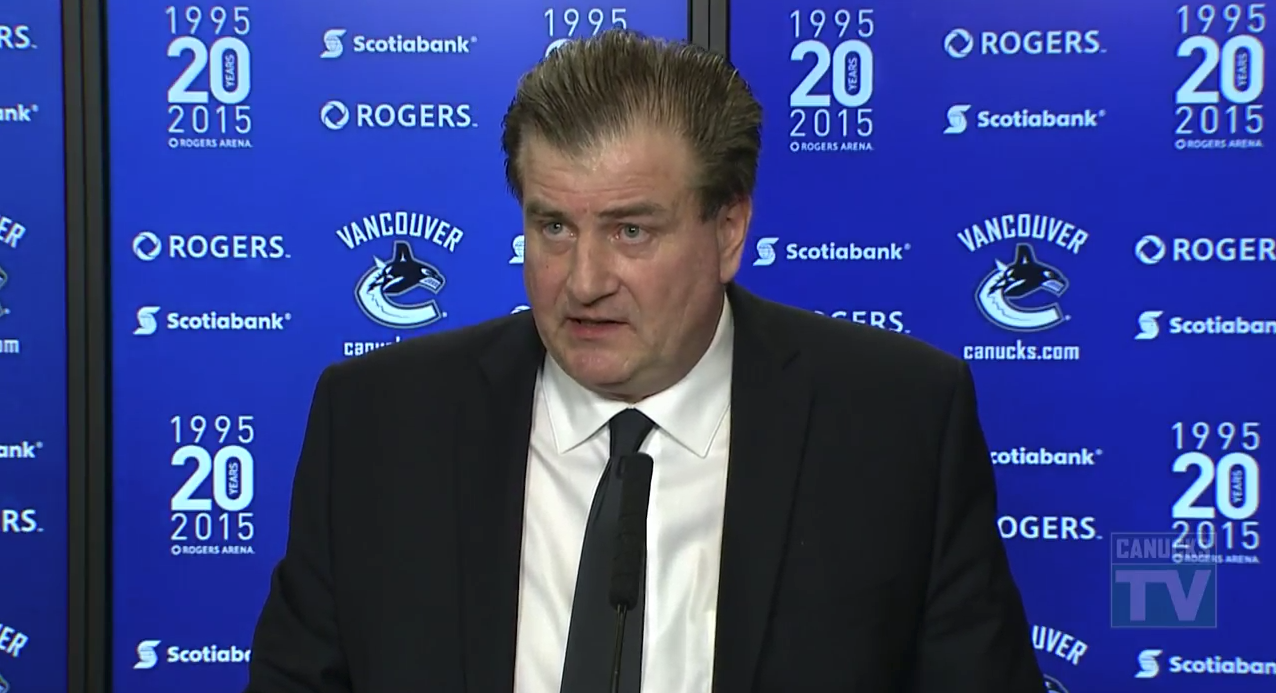 Instead of Benning being a GM who just couldn’t a deal done, the story turns into something more sinister. Now it turns into a story of an owner trying his hat on as GM of the team, with the optics of a strained business relationship with the Gaglardis on top of it.

We will probably never know the extent of the owners involvement with the team, and if it’s overblown or not. The point is, the stories are out there. That optics are firmly floating over the team. Not only that, you also have three seasons of the team refusing to do a rebuild in a city dying for hope. Several seasons where fans wanted to see change, but instead had to sit through “one last run” with a dying 2011 core.

That is why people in Vancouver reacted like they did to the deadline this year. It’s not just Jim Benning’s fault, it’s more of a result of the team’s actions since 2011. This isn’t simply a one-off situation. There has long been a feeling of unease about the direction of the team that has been increasingly hard to ignore as each season passes. You simply have to look at the Leafs pre-Shanahan to see an organization with similar qualities the Canucks are showcasing now. Odd contracts handed out, seemingly no obvious plan moving forward, possible power struggles in management…

It’s gotten to the point where a lot of the heat might be focused less on “Fire Jim Benning” but more on “Fire the Aquilinis”.

Of course, things can change in a heartbeat in hockey. Maybe the Canucks sign a big free agent in the off-season. Maybe Benning’s scouting comes through for the team and the re-build begins in earnest. Winning cures everything, and winning especially makes an owner’s actions off the ice far less interesting and villainous.

But for the rest of this season? Don’t be shocked if interest in the team hits an all-time low. Not just because Jim Benning couldn’t make a trade at the deadline. But because eventually you get just tired of falling down the stairs.