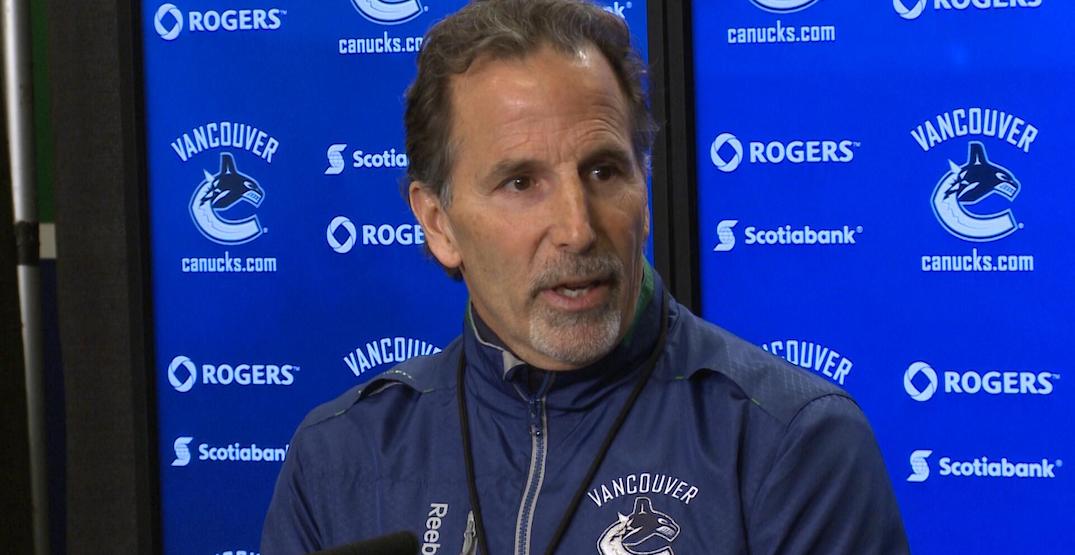 The stories about Tortorella from his lone season with the Canucks in 2013-14 are legendary. From trying to storm the Calgary Flames dressing room to fight Bob Hartley, to the commutes from Point Roberts and the infamous Murphy bed installed in his office — there’s no shortage of hilarious anecdotes involving Torts.

Tortorella had zero tolerance for being interrupted, which the media found out about right away during training camp. Someone’s phone went off in the media room at Rogers Arena, prompting Tortorella to say “That’s going to be a major league fine, I’ll tell ya. I’ll walk. If cellphones go off, I’ll walk.”

During his weekly hit with Mike Halford and Jason Brough on Sportsnet 650 this morning, Kevin Bieksa shared another legendary story about his former coach.

If you thought Tortorella didn’t like getting interrupted by a cellphone, how do you think he reacts when someone flushes a toilet while he’s speaking?

Tortorella liked to hold team meetings before practices, Bieksa recalled, and if they had played poorly the night before (which they did often that season), the coach would let the players hear about it.

“I would get the popcorn ready sometimes,” Bieksa said, recalling the anticipation of a Torts rant. “I would get nice and comfortable. I’m like ‘this is going to be entertaining.’ I’d sit back with my coffee and I’d watch him just rip on guys… It was so entertaining at times, if it wasn’t you.”

During one meeting, former Canucks defenceman Ryan Stanton found himself in a precarious situation. Injured at the time and thus not required to attend the meeting, Stanton was sitting on the toilet while Torts was in the middle of speaking to his team.

Stanton, who was a 24-year-old rookie at the time, made the mistake of letting the toilet flush within earshot of the dressing room.

“[Stanton] was in the washroom, on the toilet, taking a number two. He said he was sitting there for 15 minutes. He didn’t want to get up because he didn’t want the automatic sensor to go off.

“But he’s like ‘I’m sitting there for 15 minutes, like I gotta go, I’ve got to get out of here, I’ve got to go to the gym. My legs are sore from sitting so long.’ He tried to get up and sneak away. Automatic sensors go off. Torts runs back there and just lights him up. We’re all dying laughing in the room.”

Today on Halford & Brough, Kevin Bieksa recalled just how entertaining it was when Torts was the coach of the #Canucks 🔊@SadClubCommish @MikeHalford604 pic.twitter.com/RyfMsCs3Z6

And that was the PG version. Bieksa later explained what Tortorella said when he confronted Stanton.

“I’ll tell you what he really said,” Bieksa said. “He runs back there and he goes ‘Stants! What the heck are you doing, pinching one off?’ We’re dying laughing and [Tortorella] comes back in [the dressing room], and he’s kind of half laughing because he’s half pissed off, he’s like ‘Stants is back there pinching one off!'”

A week later, the toilet flushed mid-meeting again, and Torts stormed back to the washroom only to find Henrik Sedin’s son Walter. Tortorella apologized.

Tortorella had a famous rant about Twitter during his tenure in Vancouver.

“There better be no information coming out of the locker room with that damn Twitter. It’s nothing but trouble,” Tortorella said at the time.

The former Canucks coach conceded that Twitter was good for charity work, which he used for a dog walk in New York that raised a lot of money, but that’s about it.

“It’s not for [posting]: ‘Here I am. I’m having a roast beef sandwich. I’m saying hello to my fans.’

Tortorella also wasn’t a fan of email, it seems.

Bieksa said instead of emailing the team schedule to players, Tortorella used to put up a hard copy of it at the Westin Bayshore hotel in downtown Vancouver.

“Everyone had to go to the Westin Bayshore lobby to see what the schedule was. Like, physically guys had to drive there,” Bieksa said. “I lived close to there, so I would go and take a picture and text it to the twins and Kes, Hamhuis, and all the guys with kids. It was hilarious.”

Despite the lack of success the team had, Bieksa said he liked having Tortorella as a coach.

“He had some quirky views, but honestly, he was an awesome coach.”