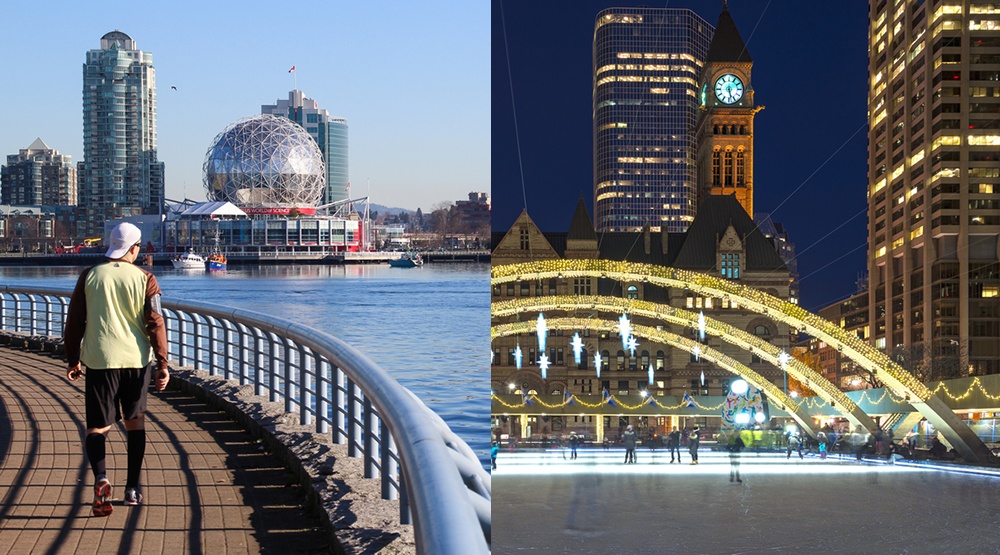 Two major Canadian cities have some of the world’s top startup ecosystems, according to a new report by Startup Genome, a non-profit that collected data on startup activity and conducted over 11,000 interviews with startup founders in 55 different startup ecosystems.

In its latest report, Vancouver and Toronto rank 15th and 16th, respectively – just behind Austin and Stockholm but ahead of Sydney and Chicago. Both Canadian cities scored particularly well in the market reach category, ranking 5th and 7th in the area ahead of Stockholm, Boston, and Shanghai.

“Canadian cities score particularly well on Market Reach, driven by the high share of foreign customers that startups in Toronto-Waterloo, Vancouver, and Ottawa are able to reach,” reads the report. “This is largely because of Canadian startups’ access to the U.S. market – when we remove that from Market Reach calculations, Toronto-Waterloo and Vancouver both rank below the 10th position.”

“American cities in the top 20 scored well over on Talent, except Los Angeles and Chicago where startups have a difficult time hiring experienced engineers and growth talent,” the report continues. “Vancouver, Paris, Stockholm, and Toronto-Waterloo ranked towards the bottom of the top 20s as well due to similar Access issues, despite their much lower engineering salaries.”

With between 800 and 1,100 startups, Startup Genome says Vancouver has more startups per capita than any other city in the country. While Vancouver has the fewest number of startups in the top 20 list, its startup valuations are highly competitive and its funding metrics are steady with an average early-stage funding per startup of $334,000, above the global average of $252,000. Vancouver’s startup ecosystem is worth a combined $9 billion.

“The performance factor, including its three sub-factors, is the main part of the ranking that favours large ecosystems, but it does so to a lesser degree than in the past,” states the report. “Accordingly Vancouver, a successful ecosystem in a small city, ranked low across the three sub-factors.”

While Vancouver ranks 15th for startup experience, it topped the list for the category’s sub-factor of team experience. It also has the 2nd highest percentage of foreign customers outside of the country at 57%.

However, the city ranks poorly in funding and performance – second last in both categories for the top 20 cities.

Toronto and Waterloo were previously evaluated separately in Startup Genome’s past rankings, but in the 2017 ranking both areas were merged together as “there have been strong signals that the region is increasingly behaving as one ecosystem.”

There are between 2,100 and 2,700 startups in the Toronto-Waterloo region, due to “world-class engineering talent, strong entrepreneurial culture, an affordable rental market rate, and a global base of customers.” It has the second highest density of startups in the world and is the headquarters of some of Canada’s largest tech companies.

“The primary reason startups move to Toronto-Waterloo is because it’s easier to find good technical employees,” reads the report. “The only other ecosystem where that was the strongest reason for moving there is Bangalore.”

Local post-secondary institutions, particularly the University of Toronto and University of Waterloo, plus generous tax credits, government grants, and a favourable currency exchange are also major drivers for this ecosystem.

This ecosystem has a value of $7.2 billion, and the average early-stage funding per startup hovers at $443,000.

Nearly one-in-five founders are female and close to one quarter have an immigrant background.