The Toronto Raptors have announced their schedule for the first half of 2020-21, with Amalie Arena in Tampa, Florida, serving as their home arena.

The Raptors will tip off their 26th NBA season on Wednesday, December 23, 2020, when they host the New Orleans Pelicans in Tampa.

This will be the 11th time in the past 12 seasons that the team has started their regular season at home.

The team’s first away game is set for December 26, when they head to San Antonio to face the Spurs.

The longest stretch of home games for the Raptors will be five games from January 14 to 22. The longest road trip for the team will be six games from February 2 to 12.

Seven games in the first half’s schedule will be broadcast on national television in the US. Three will be featured on NBATV, and two each will be played on ESPN and TNT. The Raptors’ local TV schedule will be released at a later date.

In an effort to limit the potential spread of COVID-19, the NBA has taken steps to reduce teams’ travel, including the use of a “series” model. In addition, single-game road trips have been cut by roughly 50%.

Under the series model, if a team is set to play twice in one market, games will be scheduled so that they’re played consecutively. The Raptors will play five back-to-back “series” in the first half of the season.

More than 52% of all regular-season games have been scheduled for the first half, with each NBA team set to play 37 or 38 games. 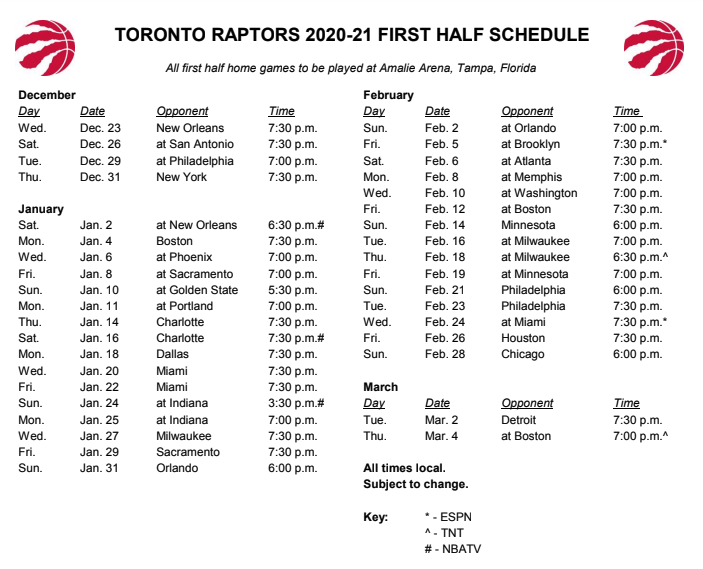