Maybe let the Toronto Raptors soak this one up a bit before looking forward to next year, huh Washington?

According to a  Woj Bomb from ESPN’s Adrian Wojnarowski, the Washington Wizards are reportedly preparing to offer Masai Ujiri, the architect of the newest NBA champs, a prolific contract that could pay him upwards of $10 million per year.

The deal would also include “the opportunity for ownership equity,” as per Wojnarowski.

The Wizards apparently don’t want to waste any time, with plans to reach out to the Raptors president “soon.”

ESPN Sources: The Washington Wizards are preparing to make a prolific offer to Toronto’s championship architect Masai Ujiri — as much as $10M annually — to run its basketball operations. https://t.co/KQf18YUkLN

Ujiri was the catalyst in rebuilding the Raptors, using his vision to help deliver Toronto’s first-ever NBA title by defeating the two-time defending Golden State Warriors on Thursday night.

Ujiri became Toronto Raptors general manager in 2013. In 2016 he was promoted to team president and is currently under contract until 2021.

He’s responsible for turning around the Denver Nuggets franchise and now, with an NBA championship under his belt, his reputation will shine even brighter. 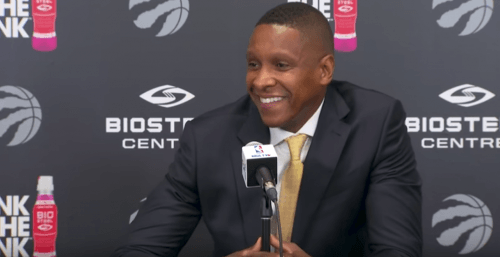 Along with juggling a reported offer from the Wizards, the 48-year-old Ujiri will need to navigate an attempt to sign NBA Finals MVP Kawhi Leonard to a long-term deal.

ESPN reported that the Wizards have also checked in on Oklahoma City executive Troy Weaver,  and former Atlanta and Cleveland GM Danny Ferry.