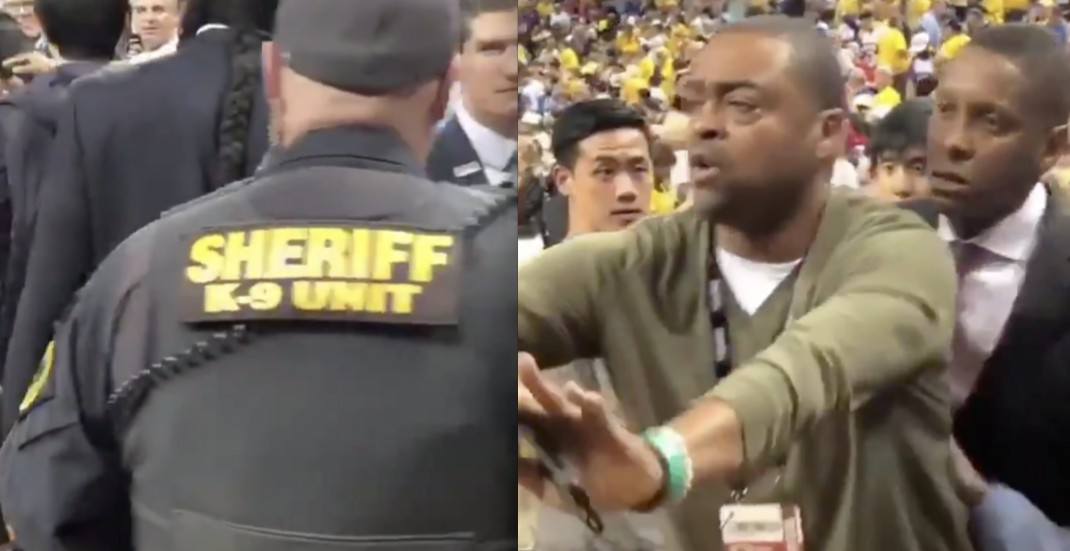 The Alameda County Sheriff’s Office says the officer who stopped Toronto Raptors President Masai Ujiri from entering the court following the team’s championship win was “doing his job” and race was not a factor.

The incident, which some are calling out as an example of police racism and carding, took place at Oracle Arena just moments after Toronto defeated the Golden State Warriors to win the NBA Championship on Thursday, June 13.

Ujiri had credentials but not the right ones

Kelly said that there are a number of credentials needed at games. Arena staff, law enforcement, vendors, special guests, and owners were all required to have specific identification and credentials during the NBA Finals.

“If you’re part of any one of those groups you’re directed to wear the NBA 2019 game day credentials,” said Kelly. He explained that these credentials were red in colour and they had the photograph of the recipient affixed to the front. These credentials were in effect before the game and until the final buzzer sounds.

“Game 6 was a title clinch for the Raptors and there was a protocol in place to get on the court… you had to have two specific credentials. One was a gold armband that was supposed to be worn on the outside of your arm in the upper portion of your arm. And then with that credential, there was a followup purple trophy credential,” said Kelly.

“If you did not have the purple trophy credential and the yellow armband credential you could not go on the court for the trophy ceremony.”

Video on social media shows Ujiri holding a lanyard in his hand with what appears to be the red credential moments before the Raptors won the championship.

Video shows Raptors President Masai Ujiri had credentials in hand on his way to the court pic.twitter.com/AnoLXcXHo7

Kelly says “there are narratives out there saying that Mr. Ujriri had the credentials for Game 6. That’s true but then it’s also not true because he did not have the post-game credentials.”

Altercation on the court

According to Kelly, Ujiri attempted to enter the court following the final buzzer. He was stopped by the deputy who asked him for his credentials.

“That’s when the incident started,” he said.

Ujiri allegedly pushed passed the deputy who then pushed him back and “guided” him away from the court.

Kelly says Ujiri then presented credentials that were “not the trophy credentials” which he “put in [the] deputy’s face” in an “aggressive manner.”

“Then Mr. Ujiri then tried to get back on the court and that’s when our deputy then for a second time engaged [him] and guided him away from the court.”

Following this, a man in a green shirt approaches the officer. This particular individual was seen in many social media videos.

#BREAKING: Sheriff’s deputy reportedly pushed and struck in the face by a man believed to be a Toronto Raptors executive after Game 6 of the #NBAFinals at Oracle Arena, @ACSOSheriffs says. https://t.co/fobdK9iWEq pic.twitter.com/a4X0IysY5Z

Kelly claims that at one point the man in green grabbed the deputy on the left side of his body and during this time Ujiri allegedly struck the officer “in the face with a closed fist.”

“His right hand struck our deputy the left side jaw with a closed fist similar to a punch.”

At approximately the same time the punch landed, Kelly says the man in the green switched off the officer’s body camera “because the body camera has a switch on top.”

However, Ujiri allegedly making physical contact with the officer is not seen in videos posted on social media. Nor is footage of the man in the green allegedly grabbing the deputy.

Kelly says that the incident was recorded in “high definition from three separate angles” on arena security cameras as well as the body camera.

“There is a misconception out there that the body cam was turned off. The body camera captured all of the incidents up to the blow, including the blow. I want to be clear in the fact that the area security video… from three separate angels covered the incident from start to finish and thereafter.”

At least one witness account tells the story differently. Warriors’ season ticket holder Greg Wiener was standing about “a foot and a half”  from the altercation.

Wiener told Daily Hive that he did not see Ujiri punch or strike the deputy but did witness a “shove to the chest.” Wiener also confirmed that the deputy put his hands on Ujiri.

“I have consistently reported from the morning of the event that first, the deputy had attempted physically to restrain Mr. Ujiri from entering the court…you know somebody puts your hand out on your chest you just kind of use your other hand to brush it off,” he said.

“That’s what Mr. Ujiri did. The Deputy then again tried to restrain him, maybe giving him a little bit of a shove at that moment and then Mr. Ujjiri shoved him hard with two hands in the chest.

When asked if the deputy put his hands on Ujiri, Kelly doesn’t deny this.

“Look, you can call it pushing, shoving whatever you want. But the deputy was doing exactly what he was supposed to and that is keep uncredentialed people off of the basketball court.

“Mr. Ujiri was not going to stop and have a conversation with our deputy it was apparent.

“Even a conversation would have helped alleviate all of this stuff that happened after the fact.”

Kelly denies race played any factor in the deputy asking for credentials.

“[A]nytime we do our job and an officer appears to be Caucasian, the issue of race and carding and race bias comes into play,” said Kelly.

“Nobody there carded or did a racial bias against Mr. Ujiri… Obviously, we knew was a person of some significance there. It’s just that we didn’t know who he was.”

He went on to say that the accusations of racial bias are “upsetting” and “hurtful.”

“We in law enforcement are used to that low-blow tactic that’s often used against us and it couldn’t be further from the truth.”

The Oakland Police Department and the Alameda Country Sheriff’s Office are still investigating the altercation.

The deputy — who remains off duty — has hired high profile civil rights attorney David Mastagni to possibly file a lawsuit against Ujiri, the Toronto Raptors organization, and the NBA.

Nancy O’Malley, District Attorney for Alameda County, will announce if charges will be laid.

In a previous statement, the Raptors said they are “fully cooperating with authorities” and “look forward to resolving the situation.”

Daily Hive reached out to the Raptors for further comment regarding Kelly’s accounts of the incident.

Phil Summers, manager of communications for the team, said they “had no further comment other than [their] original statement.”