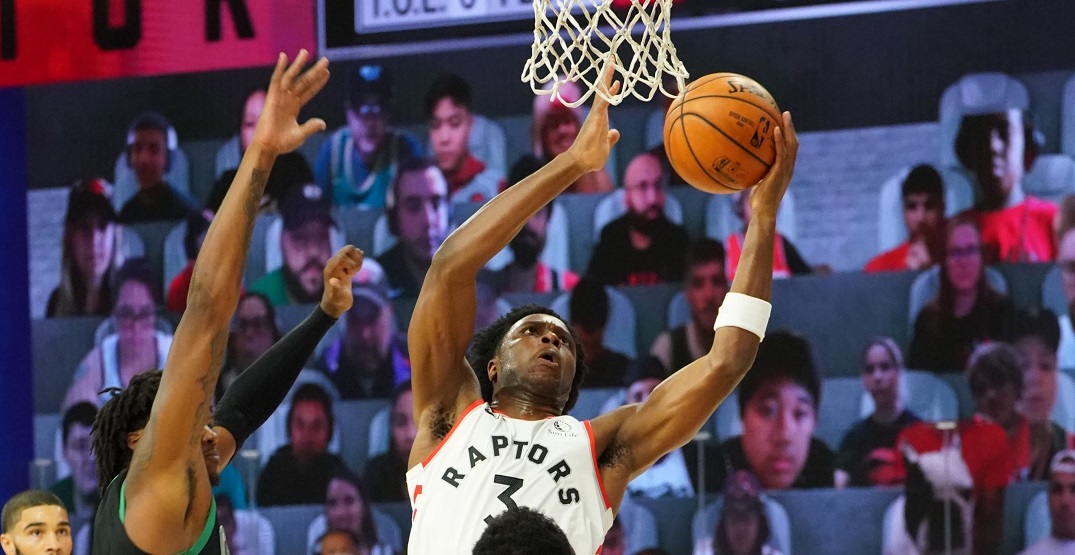 After the Toronto Raptors headed into the fourth quarter of Tuesday’s Game 2 with a 78-70 lead over the Boston Celtics, they were unable to close the door as they suffered a 102-99 defeat.

The Raptors now find themselves down 2-0 in the best-of-seven second round series.

Including the regular season, the Raptors have now been beaten by the Celtics in five of their six contests this season.

While the Raptors did come back from that familiar 2-0 deficit in last year’s Eastern Conference Finals against the Milwaukee Bucks, the uncomfortable but clear lack of a true superstar like they had in that series in Kawhi Leonard never has felt more apparent.

Refereeing decisions, in both directions, were largely crucial to the outcome.

Toronto didn’t have a free throw during the entire first half, while Boston had nine. The FT count ended 23-12 in favour of Boston.

Nurse on Tatum: "He shoots 14 free throws which is as many as our whole team shoots." Then says he can't comment on quality of the whistle on follow-up.

Meanwhile, the Raptors’ final possession of an inbound ended when Pascal Siakam was ruled to have stepped out of bounds while setting up for a potential game-tying three-point attempt. After a Boston miss on their final possession, Fred VanVleet’s final long range effort came up short as time expired.

A final roll of the dice falls short for the Raptors.

The Celtics take a 2-0 series lead and the champions are in trouble. pic.twitter.com/e8h8bqexVB

In the final minute of the first half, Boston’s Jaylen Brown appeared to be well over the out-of-bounds line on a play that led to a fast-break bucket for the Celtics.

It isn’t much, but in a one-possesion game, every missed call can be crucial and it’s clear this loss hurts a little more than most.

Late in the third quarter, Marcus Smart fouled Pascal Siakam on a fast-break play that was initially called the other way, nullifying the lay-up from VanVleet.

After Siakam converted his free-throw attempt given because of Smart’s foul, the Raptors a 12 point lead, their largest of the game. But a series of missed shots, untimely turnovers and Boston converting on their chances saw Toronto quickly chasing the game almost as quickly as it looked like they were in control.

If there is any consoloation for VanVleet and the Raptors, it’s the opportunity to play in front of their families, who were recently allowed to enter the NBA’s bubble. VanVleet’s daughter is pictured below.

Jayson Tatum led the Celtics with 34 points, while OG Anunoby came through with a playoff career-high of 20 points to set the pace for the Raptors.

In the first half, much was made of a struggling Celtic point guard Kemba Walker, who didn’t make a field goal through the first two quarters as he shot 0-8 in the first half, including 0-5 from three-point range. But like Smart, he found his stroke, finishing 6-18 with 17 points on the night. It wasn’t a pretty performance, but it was good enough to beat a Toronto team that’s struggled with Boston all season long.

Much of Toronto’s bench also was a non-factor their mostly-limited minutes. Serge Ibaka did contribute 17 points in his 27 minutes, but Norm Powell (4 in 13 minutes), Chris Boucher (0 in 9) and Terence Davis (0 in 6) were afterthoughts on the night.

Looking ahead to turning things around, the Raptors’ key concern has to be finding ways to manufacture a stronger performance from Siakam on the offensive end of the floor. After being Toronto’s leading scorer in the regular season, his point totals of 13 (Game 1) and 17 points (Tuesday) through the Raptors’ first real playoff test this year have been underwhelming, to say the least.

Lowry on Siakam: "We just tell him our confidence is in him. We know how good he can be and how dominant of a basketball player he can be. He has to figure it out and make some shots. If he makes some shots it's a different game. It happens sometimes."