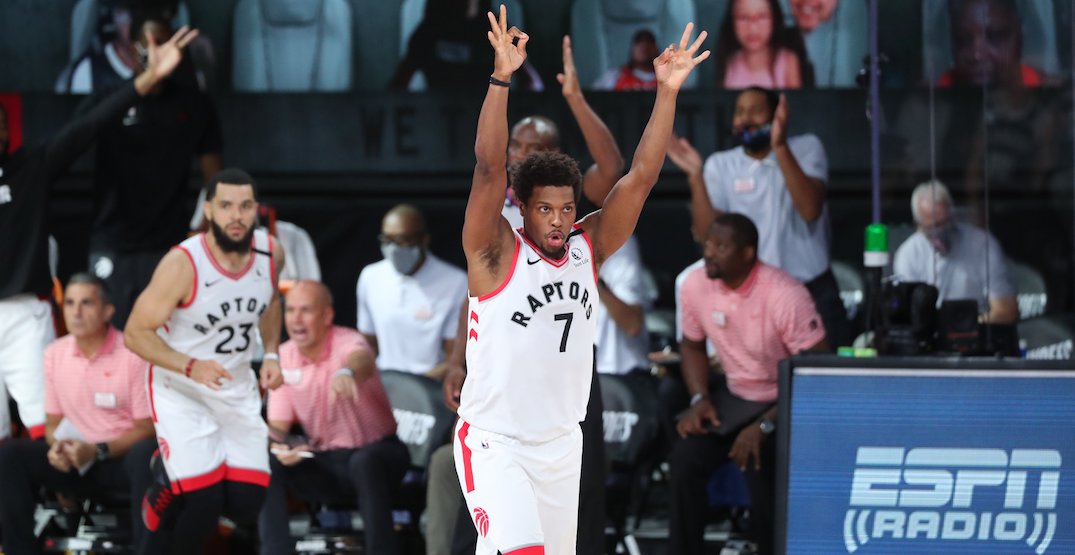 The defending NBA champions made a statement in their postseason opener on Monday afternoon.

The Toronto Raptors began their title defence with a dominant 134-110 win over the Brooklyn Nets in Game 1.

Kyle Lowry helped Toronto get off to a hot start.

Yo @Eagles, when are try-outs?

Toronto rode some strong three-point shooting and tough defence to a 37-20 lead after the first quarter.

In the second, Fred VanVleet got hot and helped the Raps keep pouring it on from three-point range.

The Raptors went 7-1 in their regular season games in the bubble, though there was some concern about the offence heading into the playoffs.

Well, on Monday against the Nets they took a 73-51 lead into halftime. The 73 points where three short of the franchise postseason record for most points in a half.

To the Nets’ credit, they didn’t roll over after getting dominated in the first half. Brooklyn came out in the third quarter looking determined to make this a game, and even managed to trim Toronto’s lead to nine points heading into the fourth quarter.

In the fourth quarter, though, VanVleet decided that the Nets had gotten close enough.

VanVleet just continues to impress and seems to continue getting better. He was Toronto’s best player in the series opener, shooting an incredible 8-for-10 from three-point range while scoring a game-high 30 points and adding 11 assists for a double-double.

OG Anunoby also got in on the fun in the fourth. He somehow grabbed an offensive rebound while surrounded by several Brooklyn players, then spun away and drove the ball to the net, putting it home while getting fouled to set up a three-point play.

Toronto pulled away in the fourth quarter, outscoring Brooklyn 39-24 to secure the win.

The Raptors had notoriously struggled in series openers. In the 13 playoff series they’d played in from 2014-2019, their record in Game 1 was 3-10.

The Nets were a below .500 team in the regular season that finished 18 games behind Toronto. They made a coaching change in March shortly before play was suspended. Several of Brooklyn’s top players, such as Kyrie Irving, Spencer Dinwiddie, DeAndre Jordan and Taurean Prince aren’t even playing. The Nets had to scramble to sign a bunch of veteran free agents before play restarted just to fill out their roster.

In other words, this is a series the Raptors should win easily. Even after winning a championship last year, some Raptors fans still have scars from previous postseasons and weren’t convinced they would make things easy even against a team like the Nets.

One thing’s clear, though: these aren’t the “same old Raptors.”