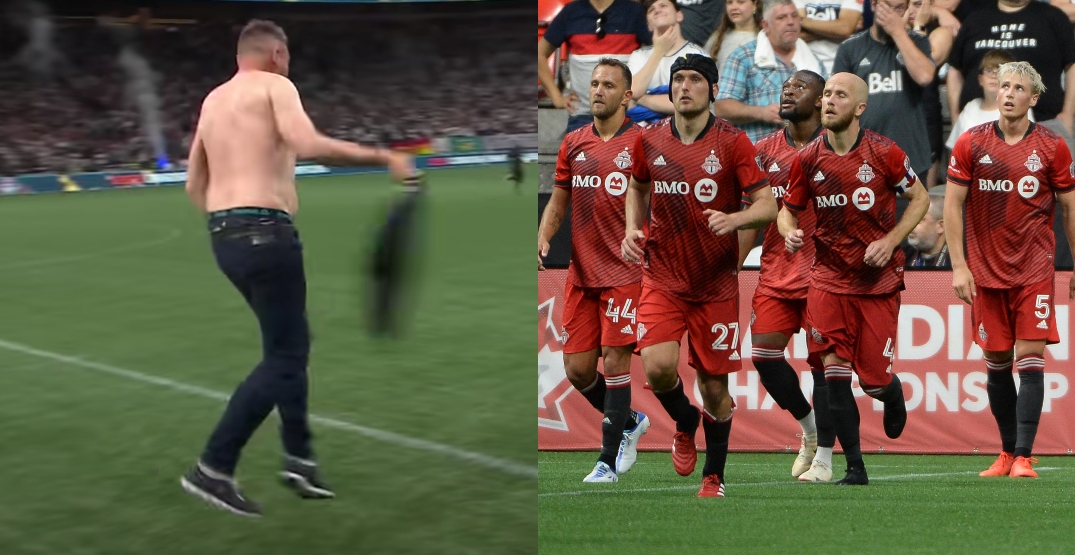 It seems Vanni Sartini’s demonstrative celebration had Toronto FC players pouting on their way back to the centre of the universe.

The charismatic Vancouver Whitecaps FC head coach was jubilant in victory, even removing his shirt after Tristan Blackmon scored in a shootout to clinch the Canadian Championship at BC Place on Tuesday.

Following the celebration, some Toronto FC players refused to shake hands with Sartini.

The Whitecaps coach, according to local soccer reporter Manuel Veth, responded by saying “it is okay to lose sometimes” in Italian to the TFC players.

I was told he wanted to go over to shake hands with Bradley but he refused and then said: “it is ok to lose sometimes” in Italian, which the Italian players didn’t like.

Neither Toronto FC head coach Bob Bradley, nor his players, were made available for media after the match — still salty apparently from what happened.

The Toronto Sun newspaper seemed a bit salty, too, referring to Sartini’s celebration as a “clown show.”

On Thursday, Bradley finally spoke about the incident.

“Vanni chose to celebrate in his own style,” Bradley told reporters in Toronto. “In the process, when he’s waving his shirt, he’s waving his shirt at one point right in front of [Jonathan Osorio]. Oso just missed a penalty in a shootout. And so, when he’s done celebrating, and then he then wants to come over and start again, yes, there were guys on our team that in that moment just absolutely did not want him over on our side. When I saw that, I know Vanni, and in a simple, straight way, I said: ‘When you celebrate like that, right now they don’t want you over there.'”

A day earlier, in an interview with Mike Halford and Jason Brough on Sportsnet 650, Sartini said some of Toronto’s players were “pissed.”

“I talked to Bradley after the match, to Bob, we were just exchanging congratulations and that’s it. Players, to be honest, were quite pissed. Some of them didn’t want to shake hands with us, maybe they expected to win and they didn’t win. But to be honest, Bob was a really good sport and congratulated me and the team,” said Sartini.

Sartini was then asked if there was another reason why they were mad.

“You have to ask them. I don’t know and between me and you, I don’t care.”

The real shame here is that the Whitecaps and TFC don’t play again until next season, because this rivalry is just getting interesting.

“He twisted his words when he made it seem like guys didn’t want to shake hands cause they were mad at the loss,” said Bradley. “Sure, disappointed for sure, but he didn’t take any personal responsibility.

“Everyone can celebrate any way they want, there’s no discussion of that. But if before you come over to shake hands, you take your shirt off and you’re waving it right in front of guys on our team, yeah look, losing a shootout, missing a penalty in that moment, those are things that stick with you.”