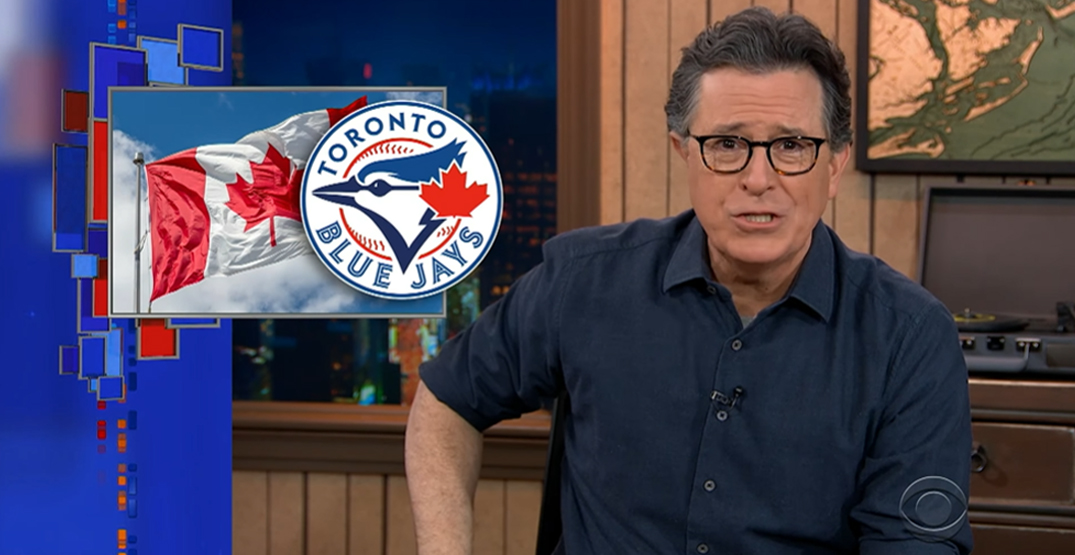 With football season in the rearview mirror, the countdown to baseball season has officially begun. As Toronto Blue Jays fans eagerly anticipate the start of the 2021 campaign, one particular late night host dropped a random reference to “Canada’s team.”

Last week during an episode of “The Late Show,” while going off on a bizarre tangent about the quality of pizza in Connecticut, Stephen Colbert launched into a rant about Canadians co-opting America’s beloved pastime.

“It’s like Canada declaring baseball its national pastime because they have one baseball team,” Colbert said. “Stick to hockey, you moose-fondling, poutine junkies!”

In fairness, Colbert quickly realized the error of his ways and immediately apologized for dragging Canada into his war on Connecticut pizza.

“Sorry, you didn’t deserve that,” Colbert said. “I don’t know how you got pulled into this story. I suppose it’s because Connecticut is New York’s Canada.”

Baseball was founded on American soil, but there are plenty of Canuck connections to baseball. Babe Ruth hit his first professional home run in Canada. Canada is home to the oldest ballpark in the world (Labatt Park in London, Ontario), and there are two Canadians in the Baseball Hall of Fame (Larry Walker and Fergie Jenkins).

Interestingly enough, this isn’t the first time Colbert worked Canada’s beloved gravy and cheese curd concoction into a punchline. Back in 2012 on The Colbert Report, the comedian referred to Canadians as “poutine-sucking, health care addicted neighbours to the north.”

Meanwhile, the Blue Jays gear up to start spring training in just over one week, as pitchers and catchers report on February 17 in Dunedin, Florida, with their first spring training game on target for February 27.

BASEBALL IS ON DECK!!! pic.twitter.com/OqIIyhJydE

With the NFL season on ice, the Blue Jays are clearly excited to get back to business and show off some of their newly minted acquisitions like George Springer and Marcus Semien.