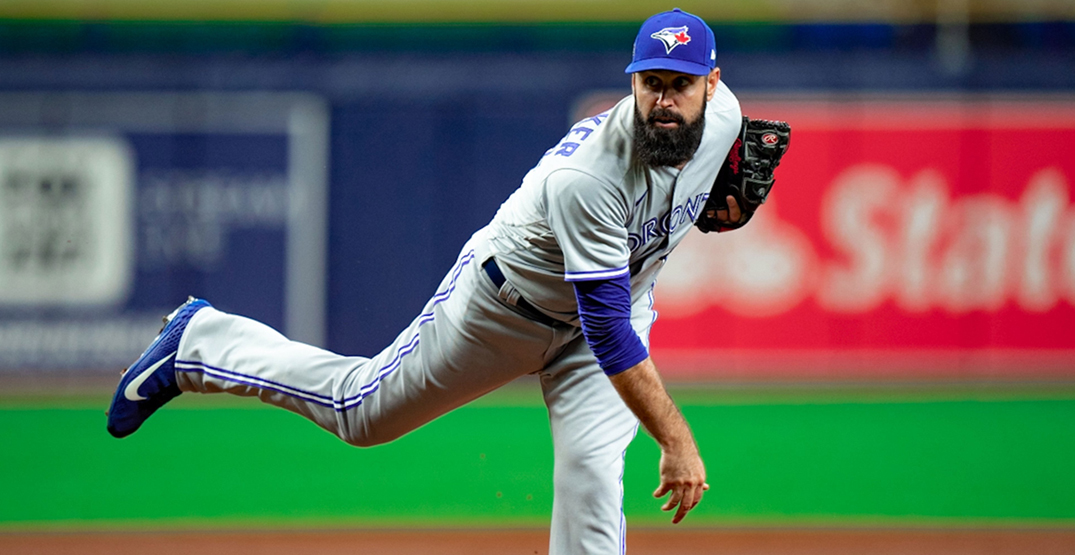 The Toronto Blue Jays are down, but they’re not out yet. Any other year, a Wild Card loss would send a team home, but the Blue Jays are still alive after they lost their Wild Card series opener 3-1 to the Tampa Bay Rays.

It was a nail-biter from start to finish as both the Blue Jays and Rays combined to collect nine hits total, as superb pitching was the difference-maker in Game 1.

Tampa Bay went into this series with one of the best pitching staffs in baseball, and they lived up to the hype. It took eight innings for the Blue Jays to get on the scoreboard, but by then, the Rays pitchers snuffed out all but one rally the Blue Jays put together.

Matt Shoemaker was a bit of an unorthodox choice to take the ball in Game 1 for the Blue Jays, but he was lights out, throwing three scoreless innings to start the game. Shoemaker was efficient as could be, throwing 27 of 35 strikes, while striking out two batters.

Started this one off on the right foot 👞@MattShoe52 went 3 scoreless! pic.twitter.com/CHfB9QzDZ0

The Rays opened the scoring in the bottom of the fourth inning after Randy Arozarena hit a leadoff triple, and he scored on a wild pitch that snuck through the legs of Danny Jansen.

Rays on the board pic.twitter.com/aQYKFUXRfv

Rays starter Blake Snell dealt through the first five innings, as he carried a no-hitter into the sixth inning until the no-no was broken up by 21-year-old rookie Alejandro Kirk with an opposite field single.

Kirk became the second-youngest DH in history to start a postseason game.

Beam me up, Captain Kirk! pic.twitter.com/JvGWTJUqQs

Snell struck out 9 Blue Jays hitters over 5.2 innings of work, setting a franchise postseason record for most strikeouts in a playoff game by a Tampa Bay Rays pitcher

On the Blue Jays’ side, left-hander Robbie Ray took the baton from Shoemaker in the fourth inning. Despite allowing the Rays to score straight out of the gate, Ray promptly shut down Tampa Bay and struck out five hitters over three innings of work.

Shoemaker and Ray came into the game as piggyback pitchers, throwing from both sides of the mound and holding the Rays offense to merely one run on three hits through the first six innings of the game.

For a starter pitching in only his second game after returning from the injured list, and another who led baseball in walks this season, those results were best-case scenario for the Blue Jays.

Once the Jays got into the Rays bullpen, they put consecutive batters on base in the seventh after Vladimir Guerrero Jr. reached base via a hit by pitch and Lourdes Gurriel Jr. followed that up with a single to left field.

The Blue Jays went to their bench and called upon Joe Panik as a pinch hitter with runners on first and second, but he hit a ball straight up the middle, right into the Rays’ defensive alignment.

The Rays came back with a two-run home run from right fielder Manuel Margot off A.J. Cole, which put Tampa Bay ahead 3-0 in the bottom of the seventh.

The Blue Jays’ bats finally came alive in the eighth after Rowdy Tellez and Cavan Biggio strung together consecutive hits, and Bo Bichette drove home Tellez on a sacrifice fly for Toronto’s first run of the game.

Toronto threatened again in the ninth inning, bringing the tying run to the plate against Rays’ fireballer Pete Fairbanks. Gurriel connected fdoubleuble, which was his second hit of the game against the Rays.

Despite the late game dramatics, the Rays clung to a 3-1 lead and secured the win in Game 1 of the series.

With their season on the line, the Blue Jays will entrust their ace Hyun-Jin Ryu to keep them alive in the playoffs, hoping to push the series to a third and deciding game.

The Blue Jays and Rays play Game 2 at Tropicana Field starting at 4:00pm EST. Lose and the Blue Jays go home, but win, and they live to fight another day on Thursday.