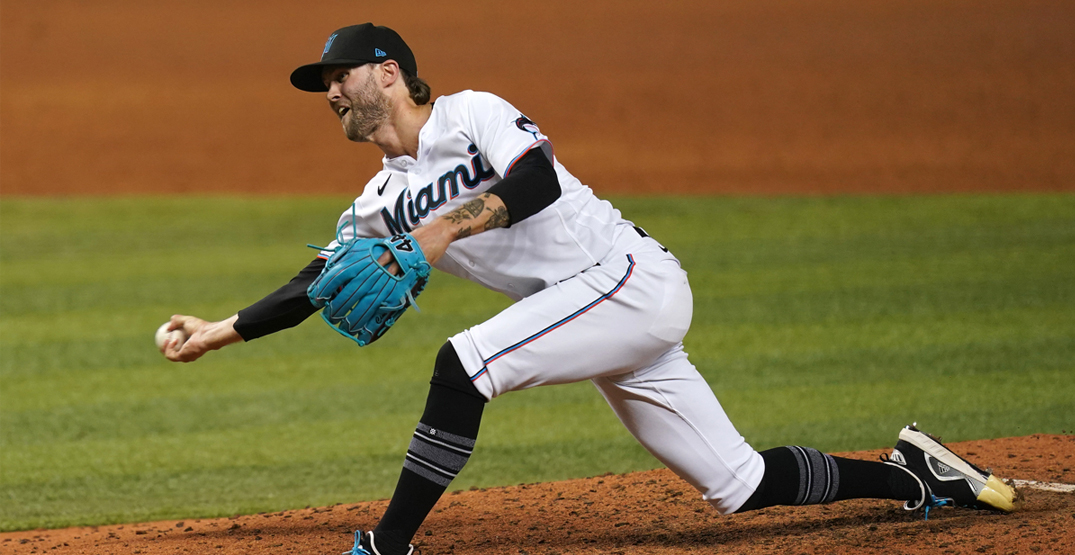 It’s been a wild ride for the Toronto Blue Jays’ bullpen this season, but they just got some sorely needed help for their relief core.

He isn’t a big strikeout pitcher, but Cimber doesn’t walk very many batters and his submarine delivery is a nightmare to face for right-handed hitters. His unorthodox release point is unlike any other Blue Jays reliever, that’s for sure.

Adam Cimber brings a different look, to say the least.

Here's his 2021 release points vs. those of every Blue Jays pitcher. pic.twitter.com/302619uEQt

The 30-year-old is also a soft contact savant, posting the sixth-highest soft contact rate among all MLB relievers this season at 28.2%. Batters don’t have any issue with putting the ball in play, but Cimber’s delivery helps limit damage.

Cimber also keeps the ball in the ballpark, having yet to surrender a home run this season. He’s one of only 11 qualified relievers who haven’t given up a home run in 2021, with fellow Blue Jay Jordan Romano also on that list.

Cimber isn’t merely a band-aid solution for the Blue Jays’ bullpen either, as he’s under control through the 2024 season. Relievers are often volatile pieces, but Toronto’s front office has a mid-to-late relief option for the next three-plus seasons if they so choose.

Dickerson is more or less a salary dump by the Marlins, as the 32-year-old outfielder is on the final year of his $17.5 million deal with Miami. He’s currently on the injured list with no timetable for a return, so the Blue Jays are eating Dickerson’s salary to level things out.

If by some miracle Dickerson comes off the IL at some point this season, he’s a nice left-handed power-hitting option on the bench for the Blue Jays. When healthy, Dickerson might split time in left field with Lourdes Gurriel Jr.

Dickerson’s arrival onto the roster doesn’t spell doom for any of the Blue Jays outfielders, he’s merely a bench bat or late game defensive replacement in the outfield when he’s healthy.

This is a tidy little trade for the Blue Jays, who give up Panik (a free agent at the end of the season), and McInvale, a 37th round draft pick. The Blue Jays might miss Panik’s versatility on the infield, but his bat is easily replaceable.

It’s surely the next of several more moves in the coming weeks for the Blue Jays. They started rehabilitating their bullpen by bringing in Jacob Barnes from the New York Mets and signing Canadian John Axford to a minor league deal.

Two key cogs of the Blue Jays’ bullpen could return after the All-Star break as well. Both Ryan Borucki and Julian Merryweather have been throwing bullpens and side sessions as of late, with rehab stints on the horizon for both relievers.

In the meantime, Blue Jays manager Charlie Montoyo suddenly has one more arm he can trust in the bullpen with the acquisition of Cimber.