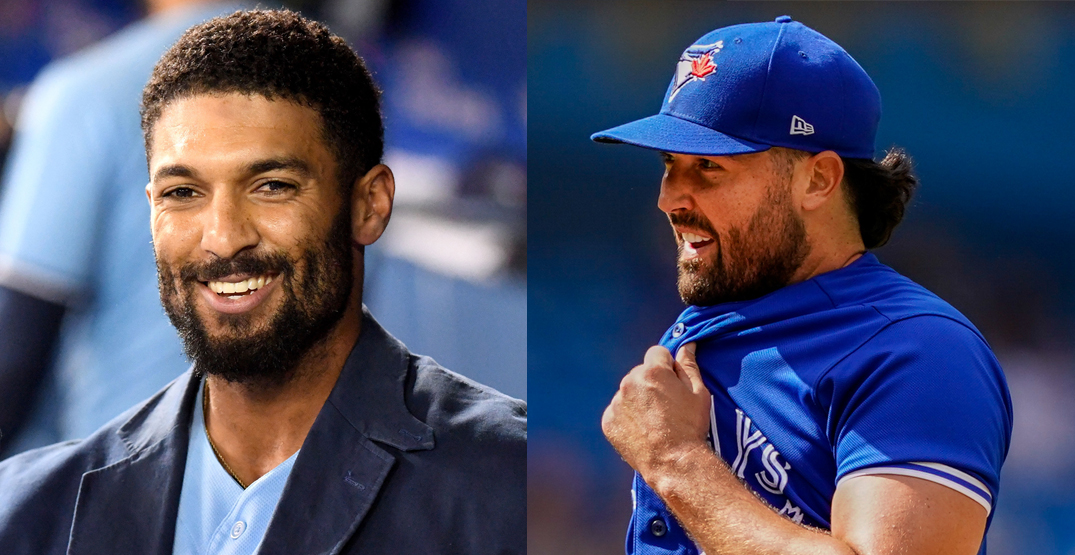 Marcus Semien and Robbie Ray walk into an underground poker game. “Pay those men their money,” a Russian mobster says, for some odd reason.

Semien and Ray are going to get paid this offseason. Whether that’s by the Blue Jays or one of the other 29 teams remains to be seen, but as of this moment, Toronto still has a window to re-sign who of their most productive players from the 2021 season.

With a 2022 payroll which figures to shoot north of $100 million, the Blue Jays’ salary floor will only increase next season. It seems unlikely there’s room for two high-ticket free agent signings like Semien and Ray, so a realistic scenario is one player returns, not both.

In actuality, the Blue Jays have room for one big bullet in their free agent chamber this winter, and they could shop at the top of the market for a marquee starting pitcher, or they could add to their already potent lineup.

Given their bodies of work in 2020, the Blue Jays have a wealth of scouting intel on Semien and Ray, meaning the team knows what they’re getting when they table a potential offer to either of these players.

So if the club can’t bring back both, and they had their choice of Semien or Ray, which would be the ideal fit moving forward?

The case for Robbie Ray

The Blue Jays picked up Ray off the scrap heap at the 2020 trade deadline and signed him back to a one year $8 million deal for 2021. Then, under the tutelage of the Blue Jays, Ray had one of the most dramatic one-year turnarounds in recent memory for a starting pitcher.

He turned in one of the most impressive seasons by a Blue Jays pitcher in franchise history, and likely pitched his way towards an AL Cy Young Award. That kind of turnaround has him poised for huge payday on the free agent market.

Not only did he set career highs, but he led the AL in ERA, strikeouts, innings pitched and games started. Despite his up-and-down career, Ray couldn’t have picked a better time to maximize his earning potential.

The 30-year-old can look at recent deals for starting pitchers as a baseline; Hyun-Jin Ryu’s four-year $80 million deal from the Blue Jays, and Zack Wheeler’s five-year $118 million deal with the Phillies.

“I felt like I was finally doing what I was capable of,” Ray said. “Everybody always talked about: ‘Would it ever come out?’ and I felt like this year the walks were down, the strikeouts were still up, everything was still good. It just all came together, and it was really fun.”

The changes Ray made alongside coaches Pete Walker and Matt Buschmann had tangible results. He cut his walk rate by 11.2%, he upped his strikeout rate by 5% and he produced the highest swing rate of his career at 52%.

In the short term, the Blue Jays need at least one more premiere pitcher in their rotation to compete within the American League East. Ray would certainly fit the bill, but there may be an ounce of trepidation wondering if 2021 was his Cinderella season.

The changes he made this year  — such as a much more aggressive approach by attacking hitters with first pitch strikes — indicate that 2021 wasn’t just a one-year fluke. But how many more Cy Young-calibre seasons does Ray have left in the tank? And after a year of scouting him heaving, will the league wise up to his approach?

Starting pitchers typically reach their peak in their late 20s and early 30s, which is exactly where Ray profiles. A five-year deal would take him through his age 35 season, which comes with its risks.

However, if the Blue Jays feel like their competitive window is in the here and now and starting pitching is a priority, they won’t find much better options on the market than Mr. Ray. They’ll just have to pay through the nose to keep him.

The case for Semien

Dollar for dollar, there wasn’t a more valuable free agent starting pitcher contract than Ray’s $8 million one-year deal with the Blue Jays. On the position player side, they also inked one of the best free agent deals with Semien’s one-year $18 million pact.

The 31-year-old played all 162 games for the Blue Jays this year, and it was his second consecutive non-pandemic shortened season where he played every single game on the schedule.

Semien impacted the game in a variety of ways; playing Gold Glove calibre defence at second base, as an astute baserunner, and as one of the best hitters in the American League in 2021.

The SoCal native bet on himself by taking a one-year pillow deal with the Blue Jays, and he enters free agency as one of the most sought after infielders in baseball. Not only will Toronto have great interest in bringing him back, but expect juggernauts like the Yankees and Dodgers to be in play for Semien as well.

On a team riddled with young stars, Semien was a calming veteran presence for one of the youngest position player cores in MLB in 2021. Whether it was from his fellow infielder Bo Bichette, or Blue Jays president Mark Shapiro, Semien received ringing endorsements from his time in Toronto.

Playing alongside him up the middle, Bichette reflected on what Semien meant to him during this whirlwind 2021 campaign. “Everything,” Bichette said, fighting back tears. “He’s meant a lot to me.”

Even the Blue Jays president and CEO heaped praise upon the veteran infielder during the team’s end of season wrap-up press conference.

“I’ve seldom seen a tougher guy that plays every single day, that works harder than him, that’s more committed to being a consistent, dependable, reliable player and teammate,” Shapiro said.

“He is certainly a role model for all of us in the way we approach our jobs and for our players and the way they approach their jobs as well. It was a pleasure to watch him work, complete and play this year and exist in our environment as well.”

Whether it’s behind the scenes or you take a peek at his 2021 stat line, Semien was valuable both on and off the field for the club. And if the team only has $20-25 million earmarked for one marquee free agent, they’d be hard-pressed to find more bang for their buck than with Semien.

In an ideal offseason, the Blue Jays would bring both Semien and Ray back, but due to escalating arbitration salaries and less wiggle room in the payroll department, the likelihood of both players returning is low.

If the Blue Jays are going to put all their proverbial free agent eggs into one basket, it’s a wise move to bet on Semien in this case. He’s someone who’s produced at an elite level in the past, and his 2021 campaign only reiterated the talent he has.

On the other hand, there might be some hesitancy to re-sign Ray in the fear that his 2021 breakout campaign was an outlier. Neither free agent comes without risks, but a great deal of risk is mitigated with Semien vs. Ray.

As great as it would be to keep a top of the rotation starting pitcher, they’re only able to impact the game on only 30 occasions out of 162 games. Position players can be a game-changer every day on the schedule, as evidenced Semien, who played all 162 this season.

For a team like the Blue Jays that’s rich in prospect capital, they’d be better off playing on the trade market for a top tier arm rather than shopping in free agency. The better value for this team in the here and now lies in a marquee free agent of Semien’s calibre.

Now, the calculus changes somewhat if the Blue Jays land a big name infielder in trade like Jose Ramirez, but before the club ventures down that road, they need to make their best free agent offers first.

And if there’s one player they need to secure for the foreseeable future, it’s Semien.