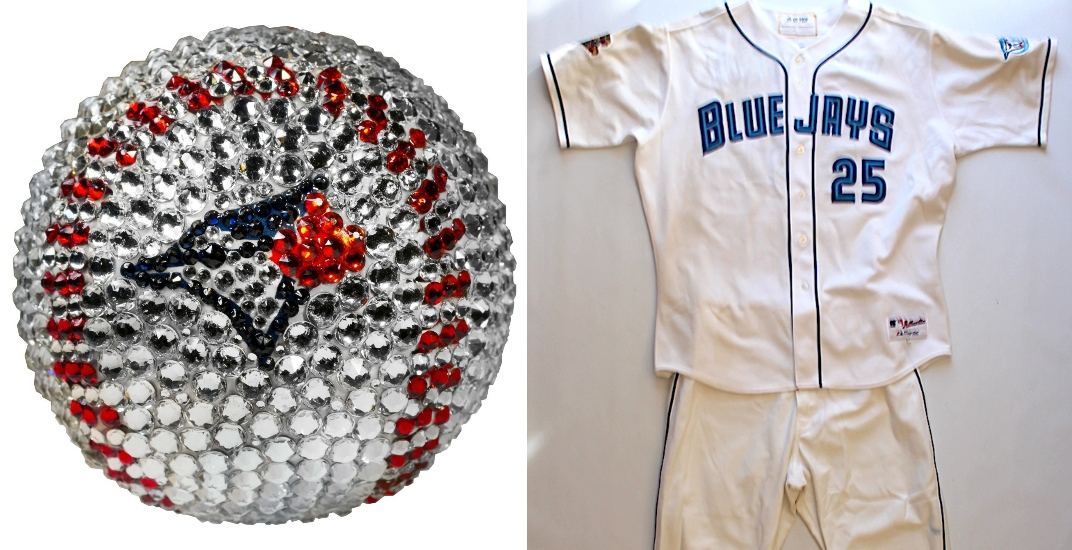 The Toronto Blue Jays have a few items at the top of their holiday wish list, namely starting pitching. Fans might have visions of Zack Wheeler or Hyun-Jin Ryu dancing in their heads, but what else can you get the Jays devotee that has everything?

A ridiculously overpriced gift, of course!

Nothing says you love someone like dropping an exorbitant amount of money on merchandise which is priced hundreds or thousands of dollars more than it needs to be.

If money isn’t an issue this holiday season, here are eight gift ideas for the bougie Blue Jays fan. 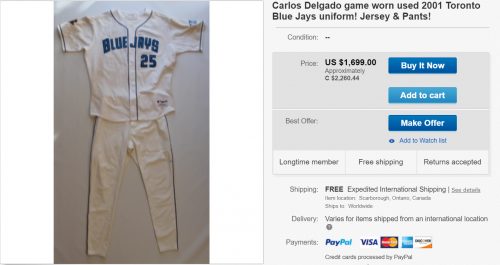 Game worn jerseys are fairly popular on the secondary market, but it’s very rare that you find a full uniform for sale. Here you can buy one of Carlos Delgado’s game-used jerseys and pants from the 2001 Blue Jays season.

The only problem? Unless you match Delgado’s measurements, this might fit like an oversized windsail on your body. 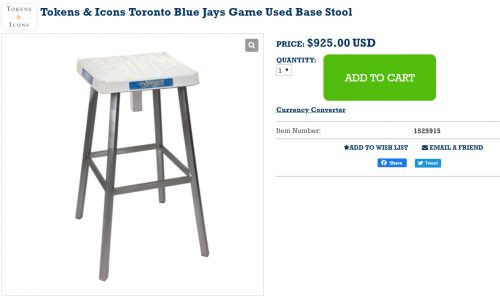 Game-used merchandise is cool, but it’s even cooler when it gets repurposed into furniture. Here’s a real Blue Jays base formed into a stool for the low, low price of $925 USD. 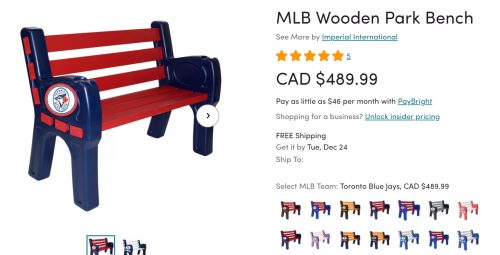 Baseball is a game of the “in between” moments, which means there’s a lot of of sitting around. Games can last anywhere from three to five hours, so you’ll need somewhere to park your keister for a while.

Why not invest in this Blue Jays branded wooden park bench? It’s great for your front yard, backyard, or as a spot to contemplate why you sunk $500 on a bench.

When big moments happen at sporting events, it’s not uncommon for fans to get their hands on a piece of the stadium by any means necessary. We might question how one went about acquiring a seat back from the SkyDome, but Blue Jays legend Joe Carter put his name on this one and it could be yours for a cool $349.99 CAD. 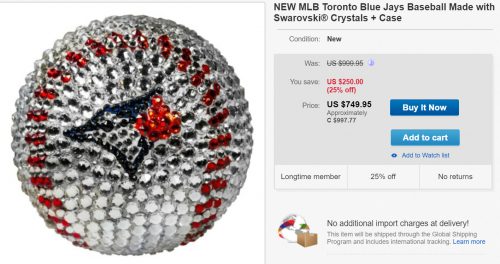 This might be the bougiest piece of Blue Jays merchandise of all-time: a baseball covered in Swarovski Crystals. There’s no practicality to this gift, but here’s the great news: it’s marked down to $749.95 USD! 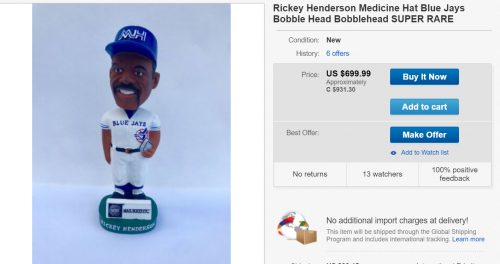 Part of the thrill of owning rare collectables is having something that no one else has. As far as scarcity goes, this one’s up there. It’s a Ricky Henderson bobblehead given out by the Medicine Hat Blue Jays, a rookie affiliate of the Blue Jays organization.

There might only be a half-dozen people in the world looking for this Henderson bobblehead, but if this is your holy grail (or someone on your holiday list), go get it. 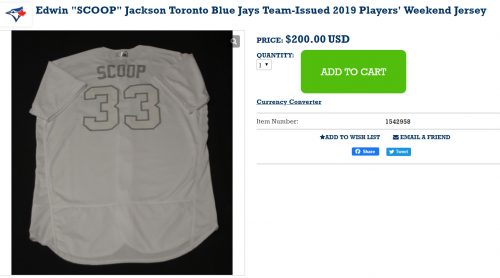 Sadly, the Edwin Jackson era in Toronto only lasted two months in 2019, but you can commemorate this eight-week stretch with his customized Players’ Weekend jersey.

What’s even more depressing is Jackson never wore this jersey because he was released by the team on July 19, while MLB Players’ Weekend took place in late August. On the flip side, it’s not often that you can own a jersey from a player who suited up for 14 (yes, 14) different teams. 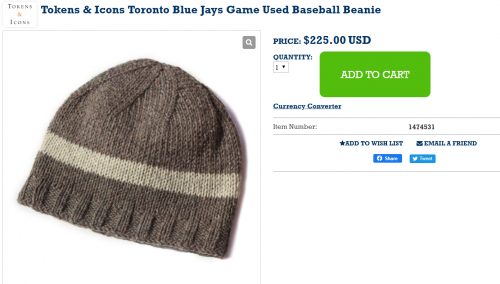 As far as toques go, this one is quite expensive, but the backstory on it is pretty cool. This cap was woven using the strings inside a game-used Blue Jays baseball. Yes, they took the innards of a Major League Baseball and stitched it into this nondescript beanie.

No one will ever know this cap is made from baseball guts, but at least you’ll have the satisfaction of knowing a Major League Baseball enjoyed a second life as a winter accessory.