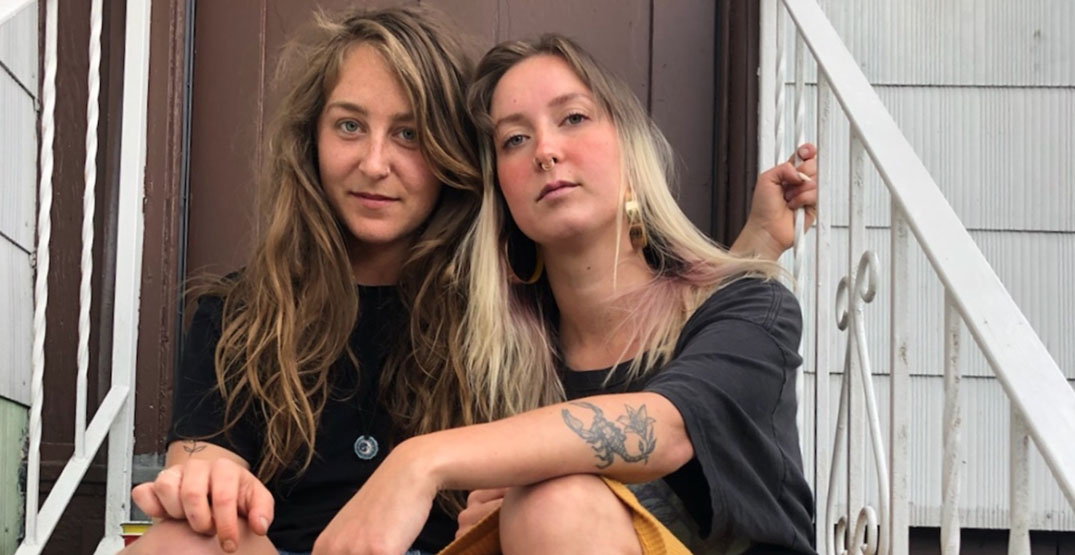 Two East Vancouver women are speaking out after they received threatening letters from a neighbour over sunbathing topless in their backyard.

Roommates Deuphine Apedaile and Cassy Conley contacted police, but they told Daily Hive they were puzzled by officers’ advice to cover up.

During the first few weeks of the coronavirus pandemic in April, the women spent time in their backyard gardening and tanning — sometimes topless. They mostly lay on their stomachs, and would often cover their breasts if they got up to go into the house, they told Daily Hive in a phone interview.

But later in April, they received a disturbing handwritten letter in their mailbox.

“It was incredibly vulgar. The most vulgar way I’ve ever heard the female body described in my entire life,” Conley said.

Towards the end of the letter, the sender threatened to “make them famous” for what they’re doing.

The female officer Apedaile spoke with on the phone was “very sweet,” but suggested the roommates should “probably just cover up.”

When officers came in person to their home and looked at the backyard, Apedaile said a male officer also suggested the women not sunbathe topless.

“It was sort of dismissing what the actual real issue was,” Apedaile said.

She also questioned why the officers suggested they cover up when being topless is not illegal in Canada, even in public spaces.

“We were both raised by hippie moms who were super body positive,” Apedaile said. “To be naked did not mean to be sexual, or to be sexualized.”

But the anonymous letter-writer wasn’t done with the Apedaile and Conley.

As the weather warmed up in May and the pair spent more time in the backyard again, they received another disturbing piece of mail — this time typed out. The envelope contained photos of Apedaile watering her garden topless, and the sender threatened to post the photos all over the neighbourhood since they “like to show off so much.”

Once again, the roommates contacted police.

The second pair of officers that came to their home were more validating of Apedaile and Conley’s experience, they said. But ultimately, the officers told the women not much could be done, Apedaile said. She was confused because it seemed clear the sender lives in the apartment building across the alley based on the camera angle.

Sgt. Aaron Roed with the Vancouver Police Department told Daily Hive that the matter is an “ongoing investigation” and that he’s limited in what he can say.

“We are in contact with the complainants who do not feel a threat for their safety but do want the police to be aware of this incident,” he said in an email. “Detectives from the VPD Sexual Investigation Section as well as patrol officers are investigating.”

Roed did not answer questions about what efforts have been made to find the sender or why officers suggested the women cover up.

Courts have upheld women’s ability to be topless in both Ontario and BC. Vancouver lawyer David Butcher, who represented a woman in 2000 who went topless to a Maple Ridge swimming pool, explained that a landmark Ontario case from the 1990s created a test of whether toplessness is indecent or not.

In 1991, 19-year-old Gwen Jacobs was stopped by police while walking down a Guelph street without a shirt. She was initially convicted of committing an indecent act, but was later acquitted on appeal in 1996. The judge ruled that baring one’s breasts is not an inherently sexual or indecent act, and further, nobody was forced to look.

“The answer lies in assessing the context,” Butcher said. “Are these acts outside the tolerance of the ordinary Canadian person? And are they doing any harm to anybody else?”

The answer could be different at Wreck Beach compared to inside a mosque, he said.

Further, if a woman were hypothetically charged with indecency for not wearing a shirt, Butcher expects an easy argument to put forward would be that men are permitted to go shirtless in the same scenario, and Canadians are guaranteed equality under Section 15 of the Charter.

Since Apedaile and Conley received the photos, they haven’t gone topless in their backyard. It’s partly because they feel they’re being watched.

“I hope we can feel more safe in the future,” Conley said, adding the incident has sparked conversation about consent, women’s bodies, and shaming.

Despite feeling violated by the photos taken while they were topless on their own property, the roommates say they feel grateful for the support they’ve received after sharing what happened.

“It’s important to speak out,” Conley said. “My initial reaction when I read the letter was to rip it up and be silent.” But that’s part of the problem, she continued, because being silent means nothing will change.