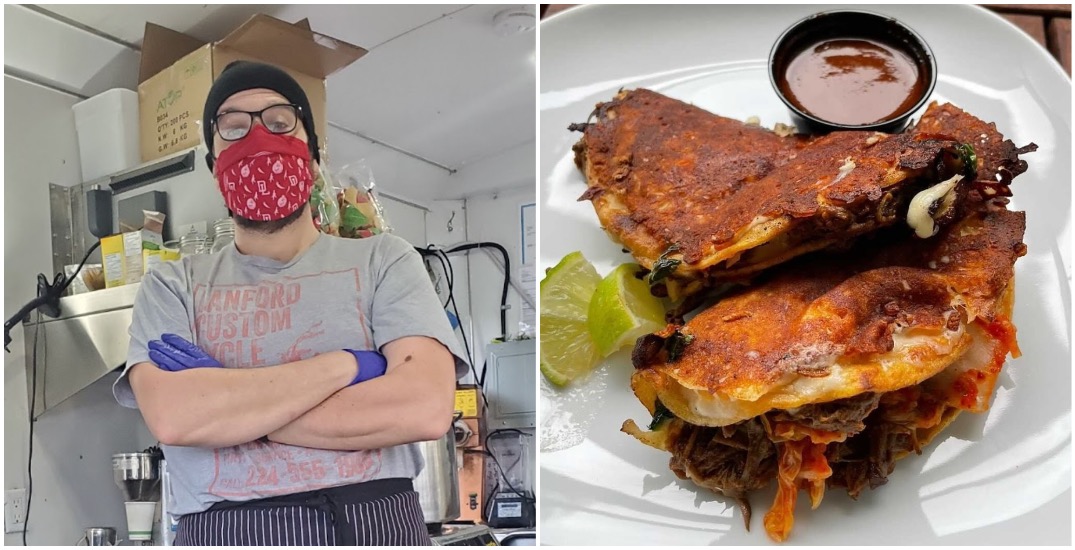 Food trends come and go but the taco never leaves. Everybody loves tacos.

Burritos, tacos, quesadillas — they’re all great and now there’s a new style that has taken Vancouver by storm. The city can’t get enough of the birria taco.

This now beloved item’s rise in popularity in Vancouver is definitely owed in part to Kevin McKenzie. Him and his cousin loved quesabirria, but had to make it at home each time because there simply was nowhere in the city to find it. Finally, like every good entrepreneur, they saw that gap in the market as an opportunity.

McKenzie and his cousin Kelly started making tacos in parking lots to build some hype and get people familiar with them. That was the very beginning of Top Rope Birria.

Vancity has been supporting people in our communities since 1946, like local food creators. As part of our Made in Vancouver series spotlighting local businesses and artists, we talked to birria baron Kevin McKenzie about his unorthodox  beginning and where he wants to go.

Kelly already owned and operated the portable Green Coast Coffee, and they just decided to install a flat top and start slinging tacos. It was initially a COVID pivot with the hope for a little extra income, and just hoped people would show up to try it.

“They did and I’ve spent the subsequent months refining the recipe, hiring staff, looking for food trucks, and potential spaces, and learning how to run your own small business,” McKenzie told Daily Hive.

“It’s been a wild ride and we are super grateful to the people who have embraced and supported our work.  We love what we are doing and can’t wait to show everyone what’s next!”

Birria had such little impact in Vancouver, and Canada in general, that the inspiration had to come from somewhere else. Unsurprisingly, the concept came from family.

“My aunt had lived in Jalisco province for many years, and had often told us about the incredible street tacos, and birria de res, and with a few phone calls and emails to some friends and contacts in Guadalajara, the recipe began to take shape,” said McKenzie.

People might not know what to expect from a portable coffee shop offering tacos with names you have never heard of, but rest assured, the food is incredible and the atmosphere is welcoming. McKenzie tells new customers exactly what to expect for their first time rolling up to Top Rope Birria.

“Great tacos, friendly service and a good vibe,” he said.

“We like to play tunes and chat up our guests.” And there definitely seems to be plenty of first-timers and regulars because the demand for these tacos is incredibly high.

“The lines can be longer at times but we aim to make it as fun as possible to wait for your tacos,” McKenzie added.

“Quesabirria tacos which are basically Instagram, levelled up combination of birria de res and tacos Dorados,” he added.

Your mouth is probably watering and you’re now craving tacos — at least you know where to go — and what to order.

“Hands down the cheese skirted quesabirria tacos,” he told us.

These two didn’t make lemonade out of lemons when COVID hit and hurt their business. They made tacos out of a coffee cart. The Top Rope Birria team can reflect on their success and realize how well it’s worked out for them. They don’t take it for granted.

“Keeping everyone safe is our absolute tip priority,” said McKenzie.

“That being said 99.9% of our guests have been absolutely wonderful, respectful and lovely. I recognize that we are very lucky to not be affected by the indoor closures and other challenges affecting restaurants in our community. We will continue to try to support these restaurants with promotion and patronage,” he added.

Follow Top Rope Birria on their Instagram page to know exactly where they’ll be in the city for the inevitable moment your taco craving strikes.